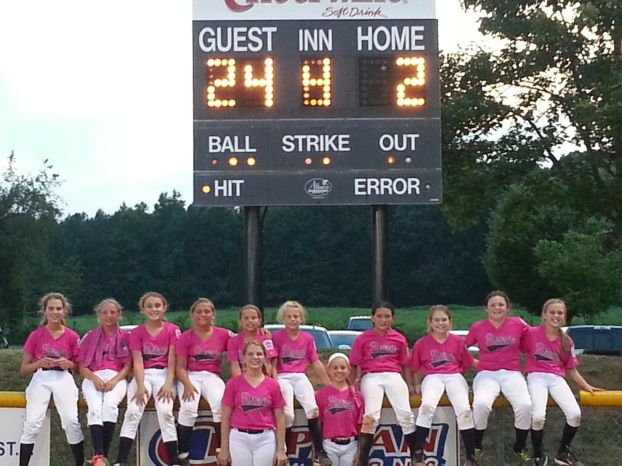 SALISBURY — League president Dan Wales has been involved with Rowan County Little League 25 years and is as old-school a baseball guy as there is.
But after some initial skepticism, he’s been won over by softball. Now he’s convinced Rowan Little League softball teams are going to do something no baseball team representing RCLL has ever done — namely, win the state championship.
“I’m going to guarantee two state titles,” announced Wales with a Joe Namath-esque proclamation. “This is the year for Rowan Little League. These girls are something else. They’re the biggest thing since sliced bread.”
Pre-sliced bread has been popular since Otto Frederick Rohwedder invented the concept in 1928. Rowan Little League softball has significantly less history. While Little League baseball is celebrating its 75th anniversary and Rowan Little League has been around 60 years, softball definitely is a new kid on the block.
“It was five years ago when the city (of Salisbury) came to us and wanted us to take over the softball program,” Wales said. “Jeff Bernhardt and Jeff Link, those were guys that got it started — and here we are now.”
It’s easier to make a splash in softball for two reasons — not as many teams as in baseball and much wider boundaries. A number of the girls representing Rowan Little League come from Kannapolis and Mooresville.
Rowan Little League softball started to make noise last season. The 12s won District 2 and finished second to Wilkes in the state tournament.
Rowan’s 10s qualified for the state tournament as District 2 runners-up and nearly won the state. They lost a heartbreaker to District 2 champ East Surry in the state title game.
“We won that game four times, but we lost it five times,” Wales said with a groan. “We were one out away. It was crushing, but we knew we’d be back.”
They are back.
Based on the scores, Rowan has powerful softball teams. At their core are the area travel-ball squads, which play early and often. These girls already have a wealth of experience and they’ve had coaching from people such as Catawba’s Adrian Gantt, former West Rowan coach Elizabeth Clarke and former Catawba football coach Chip Hester, to name just a few.
“Some of these girls already have played hundreds of games together, and it shows,” Wales said. “They play around the clock. What I like most about them is that as dominant as they are offensively, they are even more dominant defensively.”
There are three Rowan Little League softball teams — 8U, 10U and 12U.
The 8s and 10s already have cruised to this summer’s District 2 titles — the 8s outscored their opponents 88-9 — while the 12s are contenders in the district.
The 8s and 10s are the teams for whom Wales guarantees state championships. They’ve battered the other perennially strong teams in the district, such as East Surry and Davie.
“Softball has just been good for Rowan Little League,” said Wales, who added that the league hosts 18 travel-ball tournaments annually at its home in the Community Park off Hurley School Road. “We’ve got a great complex and great people, and we’ve got a great deal with the city and the Parks and Recreation Department of the city of Salisbury. They prep and maintain the facility.”
The only bad news is the price of success is high.
The Rowan Little League girls will have to travel a long way in pursuit of those state championships. The 8U team is headed to Brevard, while the 10s are headed to Franklin, even deeper in the mountains. Tournaments in Brevard and Franklin aren’t back-and-forth drives. That means extended hotel stays for a lot of people and a lot of dollars.
Rowan Little League has saved some money from those travel-ball tournaments, but Wales said softball’s runaway success threatens to “cripple” the league’s financial reserves.
“I’ve already booked $8,300 in rooms in Franklin and Brevard,” Wales said. “There’s a lot of expenses, with the travel and a couple of sets of uniforms on top of the hotels. We’re estimating $13,000 for those two teams. These girls are going — the league will see to that — but we’d love to get the whole community involved.”

Rowan Little League is nonprofit and workers spent 1,000 volunteer hours per year on the league. Rowan Little League provides baseball for seven age groups as well as the three softball teams. Wales said in a typical year the league will involve 1,000 participants.
Rowan Little League is reaching out to the businesses and individuals to support the softball teams. The league is buying 4-by-8 banners for the Rowan teams to hang on the outside of their dugouts at the state events. Sponsorship is available at bronze, silver and gold levels. The bronze sponsorship is $200, the silver $350 and the gold $500.
Wales said anyone interested in supporting the girls with a tax-exempt donation should contact softball commissioner Dan Spicer or mail a donation to Rowan Little League, 1080 N. Lilac Lane, Salisbury, N.C., 28147.
The 8U team will be the first to go after a state title, followed by the 10s. As of Wednesday night, the 12s were still competing in their District 2 tournament.

SALVADOR, Brazil — They captured the eyes and hearts of a suddenly awakened soccer nation, who gathered in unprecedented numbers... read more