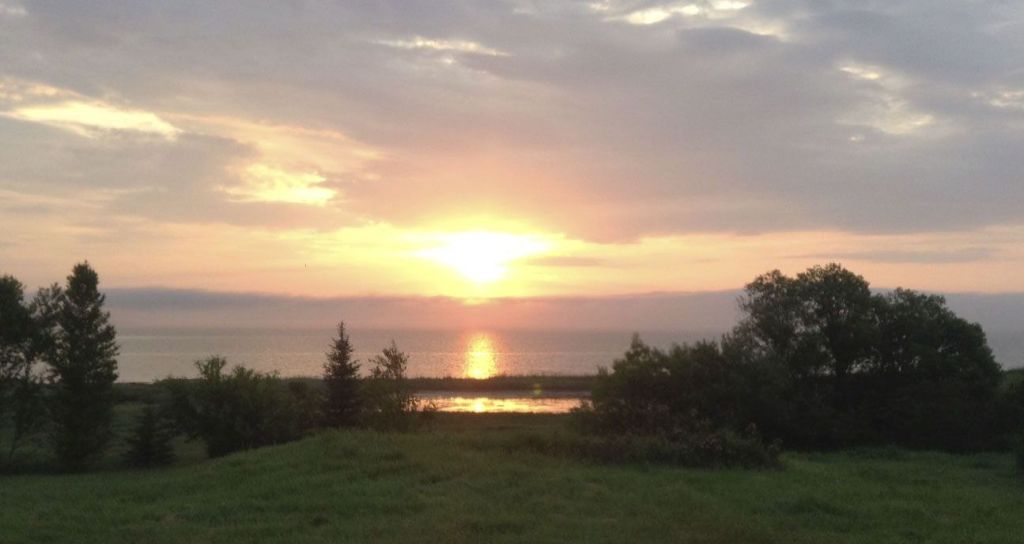 Today started at 2:50 a.m. Sunrise in Lubec, Maine today was at 4:50. I wanted to go out to the Quoddy Head lighthouse in hopes of getting a sunrise photo from there. It was a six-mile ride on my bike in the dark, so I had to get up really early. I got on the bike at 3:30 a.m. and off of it just after 6 p.m, — a very long day. I knew I needed to get the ball rolling with two 100-mile days, and somehow I did it. Today was as tough as any day I had on the bike last summer crossing America.
It was cold, windy and foggy at the lighthouse. I didn’t get the sunrise photo from there, but I did get a great series of photos of the lighthouse working In those conditions. Plus, I got a photo of the granite rock that states that the lighthouse is on the easternmost point of land in the United States. I got some good photos of the sunrise just north of the lighthouse just after the fog cleared enough to see it. Then I rode over to dip my wheel in the Bay of Fundy in Lubec. It was impossible to do such a thing in the angry sea at the lighthouse. Plus, no one else was there. I looked around the historic city of Lubec for awhile. Canada is just across a bridge — New Brunswick is easy to see across the bay.
Back to the very nice room at the Eastland Motel. I loaded up the bike and headed out about 7:15 a.m, riding toward Ellsworth. It was very hilly as I retraced my ride from yesterday. Today’s ride was a little boring because I knew what to expect. A headwind hit me pretty hard from the late morning until late in the ride. Those endless hills were unrelenting. I was tired and a little sore from yesterday, and early-morning alarm didn’t help much either.
I rode back doggedly, concentrating quite a bit on getting up the hills. I grabbed the handlebars so hard that I have a huge blister on the heel of my right hand that just kept getting bigger as the day went on.
Highlights of the ride today including meeting Zoe Holland of Brattleboro, Vermont. She is the only long- distance cyclist that I have seen in two days. Other highlights were meeting Steve Tinker before he took the picture of the wheel dipping, and also Kaylee Johnson and Christina Williams at the last ice cream shop, just 14 miles from tonight’s destination of Ellsworth, Maine. Kaylee and Christina helped me find a decent deal on a room for tonight.
After 103 extremely hard miles, I got a very nice room at the Knight’s Inn. Abigail Johnson is the General Manager and I especially liked talking with Nick Umphreys who was working the desk. He told about losing 75 pounds and running his first half marathon. Since my ride is intended to raise the awareness of obese kids, Nick told me that he used to be one. However, he took steps to get his own situation under control. Thanks to Nick for a reasonable rate too.
I am all but out on my feet. Two ice creams helped during the day, but these two rides will cause me to slow down some over the next few days. Tomorrow, I will start the first segment of the ride south to Key West. Back to joining up with Adventure Cycling’s maps. I should be in Maine at least three more days. Off to the area that the President Bushes call home. They still have time to get me to stop in.