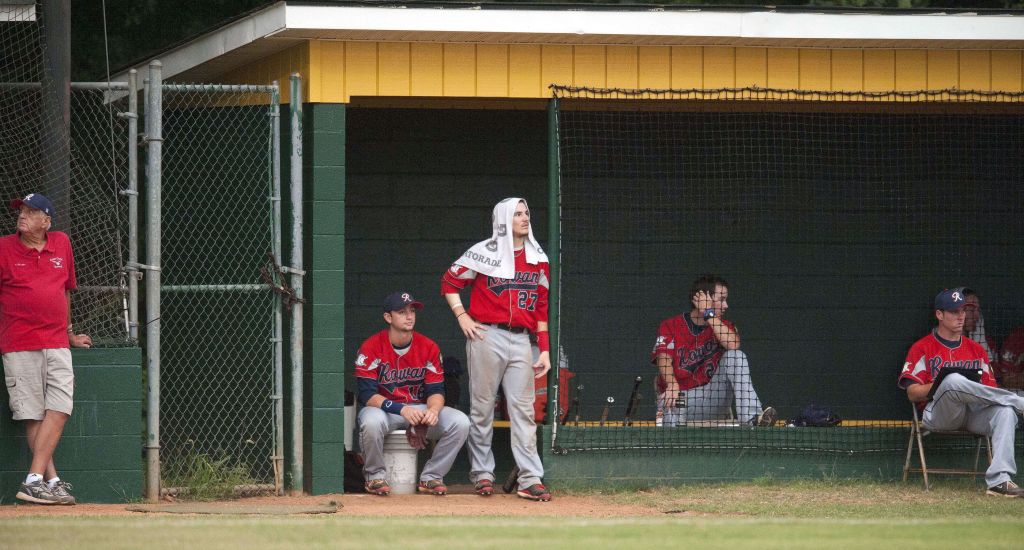 CONCORD — The good news — the only good news — was that power was restored at Newman Park at 4:15 p.m. on Thursday.
There was enough uncertainty concerning the success of that project, however, that plans already had been made to move Game 3 in the Concord-Rowan County first-round series to Concord’s home field at Central Cabarrus High.
Nothing good happened at Central Thursday where loyal fans were treated to 12 batters, two lightning delays and one downpour before it became obvious by about 9 p.m. that no more baseball could be played.
“Electricity, lightning — things that aren’t supposed to happen have happened,” weary Rowan coach Jim Gantt said.
Now Game 3 is reset for Newman Park tonight at 7 p.m. They’ll start from scratch and pretend Thurday’s mess never happened.
Rowan won Game 1 in the series 9-4 at Newman on Monday.
Concord pulled out a 7-6 victory at home on Tuesday to even the best-of-five series at a game apiece.
The power outage forced a break in the series Wednesday. Both pitching staffs got a rest, and Concord’s catcher got a rest.
The national anthem went smoothly on Thursday, and Rowan, which hasn’t lost back-to-back games all season, also started OK.
Harrison Baucom’s two-out double scored Riley Myers for a 1-0 lead in the top of the first. Myers was hit by a pitch by Concord hurler Kaleb Kluttz and moved to second when Luke Setzer walked.
But at 7:12, immediately after Rowan batted, umpires spotted lightning and cleared the field.
Lightning peppered the area for the next 30 minutes or so, but there was little rain, and hopes for getting the game in still seemed realistic.
By 8:25, the teams were back on the field. Rowan lefty Brandon White mowed down Concord 1-2-3 in the bottom of the first. Then Rowan had two out and Jeremy Simpson at first base when lightning, much closer and more intense, revisited.
Shortly after that second lightning stoppage, rain arrived, with large drops first, and then a serious downpour.
With the clock reaching 9 p.m., and no letup in sight, umpires called the game.
Several issues had to be resolved during a meeting of the minds of coaches and athletic directors, including dealing with rainchecks for fans who had paid for a Game 3 Concord home game that has now become a Game 3 Rowan home game.
Another issue is that the second round looms, with opening night in that series scheduled for Sunday. Both Concord and Rowan would like to have a reasonable chance to win in the second round against a Southwest Division team, but whoever survives this series, which must end Saturday, will be at a serious disadvantage, with a depleted pitching staff.
Provisions for a doubleheader needed to be made, and there was serious discussion of playing two games today. The reason that didn’t happen was that one game would have to be played early, and, with water beating down in Concord and reports of heavy rain in Salisbury, neither team was certain it could have its field ready for an early game.
As it stands now, the teams will play Game 3 tonight at Newman Park and will decide after that game how they’ll handle Saturday. They’ll have to schedule a doubleheader, with one game at each site. Game 4 would be at Central, while Game 5, if necessary, would be back at Newman Park.
If only three — or four games — can be played because of weather, the winner of Game 3 wins the series.