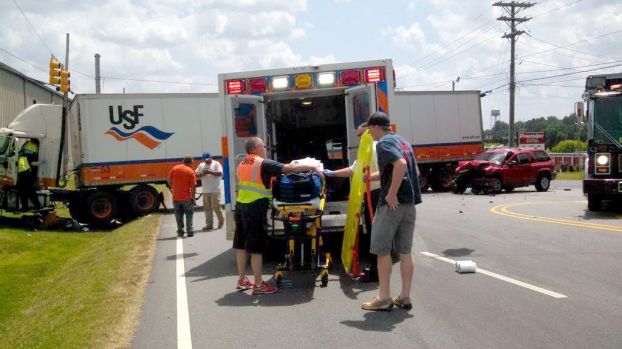 Rowan teen charged after crash on US 29

A China Grove teen was charged after he collided with a tractor-trailer at the intersection of U.S. 29 and Grace Church Road on Tuesday afternoon.
N.C. Highway Patrol Trooper D.R. Morgan said Joel Boyd-Smith, 18, was traveling south on U.S. 29 in his 2003 Dodge Durango when he drove through the light.
The tractor-trailer driver, Earl David Barringer, 57, of Charlotte, was turning left from Grace Church Road onto U.S. 29 heading north. He was driving a 2006 International truck for USF Holland.
The crash sent the tractor-trailer careening into a fence at LKQ. The truck stopped just short of crashing into the LKQ building.
Boyd-Smith told officials he thought his light was green and kept going, however witnesses confirmed the light was actually red. The teen was charged with failure to stop for a red light. He and Barringer were taken to the hospital via ambulances. Neither were seriously injured. There were no other passengers in either vehicle.
The trooper said Boyd-Smith didn’t indicate the sun was in his eyes and he was not speeding. He just thought the light was green.
Morgan said it is unclear if Barringer was wearing a seat belt. He was not thrown from the tractor-trailer, but witnesses said he was lying in the floorboard when they opened the door.
The crash occurred at 2:35 p.m. and led officials to detour traffic onto Grace Church Road and Roseman Road until the vehicles could be towed from the scene.
Dwayne Jordan was traveling beside the Durango and said he slowed down for the red light, but the driver of the Durango just kept going.
Jordan said some passersby stopped to help Boyd-Smith out of his vehicle. The motorists had to pull on the door, which had some damage, in order to get it open.
Jordan jumped out of his vehicle to help the tractor- trailer driver, who he said, had cuts to his head.
Locke Fire Department, Rowan County Rescue Squad, Rowan EMS also responded.
Contact reporter Shavonne Potts at 704-797-4253.

Your daily look at late-breaking news, upcoming events and the stories that will be talked about today: 1. GOP DECLARES... read more