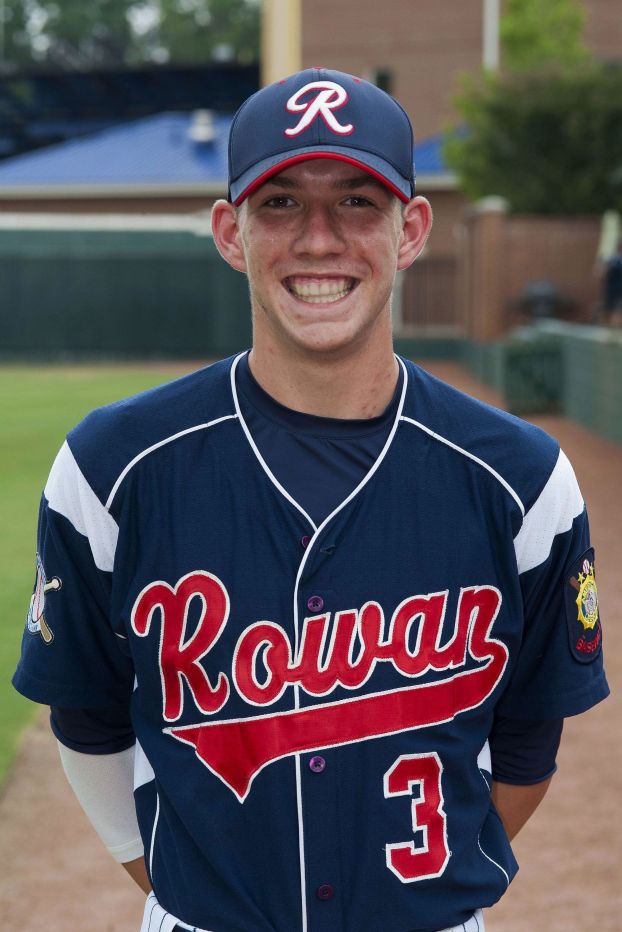 CONCORD — Concord Post 51 absorbed Rowan’s best counter-punch and escaped with a 7-6 win Tuesday night.
The win was significant because it ties up the best-of-five Area III opening playoff series for Concord (9-13) at 1-1 and gives them renewed hope against the top seed in the division.
“It’s a brand new series now and we get another home game. Concord Coach Tommy Small stated. “We can go up there and sneak another one then we can come home for a chance at a clincher,”
It was not a textbook performance for either team as Rowan gift-wrapped four unearned runs for the host team in the first inning. Concord wasted a number of scoring chances with bad base running but still led 6-2 after six.
Rowan (18-6) then took their best shot in the top of the seventh off starter Tyler Thomas and reliever Nelson Bradshaw, striking for four runs on three hits to tie the game at 6-6. A two-run double to right by Harrison Baucom made it 6-4 then Dustin Ritchie’s ground out scored another run. Michael Pinkston singled to knot the score at 6.
But Concord refused to fold as they notched the go-ahead run in the bottom of the seventh off Rowan reliever Heath Mitchem with two outs. Thomas drew a walk then Mitchell Helms singled. Lead-off hitter Jesse Klepper then capped a perfect five for five night with a single to center to give his team the 7-6 lead.
“We kept giving them runs,” Rowan Coach Jim Gantt noted.“Our bullpen did a good job off and on but the walks scored and that just killed us. But we’ll just keep going. We had our chances and battled back but it wasn’t enough tonight.”
Rowan was their own worst enemy from the outset as they committed three errors , issued two walks and gave up three hits, all in the first inning. When the dust settled they were down 4-1 and starter Chase Jarrett was lifted after just 1 1/3 innings.
Rowan scored one in the fourth on Ryan Jones’ sacrifice fly but Post 51 scored one of their own in the fourth then made it 6-2 in the sixth with yet another unearned run.
Corey Fries came on as the fourth of six pitchers used by Rowan in the sixth and found himself in a bases loaded jam with two outs and Concord slugger Nick Coble at the plate. Fries seemed to be off the hook when he induced a hard grounder to short by Coble. But Jeremy Simpson couldn’t reel it in and the unearned run scored.
Reliever Kaleb Measimer shut down Rowan in the eighth then Coble came on in the top of the ninth to notch the save. He ended the game with the tying run on first by getting Pinkston to look at strike three. Bradshaw got the win despite giving up the tying runs.
Small was pleased with all of his pitchers especially lefty Thomas who dodged some major bullets with six solid innings. “Tyler was kinda shaky but he finally settles in like he always does,” Smalls said. “Our idea was to pitch them in, pitch them in, pitch them and make them beat us.”
Small did lament that his team left 11 runners on base, was caught stealing three times and hit into two double plays. “We sure could have made it easier on ourselves.”
Rowan did manage 10 hits on the night led by Riley Myers and Simpson with three each. The 14-hit Concord attack was topped by Klepper with his five-hit performance while Thomas went three for three and drove in a pair.
The series now returns to Newman Park tonight with lefty Brandon White scheduled to start for Rowan County. Regardless of the outcome they still will have to make another trip back to Central Cabarrus High field because of last night’s setback.