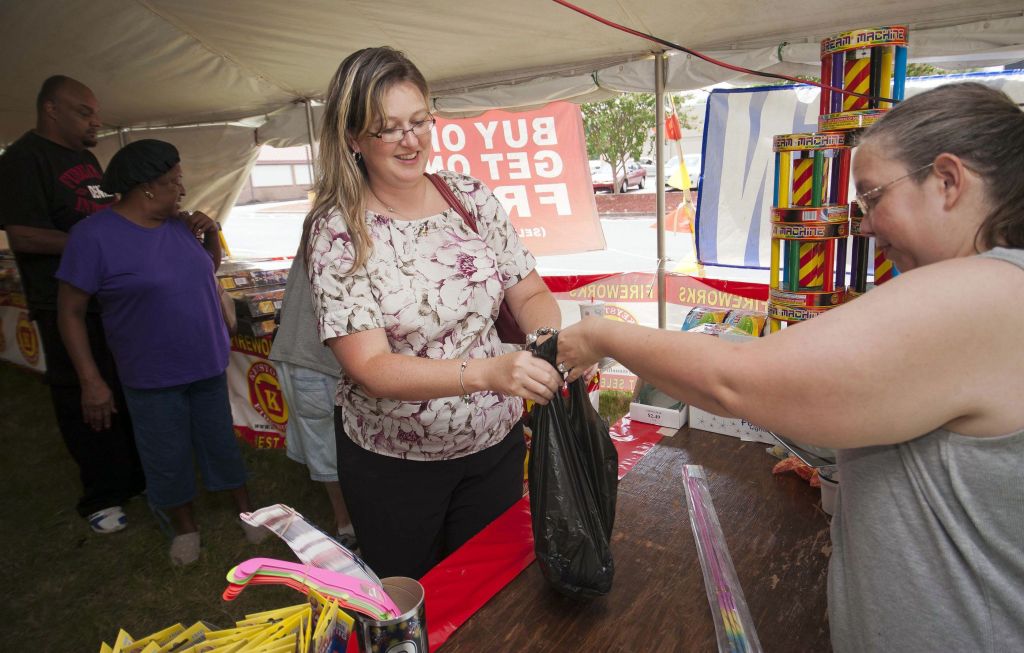 Pattie Jenkins shelled out more than $200 Tuesday in the Keystone Fireworks tent propped up beside Burger King off Jake Alexander Boulevard.
Jenkins and her son, Marcus, hauled out a diverse arsenal of exotic fireworks to her Chrysler 300 with a smile on her face.
“For my grandbaby (Marcus Jr.), I’ll shell out anything,” Jenkins said. “Last year, he was pretty enthused about it. I come to the tents about every year. I was going to South Carolina, but then I changed my mind.”
Steve Woollard runs the Keystone Fireworks tent with his wife, Angela, and said business has been steady.
“We’ve had a pretty steady flow (Tuesday). The 3rd and the 4th is when it really picks up. We love doing it,” Woollard said.
Keystone Fireworks slowly increases its hours the closer it comes to the holiday, Woollard said.
Everything from Mammoth Smoke devices to Freaky Tiki sparklers to bundled fireworks assortments are offered under the Woollard’s big tent.
“We have to be real careful of what we sell because of noise ordinances and height ordinances,” Woollard said. “It’s for safety. The law is the law, and if you don’t stick with it, you pay the price.”
Many of Woollard’s customers this year are repeat customers.
“They seem to like what we had last year and have come back,” Woollard said. “We’ve sold the sparklers to families, but we’ve sold the big packages, also.”
Despite hard economic times for many families, Woollard said people are not afraid to have a little bit of fun.
“We all need that,” Woollard said.
Jennifer Wilson walked into Keystone Fireworks and knew exactly what she needed for her 8-year-old son, Sam.
“(Sam) loves the smoke bombs,” Wilson said. “I’ll probably come back because he will use up what I’m buying already. He doesn’t play with matches. We light them and he plays with them.”
According to Salisbury Police Captain Melonie Thompson, any firework “that doesn’t come off the ground is legal.”
“You are in close proximity to businesses and homes. The fireworks can land on rooftops,” Thompson said. “Because it has been so dry, there is a fire hazard.”
On the night of the Fourth, Thompson said officers usually end up responding to a large amount of calls of shots fired, which ultimately end up being firework detonations around the city.
“It’s better that people go and find a place like Tamarac Marina or Faith or the Kannapolis ball field to enjoy the big fireworks,” Thompson said. “They can get permits and do that kind of thing on ball fields, if people really want to have fun and enjoy the fireworks.”
Since the fireworks law is the same statewide, the same restrictions are in place regarding the legality of fireworks outside the city limits.
According to state law, explosive caps fired in toy pistols, snake and glow worms, smoke devices, sparklers and trick noisemakers, including poppers, are allowed.
The Rowan County Sheriff’s Office is urging citizens to remember fireworks are dangerous and should be handled by professionals.
According to the U.S. Consumer Product and Safety Commission, there are nearly 9,000 emergency room-treated injuries associated with fireworks a year.
Safety tips include never giving fireworks to small children, keeping a supply of water close as a precaution as well as making sure the person lighting the fireworks is wearing eye protection.
Fireworks should only be lit one-at-a-time, and a person should never attempt to relight a “dud.”
The fireworks need to be stored in a cool, dry place away from children and pets, and those attendees at major fireworks events should always stay at least 500 feet away from the action.