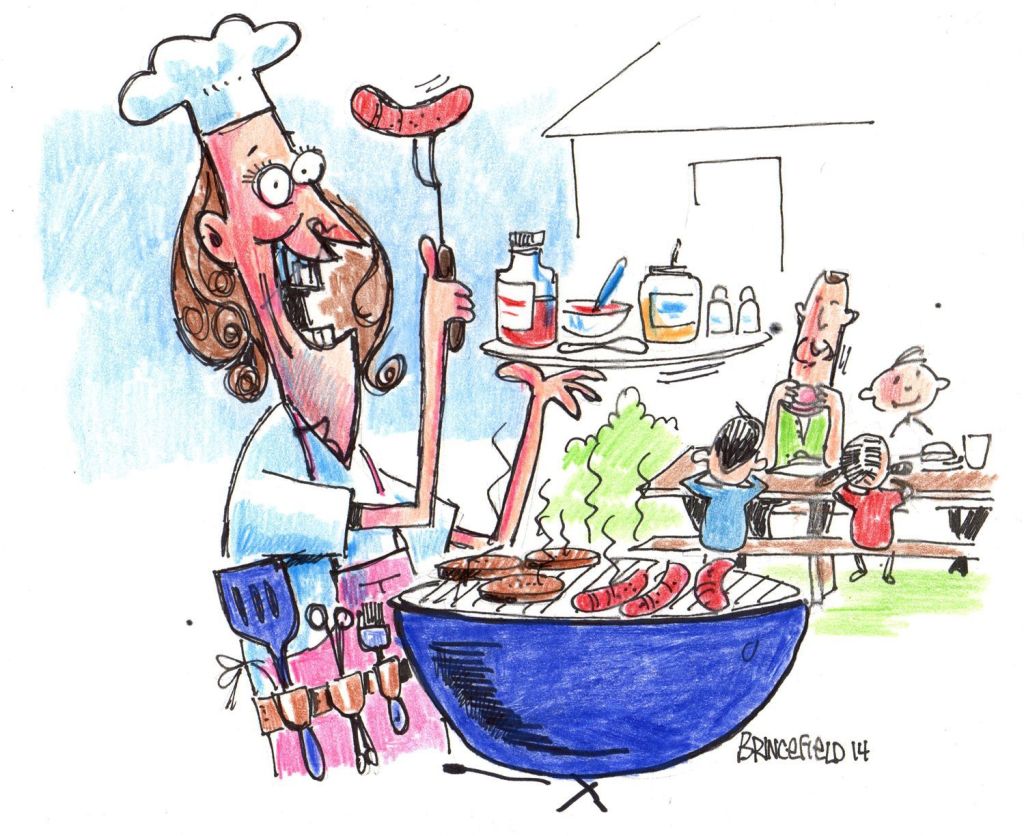 Summer is officially here and the 4th of July is Friday. That’s your cue to start grilling.
Grilling adds flavor and color to foods and saves you from heating up your kitchen. It’s the way to cook when camping or vacationing or hanging out on a deck.
Cyndi Allison is a grill maven. She has about 18 grills, down from 25, and she blogs about grilling. Companies send her grills, sauces, tools, you name it, to try. She fills out forms, gives feedback and often adds the information to her blog, http://barbequemaster.blogspot.com.
What started this flaming addiction? Allison explains: “When I was a kid, I was making my own breakfasts, which was always Pop Tarts. One time the corner of it got caught in the toaster and caught on fire while I was watching cartoons. So then I was the dish washer.”
Eventually, she got to grill outside, where there was less chance of burning the house down. She started with that old standby, hamburgers.
Her most recent project was for Arby’s, which has a new brisket sandwich. They hired her to cook a brisket herself and make a sandwich, then try Arby’s version, and post on her blog about how the two compared.
She’s has blogged about Sears and McCormick spices. Once, Weber, the grill people, flew her to New York to see the rollout of their new products.
She’s reluctant to name her favorite grilling method, because she’s tried so many grills, but charcoal usually wins out. Her favorite basic grill is the kettle-style, made by Weber and many others, a grill with a domed lid and vents to help control the heat. She suggests buying a known brand because the better grills can last a long time. “I’ve used one for 18 years and it blew out of the back of my pickup once. It cracked the handle, but it kept working just fine.”
When her sons went off to college, they each got a Smokey Joe, a miniature version of the kettle, on three short legs. “It can hold three steaks and four or five hamburgers, depending on the size.” It’s also portable.
If you like to smoke meat, she says the investment in a smoker is well worth it. She enjoys smoking turkeys and pork butts.
Allison said there are many easy things to cook on a grill, beyond hamburgers and hot dogs, although “you can’t beat a grilled hot dog.”
She likes to use brats, “Stick some holes in them, simmer them in a mixture of beer, butter and onion on the side of the grill until the sausages look a little gray. Then put them on the grill to get the marks and some smoky flavor.” Allison said cooks could boil their brats a day before and poop them on the grill at meal time. “With a potato salad, you’ve got a meal.”
The key to a good hot dog, she said, is good chili. And a good burger is easy. Add a little Worcestershire sauce, some zesty Italian dressing and a little lemon pepper.
Allison cooks chicken, ribs, pork butt, shrimp, summer and winter vegetables. “I can’t think of anything you can’t do on a grill, even frozen pizza.”
Allison is a member of an exclusive group called Winter Grillers. Membership is based on how cold it is outside while you are grilling. One member was out in 20-below temperatures. “That’s a little low for me,” Allison says.
There are about 500 members, but only a select few go to Roaring River Resort in Cassville, Missouri, for a summer get-together. Yes, the Winter Grillers meet in summer. The resort belongs to griller Lon Colvin, and it’s near a state park. “It’s pretty remote,” Allison says. “There’s a bait and beer store nearby, but that’s about it.”
The grillers usually set up on a deck, where everybody grills something. They bring each other gifts, which have included special wooden boards with photographic images burned in. They have a very large penguin who gets mailed all around the country. He always collects souvenirs, like the Jimmy Buffet necklace Allison added.
The group is there to have fun, and grilling is only part of it. In the afternoons, they go out on the lake to cool off. The Colvins have a huge grill made to look like a pig that the group cooks on. A typical day may start with a dutch oven full of breakfast casserole. Later, one of the guys does salmon on a cedar plank. There’s chicken wings, of course, and ribs, mushrooms wrapped in bacon, grilled trout, even slabs of grilled cheese. And more, depending on who has brought what that they want to try.
Allison says she’s lucky to have the chance to try so many things for her blog. But she insists you don’t have to get fancy to make great food.