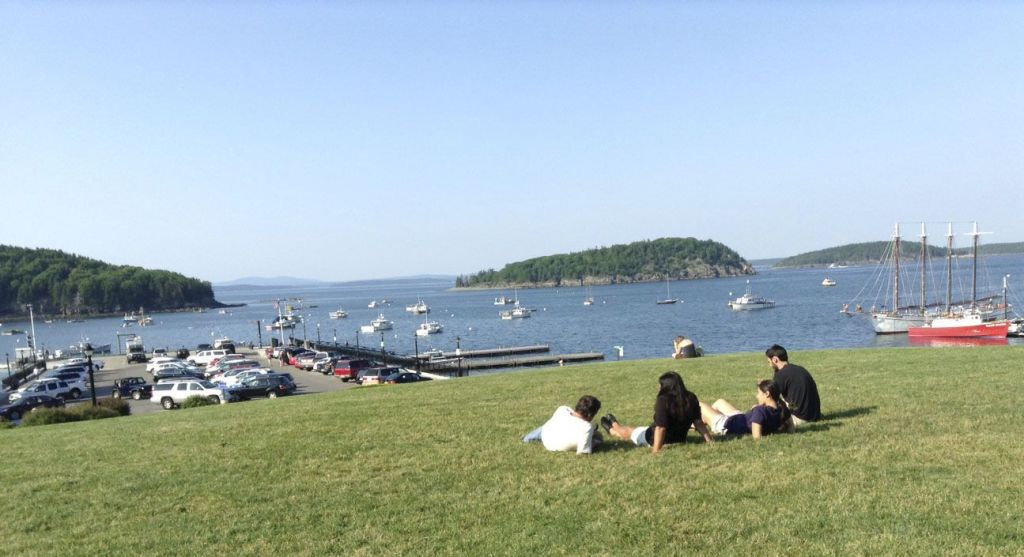 Today was the long-awaited travel day that kicked off my ride. Unlike last year, there were few hiccups. I started with a little apprehension this morning as my daughter Amber dropped me off in Greensboro. I sat on the plane wondering how this adventure will pan out and asking God in advance for some special care.
All three flights went well and were on time. I spent a couple hours in Philadelphia, an hour in Boston (which is 61 minutes too long for a Yankees fan), and arrived in Bar Harbor, Maine at just after 3 p.m. The last flight was highlighted by a fantastic flight attendant who made sure we had a little extra fun. Many thanks to travel agent Allison Tuck for figuring all of this out.
I was told earlier that I needed to pay $40 for a shuttle to my motel, but squeezing a dollar like I can, the free shuttle called the Island Explorer was just perfect. L.L. Bean has supported the Bar Harbor area with ongoing shuttle service that takes visitors to most of the area attractions.
That shuttle dropped me off at the Edenbrook Motel which is just about perfect. Then I walked on to Acadia Bike Shop to pick up my Surly Long Haul Trucker. Before leaving the “village” as locals call it, I had a slice of pizza and a scoop of ice cream. Blackberry ice cream served at the Rexall Drug store by a girl who thought I came in way too close to closing time. Never look at the clock right with a frown after a customer places an important order. Overall, I have found the locals to be very friendly and lots of others say Baahrr Haarbor like I do.
Before going to bed tonight, I will pack up most of my bike for an early start tomorrow. My hope is to make Quoddy State Park and dip the wheel before the end of a long day. At this point, I have been told that the roads aren’t very good, there is too much traffic, and there is no place to stay near the park. Doesn’t sound very promising, does it? Add to the whole situation that I have to ride more than 100 miles tomorrow to get it all done.
But I guess this scenario will qualify for a genuine start to an adventure. If tomorrow goes well, I will retrace the route, and try to return to Bar Harbor on Wednesday night. That remains the extent of my plans at this point.
Today was fun and I have already met some interesting people. Amy, the flight attendant, Harry, the bike mechanic, the shuttle driver who was so helpful, and girl at the hopping pizza place all are memorable.
It has been sunny and breezy since I got here, and is cooling off fast at almost 8:30 p.m. Time to get the bike packed and hit the sack for some much needed rest. Thanks for all the messages of support today.