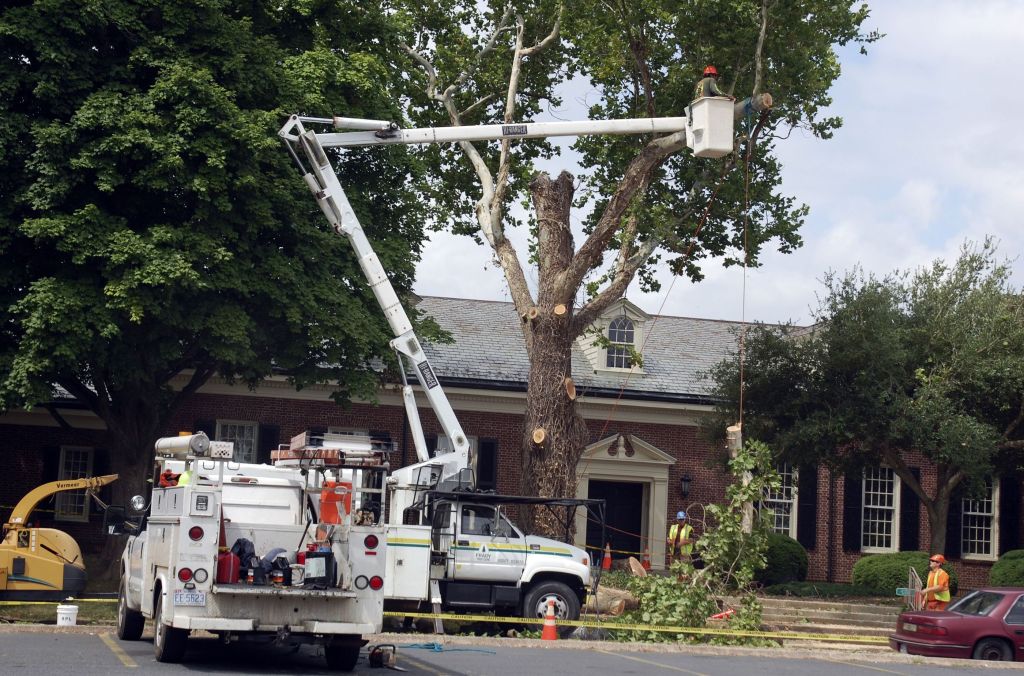 SALISBURY — A Lexington tree service spent much of the day Monday cutting down a stately sycamore in the front lawn of Rowan Public Library.
Library Director Jeff Hall said Hurricane Hugo took off the top of the sycamore in 1989, and it probably has been dying ever since. Several dead limbs from the high reaches of the tree had been removed over the years.
Much of the tree and its branches were hollow inside, signs of its diseased and weakening condition. Hall said library officials were worried the tree could someday fall onto the original part of the library, built in 1949, or parts of its could break off and injure a library patron walking close to it.
The library has more than 300,000 visitors a year.
Hall judged the sycamore probably was planted when the library was built or in the early 1950s, soon after its construction in the 200 block of West Fisher Street.
Photos did not show its being on the grounds of the Boyden House, which was on the site previously.
Sycamores are generally lowland trees, Hall said, finding it interesting that this particular sycamore sat on Salisbury’s highest point.
The Salisbury Historic Preservation Commission approved the tree’s coming down. Hall said the library had two certified arborists examine and testify to the tree’s deteriorating condition.
Frady Tree Care of Lexington cut the sycamore down limb by limb and section by section.
Nicholas Buchanan, a member of the tree service crew, said a 6-foot saw was needed to take on the tree’s huge trunk. A block-and-tackle system was used to bring the heavy limbs safely to the ground.
Hall said it was sad to see the sycamore disappear in pieces, but he promised that a new hardwood would be planted in its place.
“We can plant another tree,” he said.