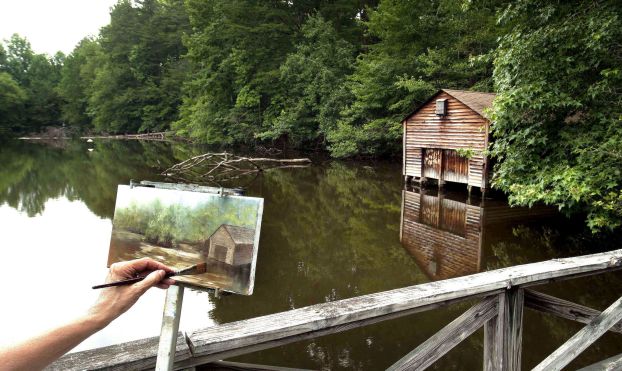 SALISBURY — At Frog Hollow, a Neel Road oasis of “hoppy” toads and jumping fish, Cathy Matthews found a perfect spot on the far side of the pond.

From there, she could look across the water toward the pier and boathouse, just down the hill from Frog Hollow’s log cabin.

“It’s nice to know it’s going to stay that way,” Matthews said, putting the final brush strokes on her scene.

Matthews is one of the Plein Air Carolina artists who recently have enjoyed access to properties protected by the LandTrust for Central North Carolina. The most recent site was Fred Stanback’s Frog Hollow, where a sign fastened to a tree on the path in says “Frog Hollow parking only. All others will be toad.”

Sharon Forthofer set up her easel close to that sign in a place giving her a nice look through the trees to the log cabin.

Forthofer said rather than paint flowers or a collection of trees that could be anywhere, she purposely wanted to provide a scene that said she was at Frog Hollow.

“Plein air” refers to certain styles of French impressionist painting of the late 19th century, focusing mainly on the effects of outdoor light and atmosphere.

The Plein Air Carolina artists meet every Friday at a predetermined place to paint — preferably outdoors, but when the weather doesn’t cooperate they might paint, for example, from photographs.

During the month of August at the Rail Walk Gallery, they will have a “Preserving Places” exhibit of their paintings from the land trust-connected sites.

Thanks to the land trust, they’ve also painted at places such as Cooleemee Plantation in Davie County and the Hoffner Organic Farm in Rowan County.

The artists are donating 40 percent of profits from any sales of their “Preserving Places” paintings to the land trust.

On the recent trip to Frog Hollow, the only complaint the artists had was the overcast day and, in Forthofer’s case, too much conversation.

“I’ve been doing more talking than painting,” she said.

Blackman painted her Frog Hollow scene from the wooden pier. She said the artists prefer having sunlight because of the shadows and interesting effects it can create, but she found some consolation in not painting under a hot, late-June sun.

“The breeze,” Blackman gave as her main reason for choosing the pier. “It’s been very pleasant.”

Blackman’s husband is a strong supporter of the land trust’s conservation goals. He loves the outdoors, camping and fishing.

“He just believes we need more land that we can enjoy forever,” Blackman said.

Blackman found it interesting she could hear the passing traffic on Neel Road, yet still feel a bit removed from civilization from her perch on the pier.

“This is really a nice thing to do,” she said of the land trust’s giving the artists access.

Joe Morris, development director for the land trust, said Stanback was involved in the construction of Frog Hollow’s log cabin when he was a young man, and the spot has been in the Stanback family for a long time.

Stanback nurtured and transformed the property from a meadow into the forest and ponds making it a tranquil retreat today.

The details haven’t been nailed down, but land trust officials are hoping to display the art at RiverDance, the land trust’s annual fundraiser at Salisbury Station.

“The idea of ‘local art’ just reinforces, to me, the idea of shopping local and strengthening local economies through sustainable purchasing,” Morris said.

For the artists, a return trip to Cooleemee Plantation might be in the works, Morris said, and the land trust would like to make other protected properties available to Plein Air Carolina in the future.

Matthews said she loved hearing some of the history behind Frog Hollow. She took a keen interest in the site and drove here a couple of days early to snap photographs and scout out potential sites for painting.

It was difficult to pass on a scene that included the rustic boathouse.

“Especially for the land trust properties, you want to do something that reflects the land,” Matthews said.

30 years: From REMAS to Rowan EMS

The sirens go on with the flip of a switch, and Rowan EMS Battalion Chief Bill Hamrick accelerates the gas.... read more