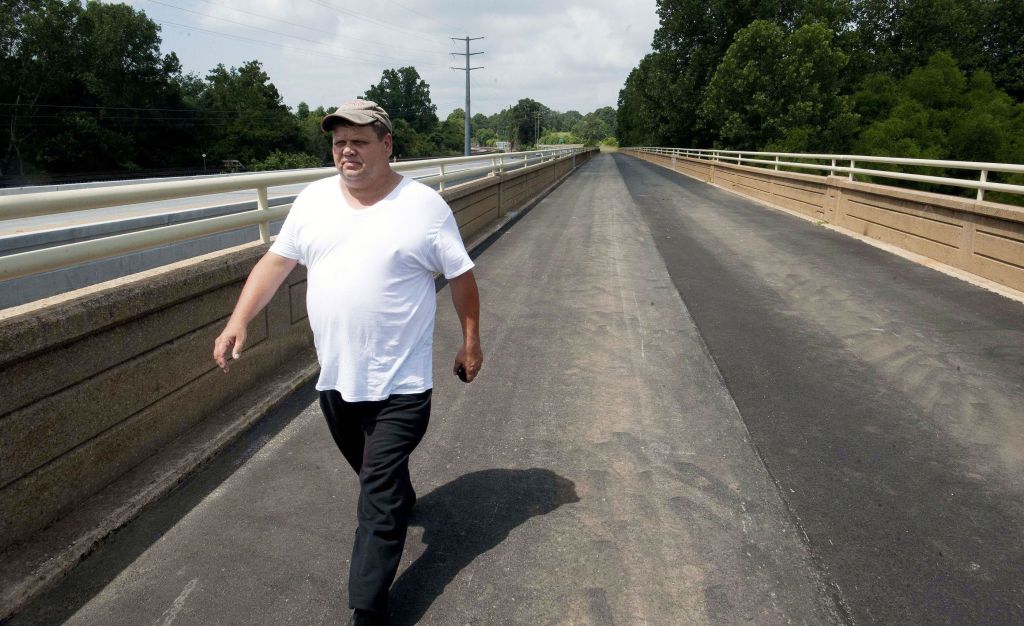 Al Elliott parked his car on the edge of fresh asphalt. Just beyond the hood of his Saturn, three red diamonds indicate that the road has come to an end. He makes his way across a patch of recently seeded ground that is in desperate need of rain. Looking southward, the walking man steps up and plants his foot down on history.

Underneath Elliott’s feet is the 90-year-old Wil-Cox Bridge that crosses over the Yadkin River, linking Davidson and Rowan counties. The seven arches that support the concrete structure have been a draw for painters and photographers for years, as the design opens a window into a different era in bridge construction.

The area around the bridge is rich in American history and is important to preservationists. Plans to demolish the bridge during the recent interstate highway improvements prompted an active discussion to find ways to preserve the outdated structure. Eventually Davidson County would end up taking responsibility for the bridge.

The N.C. Department of Transportation recently completed repairs and improvements to the bridge, and Wil-Cox appears to be on the cusp of a new life as a pedestrian bridge.

“The bridge was just sitting here waiting on someone to enjoy,” Elliott said.

At the suggestion of his doctor, the Lexington native took to pounding the pavement as the way to improve his heart and his health in general. Recently, Elliott has been making his way to the bridge five days a week to get in his 40-minute walk. Forty minutes equals eight trips back and forth across the Yadkin River.

Elliott’s health gets him outside to walk, but his ponderings bring his feet to the bridge. He walks. Carrying a mixture of memories of adventure and personal tragedy that coincide with his love of history and nature.

The first time Elliott recalls coming to the bridge was in 1974 when he was 14 years old. Elliott, his father and uncle launched a boat from nearby York Hill access and fished for catfish to well past midnight. Elliott recalls fish jumping out of the water all night long and witnessed freight trains passing above them on the nearby trestle. “To a kid it was wonderful.”

Two years later in 1976, Elliott’s older brother was killed in a single-car accident near the North Carolina Finishing Co. Rabon Elliott was the passenger in a friend’s 1966 Dodge heading toward Spencer on a wet Thursday night when the driver missed a slight curve in the road after clearing the end of the Wil-Cox Bridge. The car traveled 250 feet before striking a railroad crossing sign on the spur line that fed into the finishing company. Both Lexington teens lost their lives in the accident and brought Rowan County’s traffic deaths to 21 for that year.

The railroad crossing has long been removed and the old finishing company has been thoroughly dissected. The only thing that remains is the slight curvature in the road. On every other traverse of the bridge, the curve in the roadway comes into view, and Elliott ponders what his brother was thinking and doing in the minutes leading up to the accident.

“This is the last place my brother ever lived.”

On the return trips to the Davidson County side, the historic York Hill rises above the bridge. The tree-covered hill was named after the Gen. Zebulon York, who repelled a brigade of Union soldiers attached to Gen. George Stoneman’s troops in the waning days of the Civil War. Elliott points out that Daniel Boone lived nearby and includes him in the list of historical figures closely tied to the area.

A new handrail has been added to the sidewalls of the Wil-Cox bridge to bring up the height for safety. A small asphalt parking lot lined out for five cars is located on the Davidson County side near the now closed-off Old Salisbury Road, which has been renamed Plemmons Drive. After crossing the new U.S. 29 bridge into Davidson County, the road becomes Wilcox Way.

Just 10 years shy of its 100th year, the Wil-Cox Bridge has been repurposed for a life in the slow lane. The arches that underpin the bridge appear to spring across the Yadkin much like a skipping stone skimmed across the surface of the water. Overhead the Wil-Cox has helped Al Elliott lose 15 pounds and retain memories of his youth. The good and the bad. Speaking of the bridge Elliott adds, “It makes my heart pump daily, and I really enjoy that.”