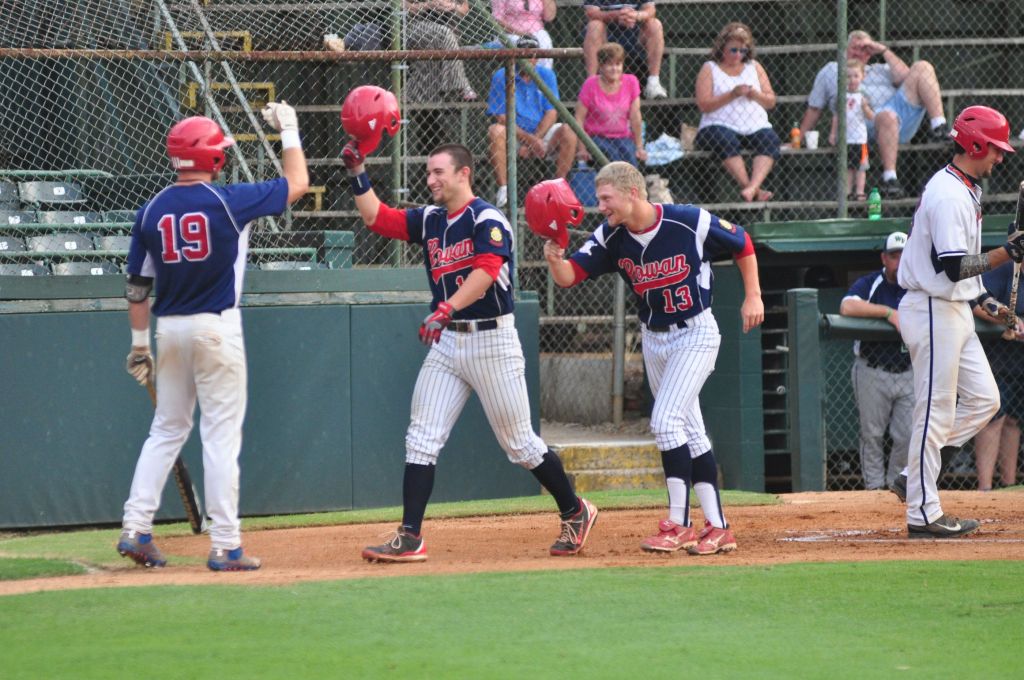 SALISBURY — As a rule, the Northern Division of Area III is a little older and a little more talented than their Southern Division counterparts, and nothing that happened on Saturday at Newman Park changed that way of thinking.
The Northern Division won the all-star game 8-3, shutting out the Southern Division the last seven innings with seven different hurlers.
“This game was kind of like the big leagues are now,” Rowan County coach Jim Gantt said. “It’s starter, than middleman, than bridge-guy, than set-up guy, then closer. You don’t get to see any one guy long, and it’s tough making adjustments.”
Rowan County is almost always the last Southern Division team standing, but Rowan has been beaten in Area III semifinals or finals by Kernersville and High Point teams from the North in each of the past four seasons.
This was the eighth time they’ve played an Area III All-Star Game. There was one tie. The only time the Southern Division has won the game was 8-5 last summer.
“Plain and simple, all those Northern Division guys are already going somewhere or they’ve committed to go somewhere,” said Rowan County’s Harrison Baucom, a rising senior at West Rowan. “They’ve got a lot of talent . They can hit it and they can throw it.”
Mike Lovelace was part of the Southern Division for many years when he coached Mocksville, but he’s now the gold-jersey wearing coach at Winston-Salem and enjoyed piloting the Northern Division team.
“I’ve got the best team I’ve been able to assemble at Winston-Salem so far,” Lovelace said. “We’ve got 16 guys. All are in college now or committed to go. There’s a whole lot of talent in the North. That division (the Northeast) that’s got High Point, Randolph and Burlington has three very strong teams. In our own division (the Northwest), there’s going to be a great first-round series between Kernersville and Davidson County, and I’m worried to death about own series with Western Forsyth.”
The Southern Division didn’t have some of its better arms available. Southern Rowan’s Colton Laws and Dillon Atwell, Rowan’s Connor Johnson and Stanly’s Russ Weiker batted but didn’t pitch.
Chance Bowden, Rowan County’s first baseman, made most of the noise for the home team. He crushed a two-run homer in the first inning off Winston-Salem lefty Jacob Craver after Baucom drew a walk.
“That ball was level with the lights when it went out of here,” Gantt said. “Chance hit the heck out of it.”
The Northern squad used three hits and two walks to score three runs in the second against Mocksville’s Colby Cranfill. The South tied it at 3-all in the bottom of the second on a throwing error that allowed Mooresville Legend Kane Sutton to score after an infield hit by Baucom.
Hunter Shepherd, a rising junior homeschooler, was on the mound for the Southern squad in the third.
Shepherd got two quick outs before Colson Everett, a Davidson County slugger who is headed to Pfeiffer, belted one over the left-field wall to put the Northern Division ahead 4-3. That lead held up the rest of the way.
“I threw a fastball low and in, but it leaked across the plate just a few inches and that made the difference on the home run,” Shepherd said. “That was kind of shocking, but it’s still just another baseball game. I put it behind me and got the next out.”
It stayed 4-3 a long time, as the North trotted out one power arm after another. Eastern Randolph’s Zack Burke was so dominant that fans rooting for the Southern Division were thrilled he was only pitching the third inning.
The biggest play came in the bottom of the fourth when Rowan County’s Michael Pinkston drilled a liner toward right field with the bases loaded. Second baseman Kyle Smith, who plays for Randolph County, made a leaping catch.
“It was a 4-3 game and it looked like they were going to score two runs for a 5-4 lead,” Lovelace said. “Huge play.”
The good news? Smith is coming to Catawba.
Pinkston shook his head.
“That’s kind of the way my summer has gone,” he said. “The hardest balls I’ve hit have gotten caught.”
Ty Andrus and Hank Niblock, two of Lovelace’s Winston-Salem guys, produced clutch hits as the Northern Divison pulled away late.
Rowan’s Luke Setzer doubled, while Rowan’s Chase Jarrett and Mocksville’s Michael Ball pitched scoreless innings. Southern Rowan’s Chase Labbe and Rowan’s Michael Caldwell made fine defensive plays, but it wasn’t enough.
“We lost, but it was still a great experience for all of us,” Shepherd summed up.