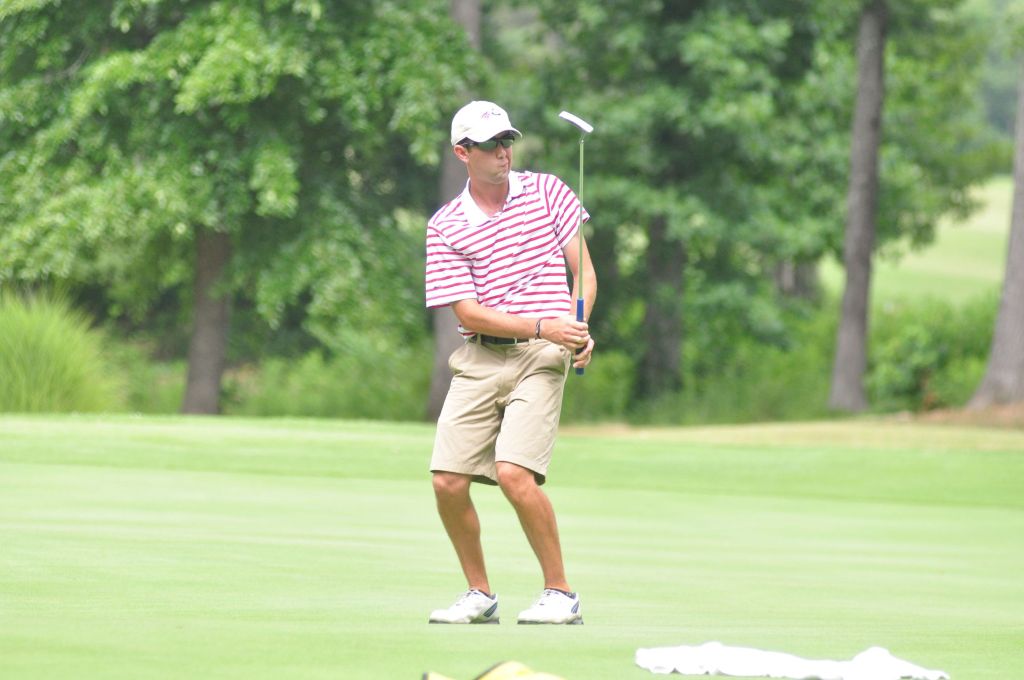 CHINA GROVE — The Rowan Masters let its guard down on Saturday and let some new blood rush in.
Three of the four semifinalists that face off Sunday morning weren’t there last year. Today at Warrior Golf Club, Matt Hardman, Brandon Phillips and Justin Lefler join Masters staple Keith Dorsett for the final day of action at 8 a.m. Hardman/Dorsett and Phillips/Lefler are the matchups with the winners advancing to the 12:30 p.m. final.
The left side of the bracket saw some upsets with Phillips, a 16 seed, and Lefler, a 29-year-old Cleveland resident, enduring the first two days.
“Nobody around here knows me so I was trying to make a name for myself,” Phillips said. “I was looking forward to playing.”
Phillips, who made the drive from Kannapolis, knocked out defending champion Phil Miller in the second round 3 & 2 and then beat Ken Clarke 4 & 3 in the quarterfinal.
Phillips said he had only played the Warrior a handful of times entering the weekend.
“I just had to maintain making pars,” Phillips said. “I felt pretty good about how I played. My short game was really good.”
Hardman, Catawba’s top player entering his senior year, knocked off Davidson’s Alex Nianouris in the second round and edged Chris Owen to reach Sunday. Hardman, who came from Gettysburg, Pa., to play in the event, led both matches the entire way.
“I was pretty pleased with how I hit the ball today,” said Hardman, the qualifying medalist with a 66. “The morning match against Alex was good and I was able to continue that solid play against Chris.”
Hardman won both matches 3 & 2. Against Owen, Hardman was up 1 through 11 holes and won 12 and 13 to go 3 up. He birdied 13 and 9.
“It should be really fun tomorrow,” said Hardman of today’s bout with Dorsett. “I got to watch him a little bit this afternoon and I can see why he’s won it so much.”
Seven-time Masters champ Dorsett outlasted blue-chipper Michael Childress in 19 holes after edging No. 3 seed Ryan Honeycutt 1 up. Dorsett birdied the 18th hole to force a playoff. He’ll go for his eighth crown in 12 years tomorrow.
“I like situations like that because I know what I need to do,” Dorsett said. “I knew I had to get there in three shots.”
The 14-year-old Childress was 2 up through five holes before Dorsett evened things up at the turn. After Dorsett hit a shot out of bounds, Childress won 12 and held the lead until the final regulation hole.
“We both made a few mental errors early on in the match,” Dorsett said. “We settled down after a while.”
Dorsett was seeded 19th after qualifying with a 76. He won Masters titles from 2005-2007 and 2010-2012.
“I got another young buck waiting for me tomorrow,” said Dorsett of Hardman. “I’ll have my work cut out for me.”
Justin Lefler, the No. 29 seed entering the tournament, won soundly against Andrew Morgan, last year’s Rowan Amateur champ, 7 & 6. Lefler is a Cleveland resident playing in the Masters for the third time and it’s his first time reaching the final day.
“I was slugging along just trying to make pars,” Lefler said. “It feels pretty good to make it. I just hope I can plug along tomorrow like I did today.”
•••
Complete results are on today’s scoreboard page.