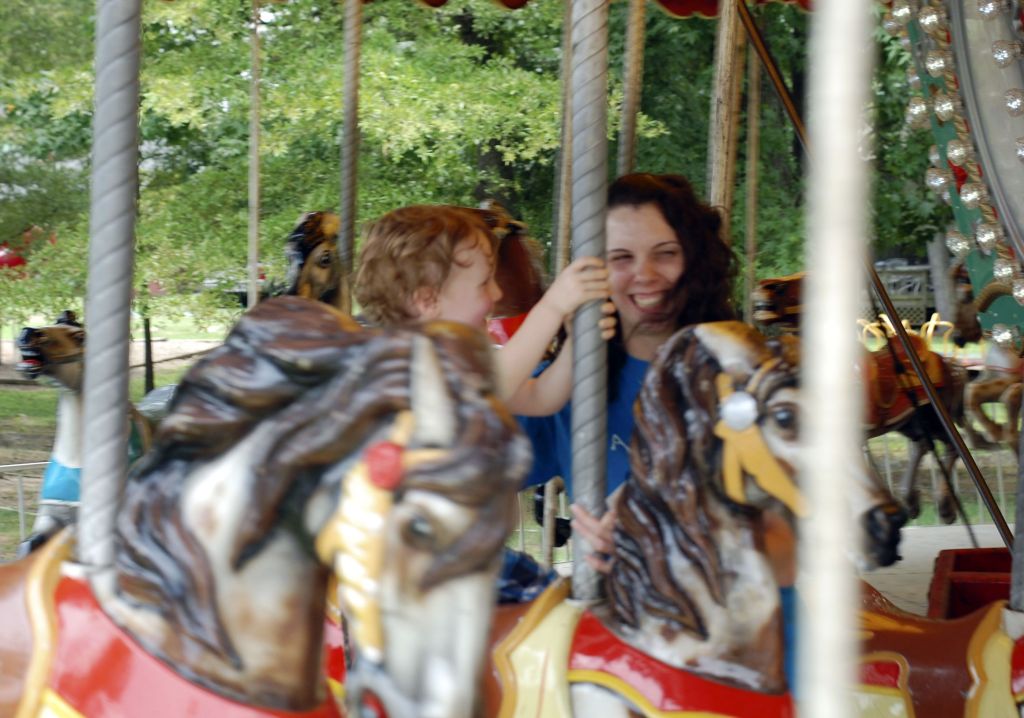 FAITH — While her 11-year-old grandson was off to conquer another ride, Daisy Bost found a shady spot under a tent and reminisced about summers when she was a young girl coming to the first Fourth of July celebrations in Faith, just after World War II.
Her Aunt Binky would make a barrel of slaw to go with the hot dogs, hamburgers and fried chicken — all of which ran out quickly as crowds for the Faith Fourth kept getting bigger.
“It has grown by leaps and bounds,” Bost said. “It started out to be a simple celebration of America, but it’s become quite a thing for us.”
Today Faith has one of the bigger Fourth of July celebrations in the state of North Carolina, and it’s not just a day, but a week of activities for this little eastern Rowan County town.
“I wouldn’t miss it for the world,” Bost said. “If someone gave me a trip to Hawaii, I’d say, ‘No, thanks, not during the Fourth of July.’”
Saturday saw plenty of kids take advantage of a 1-5 p.m. “matinee,” in which $20 armbands gave them run of the Faith Legion Park midway and all of its rides.
Concessions and games of chance also were available. Things shut down for an hour, then food booths, games and rides reopened at 6 p.m., as they will every night this week through Saturday (July 5).
Each night also features entertainment, and the popular Faith Idol competitions will be held at 8:30 p.m. Tuesday for kids 12 and under and 8:30 p.m. Wednesday for adults.
The big Fourth of July parade will take place at 10 a.m. Friday, Fireworks are scheduled for 10:30 p.m. Friday at the Faith Ballpark.
Pat Shook also had found some shade Saturday while her granddaughters, Madison and Ansley Deal, were enjoying the rides.
“It has a lot of great memories,” said Shook, thinking back into the 1960s when she was in elementary school.
She remembered trying to climb the greasy pole, which was lathered in Crisco, during the Fourth of July afternoon games. Shook said she made it only halfway up the pole toward the $20 bill on top before sliding down.
Living in Faith as a girl, Shook was able to go home, change clothes and return for the rest of the day and night.
The old-fashioned games still played on the Fourth include events such as the sack race, three-legged race, a watermelon-eating contest and an egg toss.
Every Fourth of July, Shook looks forward to a pineapple slushie-type drink sold at the park. But that’s not all.
“I enjoy seeing old friends,” she added. “This is where we usually meet.”
It seems as though every parent and grandparent you talk to in Faith Legion Park used to come to the Faith Fourth as children themselves.
It was true for Tamara Miller Albanese, who attended the matinee rides Saturday with husband Steve, daughter Brooklyn and Brooklyn’s friend, Kaylan Lowe.
The girls are rising fourth-graders at Salisbury Academy, and early on, they were hitting every ride in sight — such as the Bee Bop, Barrel of Fun and a mini roller coaster.
When she traveled to Faith as a child, Tamara said, she spent the whole day, starting with the parade, ending with the fireworks and participating in all the games in between.
Mackenize Whitley, who lives nearby, brought her 3-year-old son, Brock, to the matinee Saturday, but they were more interested in the games than the rides.
Whitley said she was waiting for Monday night, when the armband for rides will cost $12 with the donation of at least two cans of food for Rowan Helping Ministries.
Brock won a blow-up, red-white-and-blue gun at the “Fish Till You Win” tent.
Whitley said she’ll probably visit the park and midway every night this week. “I like the music, and the Faith Idol is always fun,” Whitley said. … “It’s free and fun, even if you just walk around.”
Even though her son, Jacoby, is only 3, he has probably been to the Faith Fourth activities every summer since he was born, Jennifer Blevins said after exiting the merry-go-round.
Blevins also came to Faith when she was young. Now she enjoys it through Jacoby’s eyes.
“I have fun watching him,” she said.
Back in her shady spot, Daisy Bost noted she has a big job connected to the Faith Fourth activities. She organizes the patriotic songs concert, which will be held at 5 p.m. today at Faith Baptist Church.
Some 23 local churches provide the 40-voice chorus. It used to be held outside in the park, but the weather could be so hot and unpredictable that moving it inside to Faith Baptist became a better idea, Bost said.
“It has truly grown into something,” she added.
So has the Fourth in Faith overall, thanks to Faith American Legion Post 327, the American Legion Auxiliary, Faith Civitans and Faith Jaycees.
“This is something people truly enjoy doing,” Bost said.
Contact Mark Wineka at 704-797-4263.