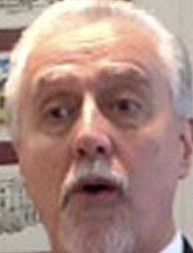 SALISBURY — Questions on education and taxation abounded as N.C. Rep. Carl Ford joined Rep. Harry Warren for a town hall meeting in Salisbury on Friday night.
Warren, who represents Rowan County’s 77th district in the General Assembly, asked Ford to join him at the monthly session.
Ford represents portions of Rowan and Cabarrus counties in district 76.
Much of the talk focused on the ongoing state budget process during the short legislative session, now in progress. Ford said the N.C. Senate will be in session today as conference committees continue to hammer out competing versions of the 2014­-15 state budget.
Warren brought with him copies of the competing versions of the budget proposed by Gov. Pat McCrory and the two houses of the General Assembly, which formed a large stack on a table at the front of the room.
“The whole purpose of the short session is to tweak the budget,” Warren said.
He gave an overview of the budget process and how the N.C. House appropriations committee — of which Ford is a member — handles the budget amendment process. After outcry from citizens and lobbying by representatives, Ford said, tax credits for historic preservation and movie filming in North Carolina were back on the table.
Following an audience member’s comment saying he hoped Ford and Warren would vote against the preservation tax credit, Ford said he believed that “it’ll be out or greatly reduced” in deliberations.
In all, Ford said, the Appropriations Committee considered 84 possible amendments to the budget, “most of which were voted down.”
Ford and Warren spoke against the N.C. Senate proposal that would have offered teachers an average 11 percent pay raise, but would have eliminated funds for teacher assistants and tenure for veteran teachers.
The state House budget proposal includes a 5 percent raise, with no impact on teacher tenure for those who currently have it.
“If you have tenure, you keep it,” Ford said. “We made a deal with you, we’re going to honor it.”
He said he does not support giving the same job protections to new teachers. Additional pay may be available for teachers who earn a master’s degree in the subject area they teach, Ford said.
“Teacher compensation is not a matter of if, it’s a matter of how and how much,” Warren said.
He said that within the next week to 10 days, the details of the conference committee’s compromise would be known.
Later in the session, an audience member asked for an update on the Common Core educational standards, which remain a divisive subject among parents and educators.
Ford said those policy changes are also being debated in a conference committee, and that he expects some changes to be made.
“What they didn’t want to do was go so far that we spend $400 million back to Washington,” Ford said — a reference to the Race to the Top grant North Carolina received from the federal government in 2010. Those funds, meant to improve classroom technology, teacher training and evaluation, were predicated on North Carolina’s adoption of Common Core standards.
Ford described sitting in a meeting and seeing textbooks with material that would be taught as part of the Common Core curriculum. “The stuff that I saw and heard in that meeting was appalling,” Ford said, although he didn’t elaborate.
Warren said he supports the N.C. House plan to create a new educational standards committee.
Warren said he hopes to learn this week whether there is support for overriding McCrory’s veto of House Bill 1069, which Warren had sponsored.
Tuesday’s veto was the third of McCrory’s term in office.
Among other changes, H.B. 1069 would require those receiving benefits to contact five potential employers per week instead of two, and would maintain a 12-­week minimum benefit period.
According to published reports, McCrory vetoed the bill because it would shorten the term in office for members of an unemployment review board appointed by McCrory — the members of which are paid $120,000 per year. Warren did not mention the salary issue, but said the bill would save North Carolina taxpayers money and help pay down debt owed to the federal government.
Warren also said reducing the cost to employers of unemployment insurance was key to attracting and retaining jobs.
Contact Hugh Fisher via the editor’s desk at 704­797­4244.