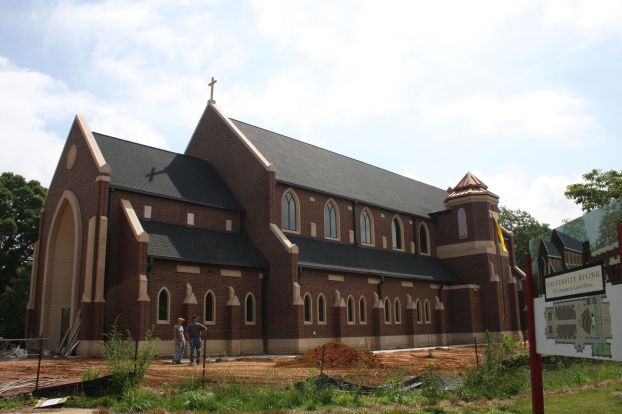 New chapel a place of grace at Lenoir-Rhyne

HICKORY — This fall, students at Lenoir-Rhyne University will have a spiritual place to call their own, as a new chapel opens in the very heart of campus.
“The chapel sits at the center of campus and will serve as a focal point, literally and figuratively, for campus life,” says the Rev. Rhodes Woolly, senior pastor of St. John’s Lutheran Church and a member of the university’s board of trustees. “These days, church-related colleges are moving farther and farther away from their religious heritage. Lenoir-Rhyne is unashamedly moving in the other direction.”
The opening of Grace Chapel is the culmination of a four-year process that the university undertook to create such a facility, according to the Rev. Dr. Robert Allen, L-R’s executive director of advancement relations, who spearheaded the project. The $4 million project is part of a $65 million capital campaign which includes a new science building at a cost of $25 million.
In the early days of Lenoir-Rhyne College, there was a chapel on campus. Over the years, St. Andrew’s Lutheran Church, situated across the street from campus, basically took the place of a chapel, Allen says.
Yet the university’s enrollment at just over 2,000 students has grown to a point that Lenoir-Rhyne’s trustees felt the campus merited its own worship space.
The chapel will serve to strengthen a campus that already has a rich spiritual life.
This past year, Allen was invited to a campus worship service in nearby Belk Center. There were some 139 students at the student-led service. “That made a powerful statement to me about how seriously students take their faith.”
The placement of the chapel, Allen explains, forms a new geographic center for the campus. Although there will be no Sunday services there, he says, “it is intended to be a spiritual resource for students and faculty and the community.”
Bishop Leonard Bolick concurs.
“Worship is at the center of our lives, and is central to our ministry that we all share at Lenoir-Rhyne,” says Bolick, leader of the N.C. Synod of the Evangelical Lutheran Church in America, based in Salisbury. “The beauty and architectural style and location of Grace Chapel will serve as a constant reminder of the importance of Christian faith to anyone who is on campus.”
“It’ll just give students a beautiful place to worship, a place that’s more symbolic of what L-R is all about,” says Carol Everhart of Spencer, a 1988 graduate of the university. “There has been no central place for students to gather and express their faith. I love the fact that the chapel is right in the center of campus.”
Traditional in design, the chapel will seat 400, and its furnishings will come from across the country – salvaged from churches in transition, Allen says. “Some wonderful pieces have been rescued.”
An 8-foot cross will hang above the freestanding altar, and a circular stained-glass window creates a focal point, high on the wall behind it.
A new pipe organ will be installed by C.B. Fisk, a company based in Gloucester, Mass. Last year, these same builders installed the Opus 143 instrument at St. Mark’s Lutheran Church in China Grove. The Lenoir-Rhyne organ is Opus 144.
Surrounding the chapel are some 26 stained-glass windows, all symbolizing the life of Christ. The windows are being created by Statesville Stained Glass.
Karl and Rosemary Kinard are giving one of those windows. Karl Kinard is a 1957 graduate of L-R and has served on its board.
“I knew it would mean so much to Karl,” says Rosemary Kinard, who worked at Catawba College for a number of years. “Catawba has such a beautiful chapel and L-R has not had its own chapel. It just seemed like a win-win situation.”
Both of Kinard’s children are also L-R graduates, and his daughter, Karol Kinard Kimmell of Atlanta, and her husband are also giving a window. The Kinards hope the two windows will be side by side.
Everhart’s parents, the Rev. Harvey and Susanne Blume of Hickory, have given the chapel’s baptismal font. Blume was a longtime pastor at St. Mark’s, and he and his wife are both L-R alumni.
“We are giving the font in honor of our family,” Susanne Blume says. Their three daughters and one son-in-law are all alumni. “We love L-R. We met and fell in love there, and graduated from there. Over the years, we have followed activities there because of our love of our alma mater. Living here makes it that much more special.”
She adds, “It will be meaningful for students to have a chapel they can go to any time, and for special events and concerts. It will be a wonderful addition to the religious life of the university.”
In mid-summer, a cadre of subcontractors fills the chapel. Sounds of saws, hammers and equipment beeps fill the soaring ceilings. Three weddings are already scheduled for the space, two in October and one in November, so there is a deadline to meet.
Dr. Wayne Powell, the university president, stops in often to check on progress.
“We consider this to be the congregation of the North Carolina Synod,” Powell says, “so this is the largest congregation in North Carolina. All people are welcome here.”
“It will be a very good thing,” says Quinn Scarvey, a 2014 graduate of L-R. “We have weekly chapel services each Wednesday. That will be a blessing to have the services in the new chapel.”
Emily Stirewalt agrees. She is a 1955 graduate.
“It’s a place to call our own,” Stirewalt says of the chapel. “This will be a place of our own to worship and be closer to God, a place to gather in good times and in bad.”
Freelance writer Susan Shinn lives in Salisbury.