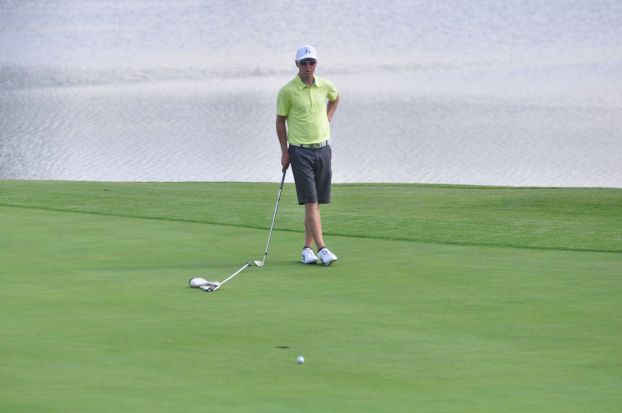 Miller part of 16 left at Masters

CHINA GROVE — Rowan Masters defending champion Phil Miller picked up where he left off from last year’s tournament at The Warrior Golf Club Friday afternoon.
Miller birdied his first three holes to play 3-under on the front 9 on another humid June day. The China Grove native also collected birdies on 10, 13 and 15 to finish 1-under on the back 9. Miller’s one of 16 remaining golfers alive as the field was trimmed from 32 on its first day.
“It just made the whole day really relaxed from my perspective,” Miller said. “It was a good all-around ball-striking day. If I could recognize anyone, it would be course Superintendent Mike Marsh for having the course in great shape.”
Miller, who finally won last year in his third trip to the finals, didn’t have to qualify for the Masters as the defending champ. He stayed sharp with a couple of primer rounds earlier in the week.
“I played a few rounds with friends after work,” Miller said. “I’ve played the course probably 500 times easy. The thing about golf is you never play an identical round. There’s never a same shot or angle.”
Miller will face Kannapolis resident Brandon Phillips today at 8 a.m. in the second round. Phillips topped Mike Mills 3 & 1 in the 16/17 matchup.
“I met Brandon today,” Miller said. “It was nice to be able to play with some guys outside of the county.”
The second round and quarterfinals will take place today with the quarterfinals coming in the afternoon. Sunday will feature the semifinals in the morning and the final begins around 12:30 p.m.
14-year-old Michael Childress, the youngest to ever qualify for the match play tournament, won 4 &2 against Jon Waller.
“It was more of not who had the lowest score, but who didn’t have the highest score,” Childress said. “I still need to prove myself out here.”
Childress, the No. 6 seed, qualified with a 71. The Sacred Heart Academy product faces Nate Jessup at 8:24 a.m.
The Masters, open to all amateurs this year, accepted several competitors from outside the county and Matt Hardman was one of them.
Hardman, Catawba’s top returning golfer and the No. 2 overall seed, cruised with a 8 & 7 win against Rick Rodgers. Hardman, who had the lowest qualifying score along with Ryan Honeycuttt with a 66, came from his hometown of Gettysburg, Pa. to play.
“[Course pro Brian Lee] has always done a lot for us since I’ve been at Catawba,” Hardman said. “I’ve always loved playing the golf course so I thought it’d be a fun tournament to come back and play.”
It was quite fun for the rising senior as he fired a 31 on the front 9, claiming birdies on holes 1, 4, 5 and 9.
“I was just firing on all cylinders,” Hardman said.
Seven-time Masters champ Keith Dorsett outlasted Bubba Hendren after 19 holes. Dorsett, who fell to Miller in last year’s final, is going for his eighth crown in 12 years. The South Rowan grad got a birdie on the playoff hole to win. Dorsett will face No. 3 seed Honeycutt today in the morning session.
Honeycutt, always a contender in county events, beat Jason Meadows 1 up.
Ken Clarke went to two playoff holes against Brad Vinson and advanced. Clark and Vinson pared the first playoff hole. Clarke reached par again to win.
“We both played really well,” Clarke said. “We each played 2-under through 18 holes. He birdied 1 and eagled 4. I pared the first 12 holes until finally getting a birdie on 13. It was just a good all-around match today.”
Clarke faces Richard Cobb, who edged Andy Lombard 2 & 1.
•••
Complete results are on today’s scoreboard page.