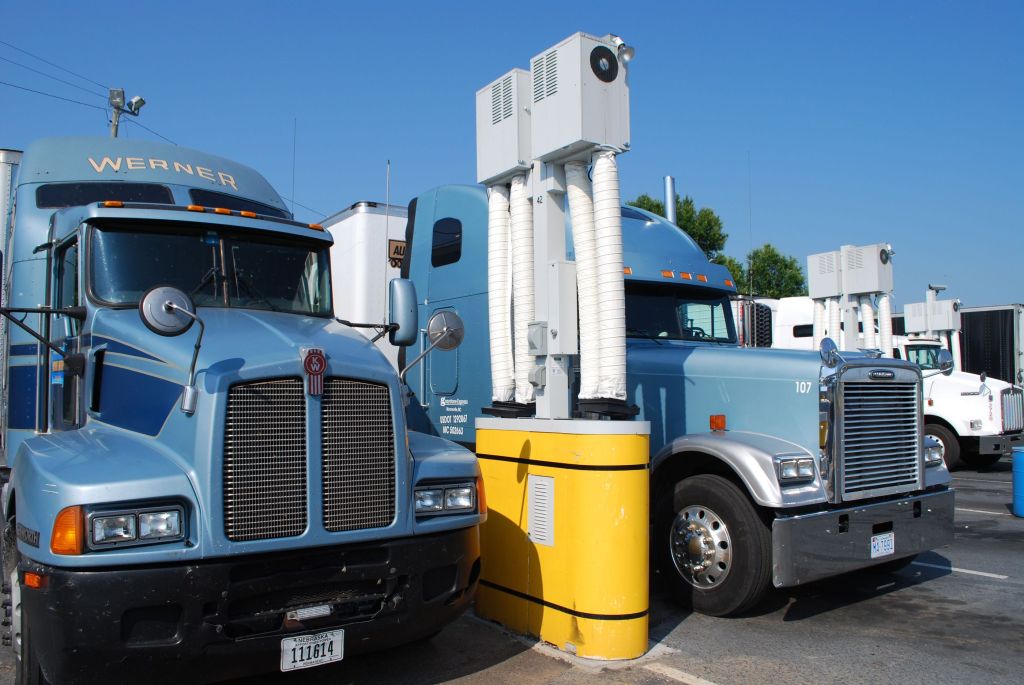 SALISBURY — Centralina Council of Governments is suing Love’s Travel Stops and three other companies to recoup $400,000 in taxpayer dollars that helped fund anti-idle equipment at the truck stop on Peeler Road, which was removed.
The $760,000 truck stop electrification equipment at the old Derrick’s Travel Plaza near Interstate 85 was supposed to improve the air quality in Rowan County by encouraging truck drivers to shut down their engines overnight and plug into an electric tower instead. Centralina Council of Governments landed a $400,000 federal grant to help pay for the project.
It was one of the largest air-quality improvement projects in Rowan and made up 60 percent of Congestion Mitigation for Air Quality funding for Rowan and Cabarrus counties in 2006.
Pomp and circumstance surrounded both the grant announcement in 2004 and the installation of the towers six years later.
Centralina Council of Governments, or CCOG, filed a lawsuit May 20 in Mecklenburg County District Court for $1.2 million in damages for the early removal of electrification towers in 2012.
The lawsuit seeks $400,000 in damages for breach of contract from CabAire LLC, the Delaware company that installed the equipment, and $800,000 in compensatory damages from Love’s Travel Stops & Country Stores Inc., Worsley Operating Company and Ri Cs5 LLC.
“We’re very concerned about making sure that taxpayers’ funds are properly invested, and when something like this happens, it’s our duty to attempt to recover those funds,” said Jim Prosser, executive director for CCOG.
CabAire removed the towers from Derrick’s on Nov. 6, 2012. Love’s bought the property 13 days later for $1.5 million, demolished the old Derrick’s and built a new truck stop, which opened this year.
In 2012, CabAire said Derrick’s owner Worsley forced CabAire to remove the towers just two years into the seven-year agreement.
In a letter to CCOG, CabAire said it was forced to remove the project — largely funded by public dollars — when Worsley sold to Love’s.
Love’s would not say whether it requested the removal of the towers, if Love’s was consulted about the equipment or whether any language in the sale documents addressed the towers.
The project launched in June 2010. CabAire entered into an agreement with CCOG to ensure that the equipment remained in place and was operational for seven years. Both CabAire and Worsley, the Derrick’s owner, were aware of this obligation, CCOG said Thursday in a news release.
Prior to filing the lawsuit, CCOG said it sought an alternative resolution before asking the courts to enforce the contract.
“We really aren’t accustomed to having contractors violate the terms of the agreement,” Prosser said. “We made every effort to resolve this.”
Prosser said CCOG asked CabAire to “sit down and talk with us,” but efforts were unsuccessful.
The electrification towers were paid for through a $100,000 U.S. Environmental Protection Agency grant and $356,152 in federal Congestion Mitigation Air Quality funds from N.C. Department of Transportation. The CMAQ grant required that if the project was operational for less than three years, $400,000 be paid back.
The Derrick’s project was one of more than 80 truck stop electrification systems throughout the U.S.
Love’s spokeswoman Kyla Turner did not return a call from the Post Thursday. Generally, Love’s is not a fan of truck stop electrification.
Turner told the Post in 2013 that Love’s has towers at a handful of locations. She called truck stop electrification “an expensive system that is severely under-utilized” and said truck drivers sometimes complain about the towers.
Turner also said the towers take up a lot of space. That can create a problem because Love’s has a smaller footprint than other truck stops, offers between 70 and 90 parking spaces, compared to 250, Turner said.
Last year, CCOG said CabAire didn’t do enough to save the tower project.
Attorney Steven Meckler said CCOG was “concerned that we did not see that CabAire attempted to legally enjoin the travel center from removing the equipment or take other legal action to enforce the owner to adhere to the provisions of your lease agreement with it.”
CabAire did not notify CCOG about problems with the electrification project or the deteriorating relationship with Worsley before removing the equipment, Meckler said.
But CabAire said Worsley did not promote the use of the new equipment, did not maintain easy access to the towers and did not keep the installation secure and free from vandalism.
The fourth defendant in the lawsuit, Ri Cs5, owned the truck stop property when the towers were installed. It executed the deed to Love’s Travel Stops and had the lease with Worsley to operate Derrick’s.