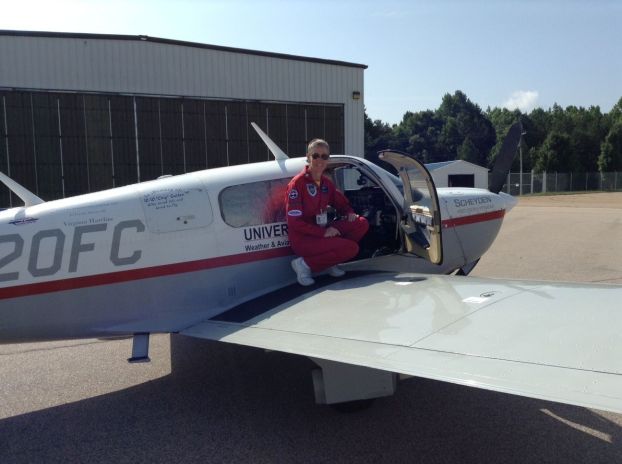 Live life, learn and share.
That was the message of keynote speaker Carol Ann Garrett when she spoke to the ASCEND camp at the Rowan County Airport on Wednesday morning. Garrett has flown three times around the world, twice alone. The accomplished pilot and motivational speaker told of her travels to a group that included 19 students, their instructors and several parents and other interested attendees.
ASCEND — or Aviation Summer Camp Exploring New Dimensions — is open to 13-18 year olds each summer. The camp meets Monday through Friday from 9 a.m. to 3 p.m., and campers get actual flying time on Saturday. It’s hosted by the Experimental Aircraft Association, or EAA.
Those who apply for the camp have to complete an application and write an essay on why they want to attend, said Jana Brown, an elementary school teacher and one of the original organizers.
“We need to bring youth into aviation. The Young Eagles and the EAA help us to do this, and the airport staff has been super. They help us in every way they can,” she said. Brown also thanked individual sponsors for keeping the ASCEND camp going and said it will need more next year.
The Experimental Aircraft Association Young Eagles program gives young people ages 8-17 the opportunity to go flying in a general aviation airplane. These flights are offered free of charge and are made possible through the generosity of EAA member volunteers. Flights on Saturday will last about 20 minutes and will be the first steps in the Young Eagles program. Also offered are the Sporty’s Learn to Fly Course, a first flight lesson and EAA scholarships.
A busy curriculum, developed by Brown and Tammy Koontz, encompasses all aspects of aviation. On Wednesday morning, students had instruction on instruments and flight planning. Other topics during the week included riveting, wing covering, weather, flight controls and much more. On Thursday, the students took a field trip to the Greensboro airport in the morning and then had an aerobatic demonstration in the afternoon.
New this year is a career fair that will include representatives from various aviation employers today. Embry Riddle College and Guilford Technical Community College will have information on aviation higher education.
Representatives from the Rowan County Airport will also explain the operation details of the airport. Several pilots who built their own planes also plan to attend.
“This is the largest camp that we have had,” Brown said. “You don’t have to want to be a pilot to be here. We have quite a bit of interest in aviation maintenance. Many have returned for more than one camp and this year there are eight interns helping us to keep things running smoothly.”
One of those interns is 19-year-old Zahra Khan of China Grove, back for her fourth year of camp.
“I had never been introduced to aviation. It is harder for those who do not have family members already involved,” she said. “The camp has encouraged me to attend college at Embry Riddle in Daytona Beach, Fla., for mechanical engineering, which will help me to work in airplane design. Plus, I now have my own pilot’s license. I got it at age 17.”
Other interns echo the same thoughts.
“I want everyone to have as much fun as I do here,” Kiristan Waters of Concord said. “I am looking forward to getting my pilot’s license next year when I turn 17.”
Greensboro’s Jamie Helander called it “really great being a part of the aviation community. I want to help encourage other young people to do the same.”
Garrett, born and raised in England, gave her presentation on the specifics of the around-the-world flights and had students and adults mesmerized. She related the planning process of how she first decided to fly around the world in 2003 and that the flight took a little over seven months. That flight raised $80,000 for ALS, or Lou Gehrig’s Disease.
A world record attempt was next in 2008. She and another female pilot, Carol Foy, flew around the world in 8˝ days. Average speed was 115 miles per hour, almost doubling the previous best. The world record flight raised $300,000 for ALS.
Garrett took 11 months, April 2011 to March 2012, to make her most recent flight around the world. She raised more than $400,000 for ALS.
The first woman flew around the world in 1964, so it was a fairly modern record. Garrett talked about staying awake for up to 16 hours when flying alone and eating sugared candies to help in the final few hours. She expressed her love for Mooney airplanes and talked about the possibility of another epic flight in 2016.
Attending his first camp, Ezra Walls of Salisbury wanted to make sure that he got to speak to Garrett.
“I have always been interested in aviation. I am not sure which direction I will pursue yet, but right now I am thinking about medical helicopters or aviation mechanics,” he said. “This camp has highly experienced instructors, a wealth of knowledge and lots of hands-on. I am currently doing the online EAA youth members pilot training. There is lots of preparation for those tests.”
Walls expects the highlight of the week to be the actual flight on Saturday.
“These flights are the only time I have ever flown,” he said. “It is a really cool feeling.”