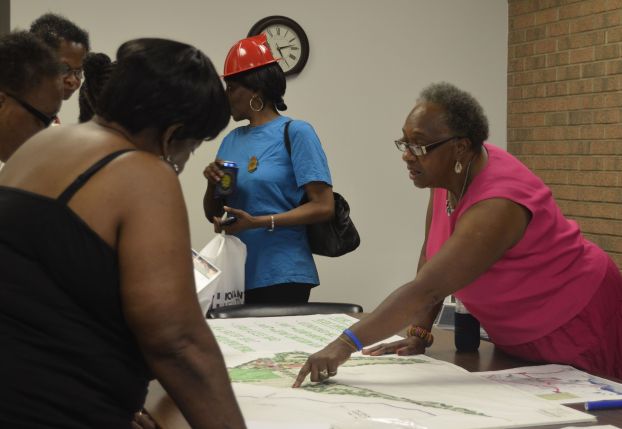 EAST SPENCER — Edith Heiligh recently moved back to her hometown of East Spencer and says she’s concerned about what goes on in her neighborhood. She was among about 100 people who attended a first-ever town hall information fair Wednesday where residents could speak directly with the mayor, councilmen and department heads.
She found a poster inside her mailbox and decided to attend, she said.
Her biggest hope is that the town clean up the neighborhoods and “build East Spencer up,” Heiligh said.
Her hopes are exactly what the town board, administrative staff and department heads want as well.
Mayor Barbara Mallett said the expectation was that the fair would generate some community awareness.
“It’s more about getting feedback,” Mallett said. She added the event was also designed in stations so residents could go from table to table to meet public works officials, planning, fire, police and others they may not have ever met. The event was very informal, with town department heads, staff and council on hand to answer questions.
Mallett said town officials also want to know if residents are supportive of a health care facility being located in East Spencer.
“We just want to know, ‘what do you want?’ ” she said of residents.
Police Chief Baxter Michael wanted to introduce residents to some of the officers and gauge whether residents would be open to implementing a Neighborhood Watch program in their respective communities.
Residents also heard about the plans to rehabilitate Royal Giants Park, which has been in disrepair for some time. The town has already begun to make needed repairs at the park, including a new covered shelter that was recently erected.
Brint Polk, a former town employee, said he received a mailer about the event.
“It’s good to see somebody is taking an initiative to make a change,” he said.
He looks forward to the growth of the town and says “everything is constantly changing.”
The event let’s the public “know where the direction of the town is” and that “there are people here to answer their questions.”
Lisa Stevens said what concerns her are the vacant homes throughout the town, one of which is beside her house. She’s cautious in letting her grandson even play outside near the property for fear of snakes.
The town has been working for some time to rid East Spencer of the dilapidated structures. Many of those vacant homes have been removed and there are many more on a list to be removed, town staff have said.
Stevens believes the two-hour event was a “good thing” for the town to host.
Contact reporter Shavonne Potts at 704-797-4253.