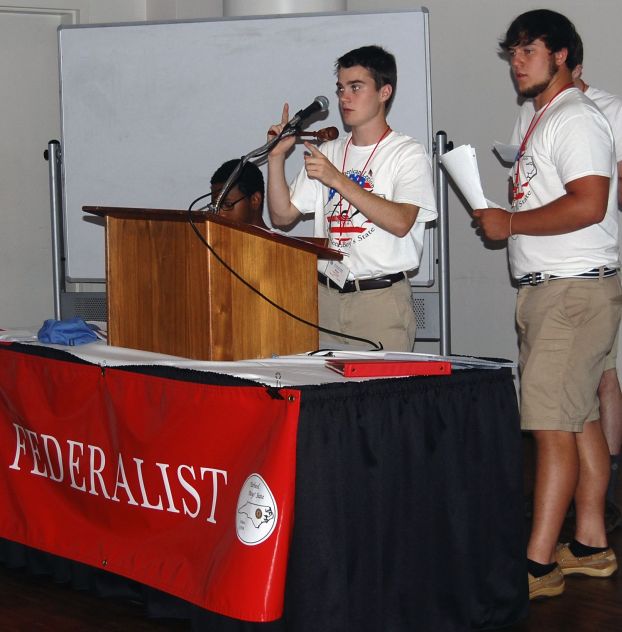 For the twelfth year, Tar Heel Boys State is being held in Rowan County.
This year also marks the 75th year of the program, and 260 rising juniors in high school convened Sunday on the campus of Catawba College.
This week they’ll establish nine cities, three counties and one state. They’ll form party platforms, elect officials, pass legislation and rule on cases.
“We bring boys from all over the state,” said Bob Price, who added that within the short span of a week, they send out a “cohesive group of young men.”
Price, a sergeant for the Rowan County Sheriff’s Office and a member of the American Legion, is volunteering for his third year at Boys State.
He said when he read a write-up about the program a few years ago, he was “intrigued” to see “something so positive for young men.”
“We focus on the inner workings of building the cities, building the counties and building the state,” said Christopher Byrd, program coordinator.
The boys created their cities, which are named after former North Carolina governors, Sunday evening. The cities are responsible for creating budgets, dealing with disasters and any other problems thrown at them by the Boys State leadership team, according to Byrd.
Later on in the week, the boys form their counties, which are made up of three cities. Counties must also form budgets and work with a local school board to regulate education.
On the state level, the boys must also create a budget that passes in both the House of Representatives and the Senate, as well as work with the cities and counties if emergency management funds are needed.
The boys are also divided into two political parties — the Federalists and the Nationalists. The boys meet in their parties and build party platforms to figure out what their party will stand for.
Some of the boys also partake in an afternoon judicial program. In order to qualify, though, they must take and pass a bar exam with “actual questions from the North Carolina Bar,” Byrd said.
These boys work on cases throughout the week and settle suits between Boys State attendees and staff.
“I got sued for taking a deck of cards one year,” Byrd said, adding that you can “get sued for anything.”
Byrd said he tries to challenge the boys with “problems similar to the real world.”
“We are a completely learn-by-doing program,” he said, adding that the boys are already learning politics, civics and history in school, but Boys State gives them an opportunity to learn about government in a hands-on environment.
“You actually get to create your own government,” said Caleb Johnson, a student at East Rowan High School.
“I’m really interested in politics,” he said, adding that he hopes to pursue a career in politics someday.
“One of my lifelong dreams is to become governor of North Carolina,” he said.
Johnson said he hopes to learn a lot about leadership and parliamentary procedure — skills that will be invaluable next year as he takes on the position of East Rowan’s Future Business Leaders of America’s president.
“I just want to make a change in this world — somewhere, somehow,” said Jarvis Miller, a North Rowan student, adding that he hopes to make that difference through an elected office someday.
“I’ve always been interested in politics and how the world works,” he said.
“These guys here are teaching us to be better politicians,” Miller said.
In addition to building their own government, Boys State participants will hear from speakers including members of the General Assembly, a Rowan County commissioner, a state Supreme Court justice and a United States representative.
The boys will also have the opportunity to participate in afternoon athletics, a college fair and variety show.