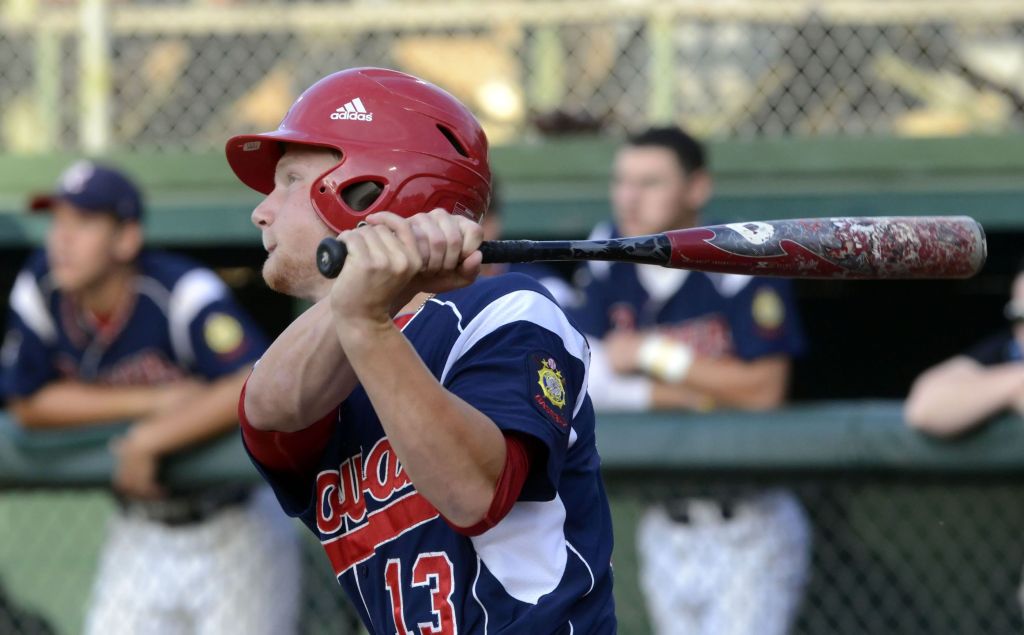 SALISBURY — Rowan County could have used some help Tuesday night.
But since Muhammad Ali wasn’t available to throw a knockout punch and Mariano Rivera wasn’t warming up in the Newman Park bullpen, RC was badly exposed in a 9-8 loss to visiting Concord.
“We just did not do it out of the bullpen,” coach Jim Gantt said after Rowan (15-5, 5-1) had its six-game winning streak snapped. “That’s what showed up tonight.”
Rowan coughed up leads of 4-0 and 6-2 in falling to Post 51 (8-10, 2-4). Concord tied the score 8-8 when Nick Coble slashed a two-run triple down the left-field line in the top of the ninth inning. Coble then scored the decisive run when teammate Jesse Klepper’s push bunt to the right side went for a one-out, RBI-single.
“They had just come up with two big runs in the eighth,” Coble said. “But that was a big bunt to win it. We all just rallied around each other late.”
Actually, they had to. Rowan flexed its early-summer muscle in the last of the first, when five consecutive batters delivered hits and RC scored four times against Concord starter Tyler Thomas. It began when Michael Caldwell’s one-out triple crashed high off the left-field wall. Singles by Chance Bowden, Riley Myers, Luke Setzer and Dustin Ritchie followed. Setzer gave Rowan a 4-0 lead when he raced home on Thomas’ third wild pitch of the inning.
“He wasn’t throwing a lot of first-pitch strikes,” said Myers. “You end up having to throw fastballs when you do that.”
Meanwhile Rowan starting pitcher Hunter Shepherd — while not spectacular — was efficient in a no-decision. He worked both sides of the plate, threw first-pitch strikes to 15 of the 20 batters he faced and exited with a 6-2 lead after five innings.
“We were gonna pitch him one more (inning), but it was the 3-4-5 hitters coming up,” said Gantt. “Coble’s a good hitter, a college guy and I didn’t want him to stand out after Hunter had done such a good job. It just didn’t work out.”
Concord initiated its comeback in the sixth against Cory Fries, the first of four Rowan relievers. Fries nearly wriggled out of a bases-loaded jam before Post 51’s Garrett Hurlocker lined a two-out, two-run single into center field, trimming the deficit to 6-4.
An inning later against lefty Heath Mitchem was victimized when Concord’s Chance Clark scored on a delayed-steal attempt at third base. Jesse Klepper’s bunt single tied the score 6-6.
“That’s a true nine-inning game for you,” winning coach Tommy Small exhaled afterward. “They get down four runs early and it’s nothing to them. They knew they had eight more innings.”
Rowan recaptured the lead in the seventh when Mitchem scored on a wild pitch and seemingly wrested the game’s momentum back into its hands in the eighth. Facing Coble — the eventual winning pitcher — Caldwell crossed on a strikeout/passed ball to Bowden to make it 8-6.
“Looking back, we definitely should have won that game,” Riley said. “We had 13 hits. We thought it was going to be over early.”
Instead, Concord scored three times against losing pitcher Setzer in the top of the ninth — the first two on Coble’s smash down the line and the game-winner on a 30-foot bunt.
“This game was do-or-die for them,” Gantt said. “They battled to the end. We had our chances to win it but couldn’t put them away.”
•

NOTES: Coble retired Rowan in order in the last of the ninth — including fanning Ryan Jones for the second out after falling behind 3-0. … Bowden singled his first three times at the plate and knocked in two runs. Myers and Setzer added two hits apiece. … Connor Johnson pitched an inning of hitless relief. He is Rowan’s scheduled Thursday starter at Concord. RC hosts Kannapolis tonight.