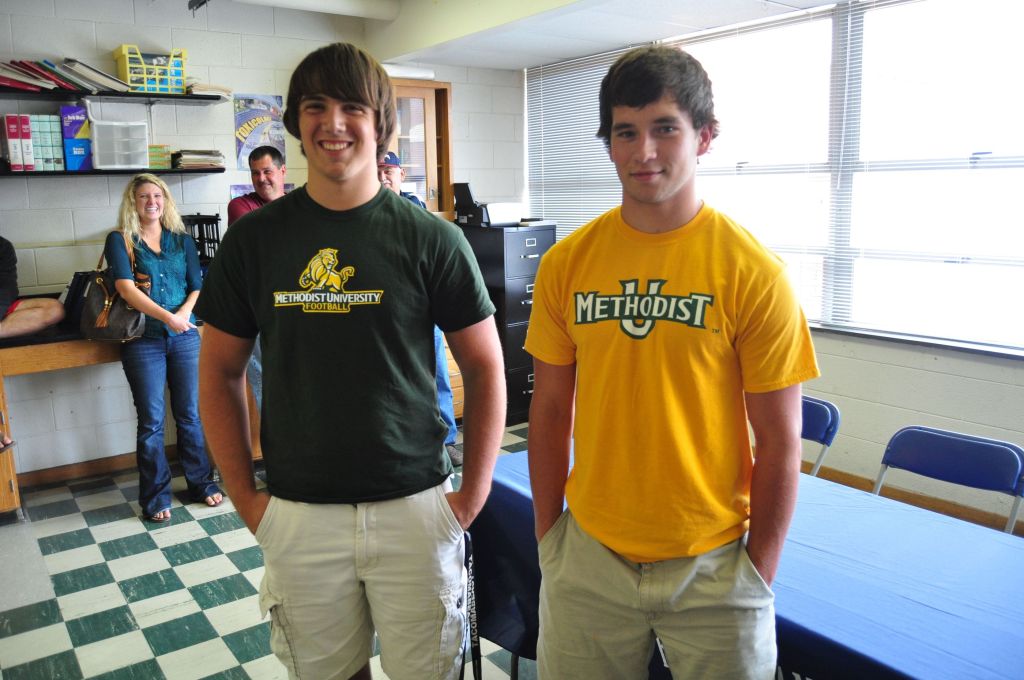 GRANITE QUARRY — Skyler Rabon carried a warrior’s spirit through the 2013 season.
The wins weren’t there, nor was the good health for the East Rowan offensive lineman. However, he bolsters an impressive physique and impressed Methodist coaches enough for them to promise him a shot on the team this fall.
Rabon joins Austin Hill, Bradley Newsome and Michael Collins as Mustangs making the trip to Fayetteville to play for the Division III Monarchs. Rabon says he and Newsome will be roommates.
“I’m excited to play at the next level,” Rabon said.
Rabon fought through a shoulder injury all year and has just gotten back to speed. He overextended himself while doing dumbbell crawls before the season.
“It was pretty rough, but I played through it,” Rabon said.
Still, the 6-foot-1, 225-pound bull of a Mustang played in every game. He didn’t know if college football was a possibility entering his senior year, but overcame the shoulder pain and was a presence for the Mustangs up front.
“Blocking was tough,” Rabon said. “Every pressure it felt like it was going to come out.”
Rabon was part of the 2012 East team that rebounded from a one-win season in 2011 to go 8-5 the next year, ending West Rowan’s 11-year county winning streak and reaching the third round of the state 3A playoffs. East lost that game in overtime, but Rabon will always remember it.
“Calvin [Edwards] was running through the left side and I made a big block and he scored,” Rabon said. “We helped get the East Rowan spirit back in the community.”
It makes sense Rabon played for the Mustangs. Coaches say he’s a horse.
“He’s unbelievably strong,” said East assistant Jason Barnes. “He just got back from a shoulder injury and is one of the strongest kids to come through here.”
Before shoulder surgery, Rabon said he was benching around 340 pounds.
“We’ve got a bunch of great coaches and they helped me get stronger,” Rabon said.
With his shoulder fully healed, Rabon believes he can challenge for playing time possibly at tight end.
“I think with my speed and a little bit of size, I can play tight end,” Rabon said.
Rabon played some tight end and caught a few passes as a freshman and sophomore. He’s played football since third grade.
MU went 8-2 last season, winning its final six games and eclipsing 40 points six times. The Monarchs won the USA South Conference, going 6-1 in the league. Quarterback Max Reber threw for 2,998 yards and 26 touchdowns last season while completing 65.9 percent of his passes.
Rabon gets good grades, wants to major in physical therapy, also likes to fish and work on his Toyota Tacoma.