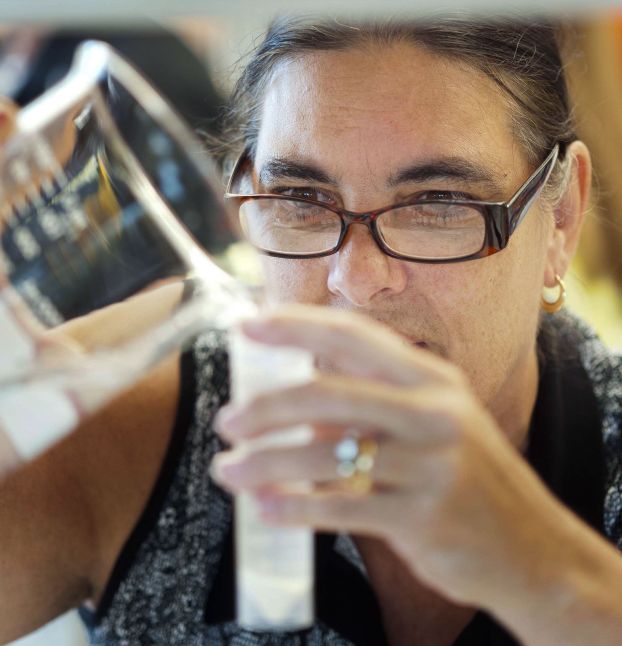 A dozen teachers from across the state visited Mickey Wilson’s lab for the opportunity to test an experiment to potentially take back to their classrooms.
Not only could the experiment be a fun, hands-on STEM activity, but it could also lead to the discovery of a new antibiotic. STEM stands for science, technology, engineering and math.
“It’s discovery science at its best,” Wilson said.
The teachers tested the Antimicrobial Mobile Discovery Kit developed at the Research Campus.
“We’ve developed a kit that anyone can use,” Wilson said.
Each kit, which costs only a dollar, contains a large tube with gel powder, a small tube, a 24-well assay plate and a graduated pipet.
The teachers planted samples into small pieces, putting them in different wells, and then covering them with a gel solution made from the powder in the larger tube.
Then, they filled the smaller tube with saliva and water, then piped that mixture on top of the gel.
“Spit is the bacteria,” Wilson said. “You use the bacteria from your mouth because everyone has it.”
After 24 to 48 hours, bacteria should begin growing on the gel from the saliva and water mixture.
If the plant has antibacterial properties, fewer or no colonies of bacteria will grow on the gel.
After the experiment is completed, students are encouraged to share their results via social media, or email them to the Research Campus, where they’ll be collected to “build a huge database,” Wilson explained.
He added that the hope is “to find a new antibiotic,” which is important because bacteria are becoming more and more resistant to antibiotics.
The kit allows students to get “involved in actual science,” Wilson said, explaining that their results “go beyond the classroom.”
He also said the kit would work on almost any grade level “depending on supervision.”
“I teach horticulture. I thought it would be a fun, neat way to bring something to my classroom,” said Buffy Everette, who teaches at the Northeast Regional School of Biotechnology and Agriscience.
“It’s very clear the way they have it set up,” she added.
Everette said she planned to use the experience to teach about biotechnology.
The group only accounted for a few of nearly 200 teachers who descended upon the Charlotte area for STEM Day — a day devoted to introducing teachers to different science, technology, engineering and math careers and activities. STEM Day is hosted by North Carolina New Schools.
Teachers and administrators were spread out amongst 13 companies in the region that employ individuals with STEM skills.
Some teachers also went to the Rowan-Cabarrus Community College Training Center to learn about the genetics of taste, recombinant DNA and how Rowan-Cabarrus graduates use their scientific training in their jobs at the Research Campus.
Other teachers attended seminars at Coca-Cola Consolidated, Cabarrus Health Alliance and Duke Energy’s McGuire Nuclear Station, among other locations across the Charlotte area.

From the Salisbury Post files, this picture — snapped by a photographer for Salisbury bookstore owner Theo Buerbaum — was... read more