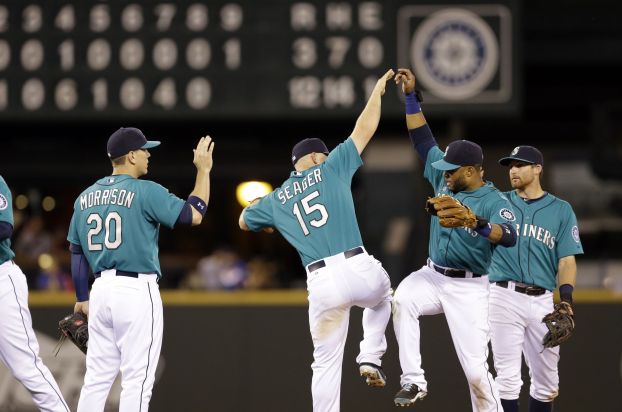 Plenty of run support for Felix; Seager has big night

SEATTLE (AP) — The run support Felix Hernandez deserved in his three previous starts finally arrived.
Logan Morrison hit two long home runs, Hernandez threw seven strong innings to win for the first time since June 2 and the Seattle Mariners used a six-run fourth inning to rout the Boston Red Sox 12-3 on Monday night.
Seattle won its fourth straight after a weekend sweep in Kansas City. The Mariners finally provided Hernandez (9-2) with some runs and battered right-hander John Lackey (8-5) in his shortest outing since September 2011.
Seattle had scored one run total while Hernandez was on the mound in his previous three starts. Getting a dozen against the Red Sox was more than enough for Seattle’s ace.
“I was so happy. They came through. They were pretty good,” Hernandez said.
Hernandez set a club record with his eighth straight start pitching at least seven innings and allowing two earned runs or less. He struck out six, walked none and efficiently handed the Red Sox their fourth loss in five games. Hernandez’s only miscues were David Ortiz’s RBI single in the first and Mike Napoli’s solo homer in the fourth.
Morrison had the first multihomer game of his career. His solo shot in the second inning off Lackey pulled Seattle even and he added to the offensive outburst with a two-run homer in the seventh, a 421-foot drive to center field off reliever Chris Capuano. Morrison finished with four hits for the third time in his career and four RBIs.
Morrison felt he started to have better at bats last week against San Diego and carried over into the weekend series in Kansas City.
“Just feeling like I could stay behind the ball better, put better swings on better pitches,” Morrison said. “You stick to the process, stick to the process, keep grinding out at-bats and the next thing you know you look at the end of the year and have pretty good numbers. That’s what I hope happens this year.”
Seattle’s big fourth inning started with Robinson Cano’s double. Kyle Seager followed with an RBI single and Morrison was able to beat the Red Sox shift with a single into right field to put runners on the corners. Lackey was visibly miffed that Morrison’s grounder got through the defense and he followed by walking Mike Zunino to load the bases.
Dustin Ackley then had the at-bat that changed the game. Ackley made Lackey work for 13 pitches, eventually hitting a grounder to first. Napoli threw to second to get the second out but Lackey did not cover first base and the chance at an inning ending double play was missed. Seager scored and Lackey struggled with his composure. A wild pitch allowed Morrison to score and a walk to Brad Miller and Willie Bloomquist’s single loaded the bases.
With one swing, Chavez surpassed his RBI total for the season. Brock Holt was playing shallow and unable to chase down Chavez’s line drive, clearing the bases and giving Seattle a 7-2 lead.
“I was trying to put something in play the whole at-bat and score a run there. He was making pitches,” Ackley said. “There were maybe one or two, I could have handled but fouled off the rest. … Fortunately it went a long way and he tired out a little bit.
Lackey was done after 3 2-3 innings, snapping a string of 39 straight starts going at least five innings. He gave up seven hits and walked three. Lackey needed 36 pitches to get through three innings and threw 38 pitches in getting just two outs in the fourth.
“I wasn’t able to make a pitch to get out of there,” Lackey said. “It kind of starting to go downhill and I couldn’t stop it.”
NOTES: Hernandez allowed a homer for the first time since April 21 vs. Houston. … Lackey’s last start of less than five innings was May 14, 2013, vs. Tampa Bay when he went 4 1-3 innings. … Boston manager John Farrell said it’s possible injured OF Shane Victorino (hamstring) could rejoin the team this weekend in New York depending on his rehab starts this week.

ALBEMARLE — Even in the best of times, Rowan County’s American Legion team has historically had trouble winning at Don... read more