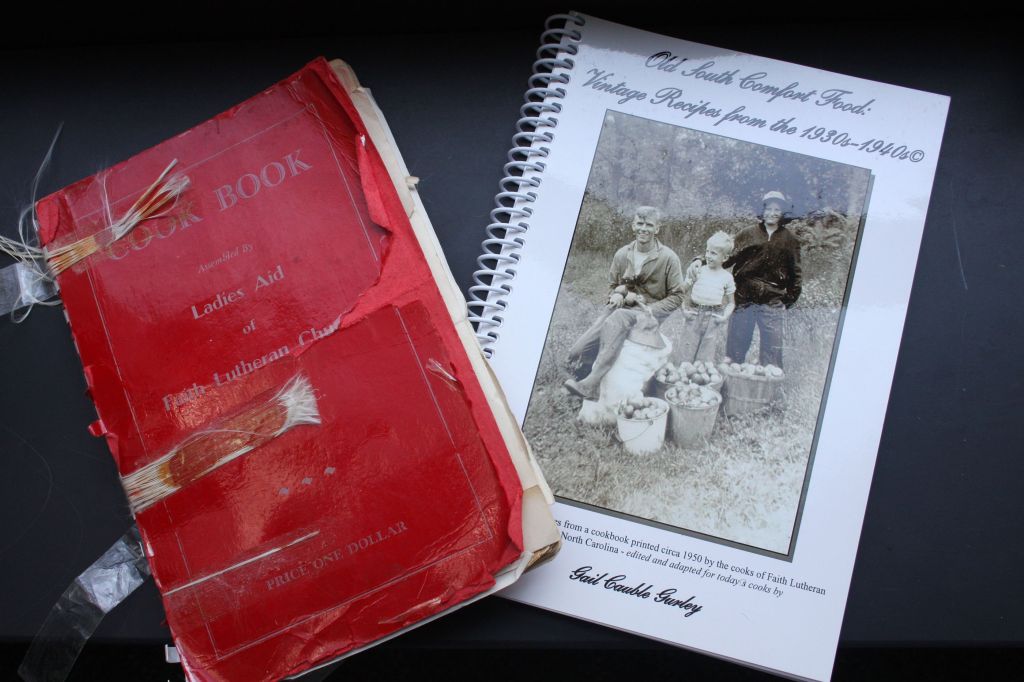 It took Gail Gurley six months to create a new cookbook from the red, tattered copy she treasured from a 1948 volume published by Faith Lutheran Church.
“It was not a chore, it was not a job, it was not hard to do,” says Gurley, the author of three fiction books. “It meant so much to me. It was just a blessing.”
Her book, “Old South Comfort Food: Vintage Recipes from the 1930s-1940s,” was published in 2010.
Not only did Gurley meticulously copy every recipe in the original cookbook — she added updated directions and recollections of many of the recipes. The 1948 cookbook was assembled by the church’s Ladies Aid group, now more commonly called a circle. Gurley was able to translate some of the directions and words no longer in wide use.
“This was their go-to source for cooking,” Gurley says of the women who put together this book.
When selecting a new cover, Gurley chose a photo of her uncle, Harold Lingle, with two cousins, Stewart Hall and Jerry Lingle. They were picking apples in Virginia, and Gurley liked how the photo looked on the cover.
The cookbook was featured in the February 2011 issue of Our State magazine. “It just thrilled me to death,” Gurley says. “I was really pleased with what they did.”
Gurley treasures her original cookbook, because her parents, the late Grayson and Vera Cauble, filled it with their own notes and recipes, as well as with recipes they clipped from the Salisbury Evening Post.
One of Gurley’s favorite recipes is her mother’s recipe for raisin cookies. “She used to make them every year after Thanksgiving,” Gurley says. “That was our signal that the holidays were there. She’d stack them in a large, metal tins with wax paper between the layers. They’d get stale, but we’d eat them. We didn’t care.”
Gurley also included her daddy’s recipe for scuppernong wine, misspelled words and all.
“With only a seventh-grade education,” Gurley says, “he struggled with the spelling but he wanted to leave these directions for posterity.”
Another recipe she treasures is a recipe for graham cracker crust pie from her aunt, the late Helen Williams Lingle. “It was famous all over the county,” Gurley says of the recipe. “At any church event, people would rush to get her pie, before we got our food, because it would be gone.”
Lingle told her the ingredients but not the amount. Her aunt didn’t own a measuring cup. “We laughed and laughed and had the best time trying to figure out the ingredients,” Gurley remembers. “It never turns out like hers, but it was close.”
Gurley also fondly remembers making mints with her mother and sister, Linda Mincey. “Mother had a big slab of marble,” Gurley explains. “My sister and I would pull the candy in big, long ropes, fold it over and pull it again. Mother put in the peppermint flavoring while we worked it. When it got to a certain texture, she’d cut it into small little squares or ‘pillows.’ ”
Unfortunately, the wind blew over her mother’s slab during a winter storm one year, and it broke right through the middle. Gurley’s mother was distraught. “Daddy found her another one,” Gurley writes, “but it never quite measured up to her original one. In making these dishes recorded in this cookbook, I can understand her frustration. They have never tasted quite the same as I remember.”
Still, she says, “It was such a joy doing this. It took me back to those days.”
Copies of Gail Gurley’s cookbooks, “Old Southern Comfort Food,” are available from the Web site www.scribesvalley.com, and locally at Carolina Lily.
Freelance writer Susan Shinn lives in Salisbury. This is the second installment of the Food for the Spirit series about church cookbooks. The Post is looking for new additions to the series. If your church has a new cookbook, or one with special historic significance, please contact the lifestyles department at lifestyle@salisburypost.com or call 704-797-4243.