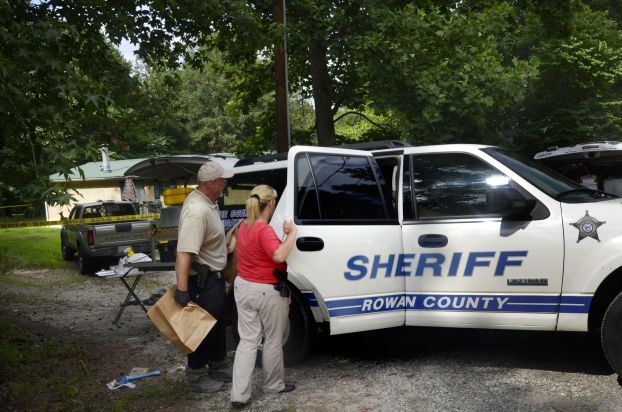 SALISBURY — Rowan County Sheriff’s officials are looking into a murder-suicide hours after discovering Kenny Smith Sr., 68, dead in the Pineview Circle home he shared with his son, Kenny Smith Jr.
Charlotte Police officers found Kenny Smith Jr. dead in a Charlotte motel room Tuesday evening. Rowan officials did not release further details.
His father’s body was found in his home hours earlier after family members were unable to contact him and alerted authorities.
On Tuesday about 10:30 a.m., after family members had repeatedly tried to call Smith Sr., sheriff’s officers went to the home at 104 Pineview Circle, just off Timber Ridge Road.
Investigators discovered the elder Smith dead inside his home. Officials determined he had been murdered and his financial card was missing, a sheriff’s press release said. It was the second Rowan County slaying within 24 hours, following a fatal shooting Monday night on East Lafayette Street. (See story below.)
Investigators said evidence and information gathered during the course of the investigation determined Kenny Smith Jr., 44, also known as Pee Wee. was believed to have left Salisbury headed for the Charlotte area. Arrest warrants were issued Tuesday afternoon charging him with felony robbery and murder. He was also added to the Sheriff’s Office’s Most Wanted list.
According to 911 communications traffic, Kenny Smith Jr. was found just before 8 p.m.
Kenny Smith Sr.’s body will be transported to the N.C. Medical Examiner’s Office for an autopsy.
Some of the neighbors who live closest to the home said they knew very little about the two men, who mostly kept to themselves.
One woman, who asked that she not be named, said she’s lived in the neighborhood over 20 years and Smith Sr. was living in the home before she moved there.
She told a Post reporter she didn’t know that much about him. She said she didn’t notice anything suspicious at the home earlier Tuesday.
The home is located on a mostly dirt road that ends in a cul-de-sac and contains nearly two dozen homes.