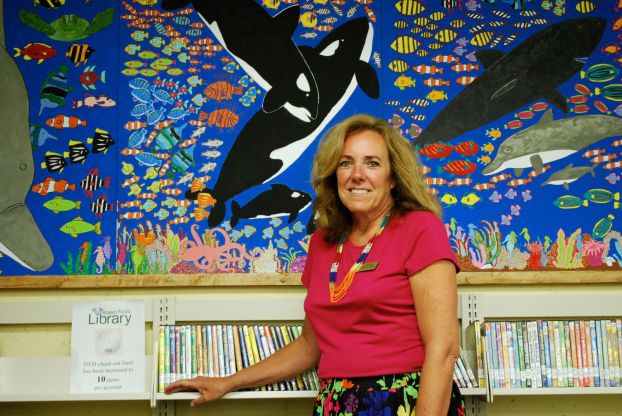 An ocean of learning

New mural brings seascape to East library branch
By Elizabeth Roy
For the Salisbury Post
ROCKWELL — Did you know that fish never stop growing? Or that an octopus has three hearts? These marine facts were just the surface of the discoveries that Library Associate Charlene Horne made while researching and painting the expansive acrylic mural that now hangs on the back wall of the children’s room at Rowan Public Library’s East Branch.
When Library Manager Marian Lytle came to Horne and asked her to paint a mural on the wall space where old, fading posters were hanging, Horne immediately thought of the ocean. “Ocean animals capture our attention,” said Horne. “Water is magical.”
Further inspiring Horne’s seaward creativity, the children’s room at the East Branch is “below the surface” in the basement of the building, and contains a large aquarium as well as ocean-themed paintings on the ends of the bookshelves.
“The kids go straight to the aquarium when they come to the library,” said Horne. “They always request books on sea creatures, and when they leave, the very last thing is to say goodbye to the fish.”
As of early June when the mural was hung, library visitors now have another aquatic scene to be transfixed by. At 3 1/2 by 21 1/2 feet, Horne’s mural contains a myriad of ocean creatures, from dolphins, sharks, seahorses and turtles to vibrant coral and plant life.
“Since the East Branch children’s room opened in 2008, we’ve always envisioned a mural on that wall,” said Erika Kosin, library services manager. “It is exciting to finally see it there.”
Horne began work on the mural in September and completed it in April, using spare moments in her work days at the library. “I always had a paint brush wet, ready to go,” said Horne. The frame for the mural was built by Dennis Yokley, maintenance manager for Rowan Public Library’s three branches.
Tammie Foster, associate at the East Branch, says that library patrons love the new mural. “It’s the first thing they notice. We’re very proud.”
Rowan Public Library’s East Branch, though smaller than the library headquarters, maintains a steady flow of readers. In May the branch had more than 4,000 visitors and circulated more than 7,000 books.
“We’re an active branch,” said Lynn Denison, branch manager. With summer reading underway — programs four days a week for children of all ages at the East Branch — Denison anticipates the activity will heighten quickly.
Since she began with the East Branch in 2006, Horne has run an “Art with Char” after-school art program for ages 4 through 11. Classes typically draw 12 to 14 children. Past projects have included Picasso portraits, Mona Lisas painted in everyday settings such a grocery store, and line drawings where young artists take their lines for a walk and let their imaginations wander.
“I have never been strict. Let your creativity go,” said Horne. “The creativity that flows from the children’s hands, it’s amazing.”
As of May, Horne began working at Rowan Public Library’s South Rowan Regional Branch in China Grove. She plans to start her art program at the South Branch with the coming school year.
Horne encourages people to come to the library and to continuously expand their minds — to be like the fish that never stop growing. “Anything you want to learn, you can learn at the library.”
As to how many fish are in Horne’s vibrant ocean scape? “That’s the great mystery,” she said. “Come to the library and count the fish.”

Wildlife Enforcement Officer Kristine Koch doesn’t see herself as one of the guys. One of six female officers out of... read more