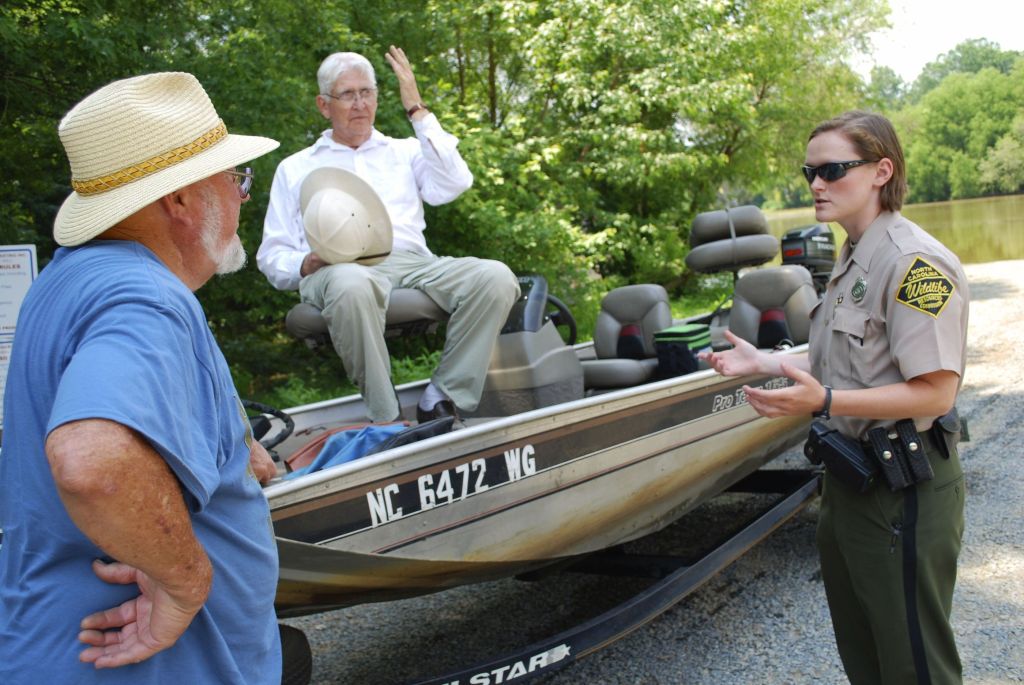 Wildlife Enforcement Officer Kristine Koch doesn’t see herself as one of the guys. One of six female officers out of 206 total at the N.C. Wildlife Resources Commission, Koch and other female officers are responsible for pulling the same weight as their male peers. But as a woman, Koch says she brings unique and helpful assets to the table.
“Females are different from males,” said Koch. “We’re the talkers. We can sometimes defuse the situation faster than males.”
While a female law enforcer’s ability to defuse situations has been proven to lead to fewer physical altercations than male officers in those same situations, there are other benefits to bringing more qualified females to the wildlife enforcement officer role. A prime example: More women are hunting now than ever. From 2007 to 2011 North Carolina hunting licenses sold to women increased from 12,994 to 17,058.
“In general, the population is hunting less,” said Michael Nye, hunter education specialist for District 6, which included Rowan County. “Our next generation of hunters is our female population.”
Nye is increasingly teaching women’s-only wildlife education classes. She says that women are often more comfortable learning from other women and respond very well to female officers presenting at classes.
“Female officers bring a different skill set to the table,” said Nye. “Not only are they competent, but they can relate to the female audience that hasn’t been able to relate in the past.”
Having hired its first female wildlife enforcement officer in 1989, the Wildlife Resources Commission recognizes the benefits of a diverse group of officers. That said, the commission cannot set quotas for females or minorities on their hires. “We’re looking for the best. We can’t put a number on the demographic backgrounds. We do it fair,” said Capt. Mitchell Little, training director.
The Wildlife Resources Commission takes in new recruits every two years and receives about 2,000 applications for just 20 academy spots. “It’s very competitive,” said Little.
As more qualified and motivated women join the agency, women are increasingly likely to attain leadership positions. “As female officers progress in their years of service … they will have the same opportunity as their male counterparts to be promoted,” said Sgt. Anthony Sharum. The agency currently has one female supervisor in the Law Enforcement Division.
Being a female wildlife enforcement officer comes with its challenges. “The biggest challenge is society adapting to females taking on the roles of a predominantly male field,” said Officer Hannah Shively. “But I like a good challenge, so it’s another perk of this career.”
The physical rigors pose another challenge. Koch, a Senior Airman with the Air National Guard currently applying for officer’s status, found the Wildlife Resource Commission’s physical training to be more intense than that of the U.S. Air Force. “It was no joke,” Koch said. Included in the rigors of state agency’s training were: hand-to-hand combat training, the moving of a 150-pound dummy a set distance, and being shocked with a stun gun to the point of full-body incapacitation.
“You’ve got to prove yourself as a female,” said Koch, who in the Air Force witnessed primarily male units griping about female officers slowing the group down. “I don’t want guys thinking of me like that, so I try to carry my own weight.”
Both Koch and Shively find powerful motivation in their positions as female officers, a responsibility to excel beyond the role’s requirements. “I want to represent the female population exceptionally well … to encourage other females that have a passion for this career to fulfill their goals,” said Shively.
Along with being open to all qualified candidates, the Wildlife Resources Commission is “changing with the times,” said Koch, updating old policies, taking extra measures to support the officers’ well beings, and issuing new equipment. The mentality is shifting as well, towards educating the public over writing citations.
Male or female, wildlife enforcement officers are required to have a very specific skill set. “It takes a certain type of person to do this job,” said Koch. “You have to have patience.”
Unlike many types of law enforcers, wildlife officers are often dealing with armed individuals in remote settings with little to no back-up. Situations range from hunting, fishing, and boating violations to drug use and criminal activity. “You never know what you’re going to find,” said Koch. “In the woods you have to know where your cover is — something that will stop a bullet from coming through.”
In one such situation, Koch observed a hunter killing a turkey lured in by baiting, a hunting violation. Though Koch introduced herself clearly, the man spooked and started walking towards her with his shotgun. “If they have a gun and you scare them, they might turn around and shoot,” said Koch.
Koch’s very first office looked a lot like the expansive outdoor one she works from now. At 8 years old she was a bird girl, throwing bumpers for bird dogs to retrieve in field trials. Both of her parents are ex-military — her father serving four years in the Navy and her mother serving 12 years between the Army and Navy combined — and wilderness adventure role models.
“My mom hunts twice a day and once at night during deer season,” said Koch. “We do downhill biking together. She rebuilds cars and trains bird dogs. I was always raised that way.” When 24-year-old Koch isn’t on duty or serving weekends for the Air National Guard, she and her 9-year-old black lab Keeper are often kayaking, hiking and mountain biking.
On duty, Koch brings appreciation of the outdoors to her interactions with the public. “I approach people friendly, ‘Hey, how ya doing, how’s the fishing?’ So I feel that their attitudes aren’t likely to be hostile towards me.”
As for proving herself to the public and her peers, Koch embraces the challenge. “It’s just that stereotype that it’s a man’s career field,” said Koch. “But that’s changing, slowly but surely.”