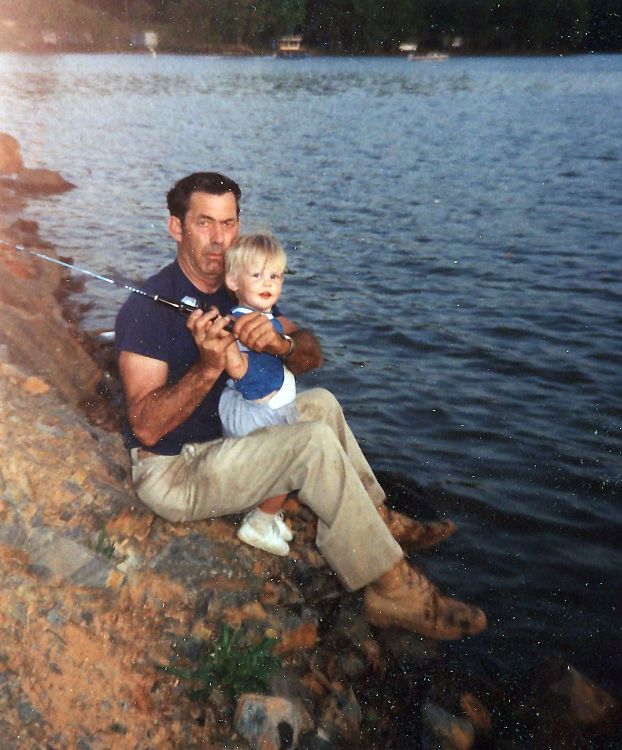 A life on the rocks delivers many lessons that can shape a family for generations. Navigating every step becomes a possible teachable moment. Cindy Poole remembers fondly her young life as a preteen spending many weekends with her parents and brothers on what was known in her family as “the rocks.”
In the late 1960s, Cindy would often find herself sitting alongside her parents, Buddy and Shirley Brown, and her brothers, Paul and Lonnie, on the rock-lined causeway that jutted out into High Rock Lake on Bringle Ferry Road. Armed with a mixture of fishing poles and different kinds of bait, the Browns would cast their wishes of large fishes into the waters and draw out memories and stories that would last a lifetime.
Cindy, whose family lived in Faith at the time, recalls with fondness that on many Fridays in the summer, her mother would be working hard to gather the items together for the trip down to the river. Eventually, Buddy would arrive home from his job as a local electrician and the family of five would pile into his vehicle with the supplies and head toward Bringle Ferry Road. The frequent trips were explained as an inexpensive way of spending family time together. Looking back, those years were an investment that built a family tied to the water.
Things were different in those days. The area near the rocks was somewhat undeveloped. There were few houses, and the local restaurant and marina had not been built. The road to the boat access point was still dirt. Sometimes the family trips to the rocks involved pitching a tent nearby for an overnight stay, which is not allowed anymore.
Most of the camp trips along the river for the Browns took place on the banks of Tuckertown reservoir below the High Rock Dam. Buddy would launch a small jon boat into the water and the kids and mom would crawl inside and spend all day trying to entice the bass, crappie and bream to join them for the outing. The small jon boat had one little haven near the bow where Cindy would crawl under to dodge the sun. If the task at hand was favorable, the family would enjoy their catch back at the campsite later. Banana sandwiches would serve as a provisional meal if the fish were tight-lipped during the day.
When not out on the water in the jon boat, the Browns would be found pitching their hooks ladened with worms or minnows into the lake. The trees along the banks of Tuckertown would sometimes get in the way of the kids’ cast and Buddy would step up to help free them. Paul remembers his dad tying on an artificial lure, known as a broken back minnow, in the hopes of picking up a bass that would be lurking just beneath the surface. The classic lure, which moves through the water with its tail wagging behind, is still a favorite for modern bass fishermen. This family routine would be repeated frequently during the child-raising season and beyond.
Within the last eight years, Buddy and Shirley have both passed away. Buddy’s obit included a list of things he enjoyed. Not surprisingly, first on that list was fishing, followed by hunting, working and then helping other people. The well-worn paths along the muddy banks of the river and the rock-covered seawall along the causeway have become more than well-worn memories that stick in the back of the minds of the children. They have become the waypoints to which they are anchored to each other and the love of the water.