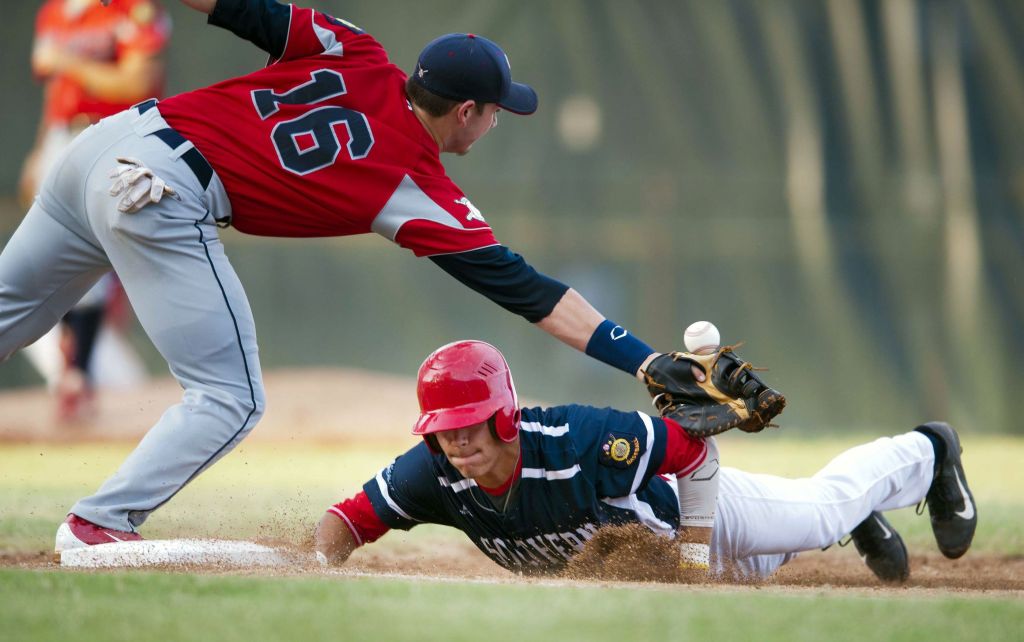 LANDIS — Rowan County improved to 2-0 in league play Saturday night, but getting there took some doing.
A bizarre, game-ending double play secured RC’s 8-6 victory at Southern Rowan — leaving both observers and participants scratching their heads.
“This was confusing to everybody,” said Rowan catcher Michael Pinkston.
It was. The game’s final play was more head-spinning than The Exorcist. Southern had two runners on base — Chase Labbe at second and John Daugherty at first — with one away in the last of the ninth inning.
Facing reliever Harrison Baucom, middle-schooler Owen White plunked a single in front of center-fielder Ryan Jones.
“Someone thought he may have caught it,” White said after collecting four of SR’s 14 hits. “But it either dropped in front of him or he missed it.”
The real fun started when Jones bobbled the ball. White alertly rounded first and motored to second, unaware that Southern coach Ben Hampton had held Labbe at third.
“We over-ran ourselves and messed ourselves up,” said Hampton. “We should have had bases loaded there with one out.”
Instead Southern had White parked at second base and two runners sharing third. Labbe make a break for home and thrown out at the plate by shortstop Jeremy Simpson. Seconds later Daugherty was ruled out for missing second base.
“They told us John missed second,” White said. “He says he went back and tagged up twice.”
It remains a mystery. What isn’t is that Rowan (13-4 overall) has won four straight games and sits atop the Southeast standings. Southern (3-9, 0-2) has lost six in a row and resides in the division cellar.
Winning pitcher Corey Fries relieved starter Connor Johnson was more sturdy than spectacular. He worked out of bases-loaded jams in the sixth and seventh innings and retired Colton Laws to lead off the ninth. But he faltered after yielding base hits to Labbe and Daugherty.
“Fries was awesome,” said Pinkston. “He was such a contrast to Connor and that messed a lot of people up.”
Rowan trailed 6-2 after Dillon Atwell sliced a runs-scoring double down the right field line in the Southern fifth. Jones and Pinkston delivered one-out, RBI-singles in the top of the sixth and when Jones hoisted a home run to left-center in the eighth RC was within 6-5.
“We battled all night,” said winning coach Jim Gantt. “It definitely wasn’t an easy game to win. We can talk about everything under the sun, but we were fortunate to win. We did not play well.”
They played well enough to score three times in the top of the ninth against SR fireman Ben Gragg. The last two crossed on Southern’s fourth error of the game.
That set the stage for a last-of-the-ninth that burned the brain. “It’s a tough loss,” White said afterward. “Very tough. We fought all game. We did a lot of things right. We just came up short.”