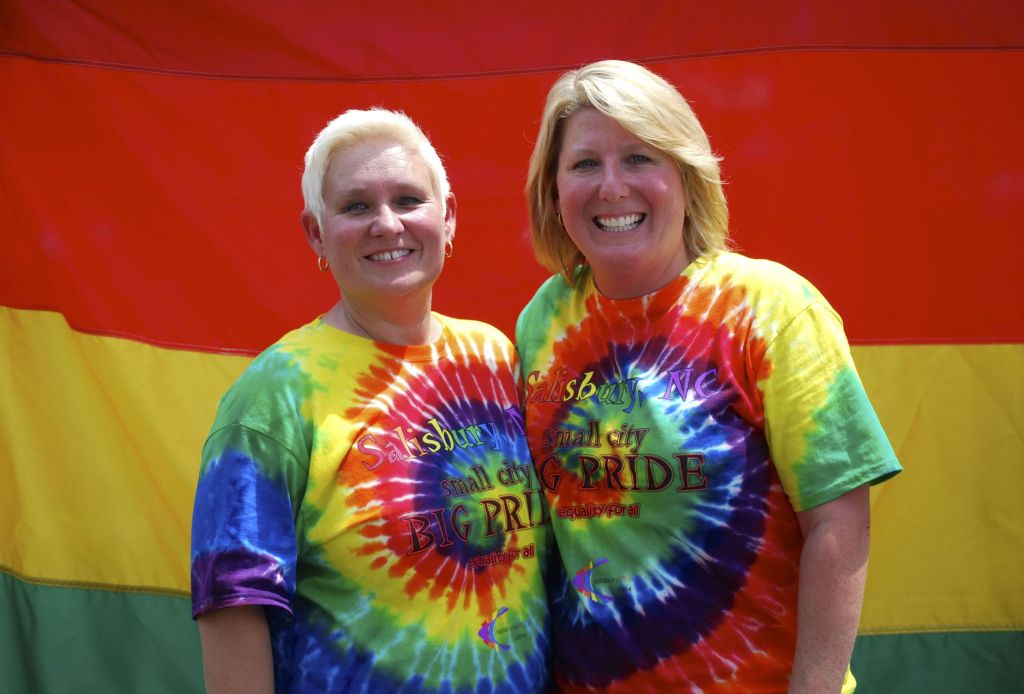 Saturday was a proud day for Tamara Sheffield and the estimated 4,000 people gathered on the block at Lee and Fisher streets for the fourth annual Salisbury Pride Festival. Created by the Salisbury Pride, Inc. organization, the festival brought together 70 vendors, over 20 performers, and 40 sponsors, and ran from late morning into the night.

“We’re proud to have an event for the entire community,” said Sheffield, president of Salisbury Pride, Inc. “It’s just ten people and a ton of volunteers who make this possible. It’s the effort of everybody.”

In past years, the Salisbury Pride Festival has drawn 2,000-3,000 people. This year drew many visitors from Charlotte, with others coming from as far as Morehead City and Georgia. “It’s grown a lot this year. We’re better organized, advertising more, and getting more vendors,” said Mona Borkowski, VP for Salisbury Pride, Inc.

Along with jamming to music and hearing speakers at the main stage, Pride visitors did everything from eat and drink to receive legal and spiritual guidance.

At the Campaign for Southern Equality’s booth, visitors could have Healthcare Power of Attorney documents drawn up and notarized for free — a value of roughly $250 per person, or an estimated $10,000 in free legal services over the course of the day. The documents protect partners’ rights to visitations and ensure that people’s healthcare wishes are respected.

“It’s really inspiring for me to be able to use my education to help people and to provide protections that the laws don’t yet provide,” said Liz Vennum, law student and legal intern at the Campaign for Southern Equality.

Several churches were among the festival vendors. “We were the only church at the first Salisbury Pride Festival,” said Carol Williams-Swoope, speaking for the United Church of Christ (UCC) in Concord. “It’s so great to see other churches here in support of love.” The UCC has been ordaining openly gay and lesbian people since 1972, and is actively working to overturn the North Carolina ban on same-sex marriage.

Also on the main stage, PFLAG’s (Parents, Families, Friends and Allies of Lesbians and Gays) six scholarship recipients for the year were recognized. “Over the past seven years we’ve awarded 22 scholarships for $1,000 each. That’s pretty awesome for a small PFLAG chapter,” said Mike Clawson, local PFLAG president. PFLAG has 300 chapters nationally and 20 North Carolina chapters.

Similar to past Salisbury Pride Festivals, Mayor Paul Woodson did not offer a proclamation for the day. That aside, organizers felt overwhelming support from the city, everything from issuing permits to providing a police force for the event. “This is a day to celebrate us, and the city of Salisbury has been wonderful in supporting that,” said Borkowski.

Pride Day is just one of the facets of the Salisbury Pride, Inc. organization. “We work all year long to promote education,” said Sheffield. Education efforts include monthly events such as socials, speakers, and fundraisers. Salisbury Pride, Inc. sponsored one of PFLAG’s scholarships, and is a key sponsor of Lee Street Theatre’s upcoming play, “Next Fall,” that premiers on July 17.

“We work to create a safe space, a fun environment, where everyone feels welcome and invited,” said Maryja Mee, volunteer coordinator for Salisbury Pride, Inc.

In recognition of the organization’s educational efforts and success in raising awareness and support of the LGBTQ community, Salisbury Pride, Inc. is the recipient of the HRC (Human Rights Campaign) 2014 Trailblazer Award. “That was a very proud moment,” said Sheffield. “When you’re trying to create a better world and you get recognized for it, it’s really nice.”

For a small city, Salisbury showed big pride on Saturday.

“I think every town might have this but nobody’s bothered to kick over the right rock,” said Sheffield. “Because people are the same everywhere.”