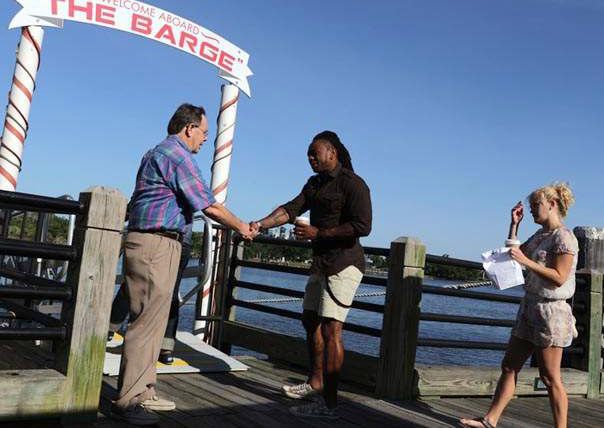 WILMINGTON (AP) — Some people attending the 9 a.m. church service at The Anchor know the words. Others mumble along to the beat of the music.
The sound of police sirens in the distance or the dog barking on a nearby balcony go unnoticed. Or, at the very least, unacknowledged.
On the bar counter one particular Sunday morning, Krispy Kreme doughnuts and fresh coffee sit where just the day before there was beer and wine.
But church members and those in Wilmington for the weekend are not concerned with the other uses of the space.
At this early hour, they just want to worship.
“That’s why we’re in the business that we are,” said Philip Chryst, pastor of The Anchor. “It’s not to try and convince people to come to The Anchor. It’s to impact people where they are.”
Chryst leads the community that operates without a home base. The “missional community” started in July with the goal of doing good in the community. Members meet weekly to study, pray and take part in service projects.
Having a service on The Barge next to a moored Henrietta III is the newest summer offering of The Anchor.
People at the service are there for a specific reason. Outside the hour-long service, The Barge is a space where visitors of downtown Wilmington can sip wine in the shade.
There are no markers of those sales visible during the service — though it is difficult to avoid the large banner out front inviting tourists in for a cold brew.
Chryst contacted Capt. Carl Marshburn, with Cape Fear Riverboats earlier this year to ask about using the dock. Marshburn, however, was steps ahead.
“Interestingly enough, he had spoken to pastors and thought there needed to be a Sunday morning service down on the riverfront,” Chryst said. “The seed was already planted, you could say.”
Swinging into an unconventional church setting and making it home is nothing new for Chryst and his followers.
Chryst said the community has bounced around for the past 11 months.
“We worshipped for six weeks in Hell’s Kitchen,” he said.
Worshippers were verses into “Blessed Be the Name of the Lord” when the electronic ticker listing the day’s hamburger specials would go off at the sports bar and restaurant on Princess Street, Chryst said.
The new meeting spot along the riverfront has a few distractions, but attendees welcomed the change of scenery last month.
“The service is pretty similar,” said Cari Ann Wells, of Raleigh. “The outside atmosphere is a lot different than our church.”
Wells and her husband, Travis, were in Wilmington for Memorial Day weekend when they heard about The Anchor’s service.
She said the informal service, with most attendees dressed nicely, but in a summery wardrobe of flip flops and linen, was welcoming to tourists such as herself.
“I think it’s good just for visitors out of town,” she said, adding she did not feel out of place like she might as a visitor to a brick-and-mortar church.
Lois Lebine from Maryland was walking on the riverfront when a homeless man told her about the service.
“I think it’s wonderful,” she said, wearing shorts, a T-shirt and a glittery baseball cap. “People don’t have to dress up. They can just drop in.”
Chryst said he anticipates Sunday’s attendance figures to change and for many people to be one-time visitors. He said between 20 and 40 people typically attend.
“Wilmington, just in general for church life, is hard to gather people for Sunday afternoons or evenings,” he said, acknowledging the call of the ocean wins out for many.
If the service is popular, repeat visitors will align themselves with The Anchor and will make a point to come back annually, Chryst said.
It is the beginning of a new business relationship for The Anchor and Marshburn.
Assuming the service continues, Chryst hopes it means better business for the Henrietta and Cape Fear Riverboats.
“I look at it like it’s a good thing because it’s good exposure,” he said.

SALISBURY — Weather can be tricky, creating many questions on disease and insects. Question: There is a large web with... read more