‘Nonpartisan’ mostly against Republicans in Raleigh 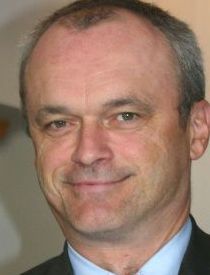 The director of N.C. Policy Watch paid a visit to Rowan County Public Library on Tuesday to speak with senior Democrats.
Well, seniors who are Democrats.
Although Chris Fitzsimon represents a nonpartisan group, his speech railing against Republicans’ track record in Raleigh seemed anything but.
In fact, Fitzsimon’s speech was dubbed, “The Disaster in Raleigh.”
Topics covered everything from education spending to voting rights to health care.
“We have legislative leaders who say, and they are going to be saying this all over the place, that they didn’t cut education or public schools,” Fitzsimon said. “Here are the facts from the North Carolina Budget and Tax Center. When you adjust for inflation, as every economist does, we spent $500 million less this current year on public schools in North Carolina than we spent before the Great Recession started.”
A teacher has to work 16 years to earn $40,000 a year, Fitzsimon said.
Many other teachers have to pick up second and third jobs to supplement their income and put food on the table for their children.
The average textbook costs between $35 and $85, digital or hard copy.
“The current budget for textbooks in public schools in North Carolina is $15 per student. Total,” Fitzsimon said. “We don’t have enough money in the textbook budget to buy one textbook per student.”
In 2011, the N.C. General Assembly enacted a tax credit for teachers who buy supplies for their classroom.
If a teacher buys a few hundred dollars worth of supplies, he or she could have taken a few dollars off their taxes, Fitzsimon said.
“Think about the message that sends,” Fitzsimon said. “Imagine going into IBM to get the job. They show you your office and say they don’t have a computer for you. They say, ‘Now, buy one of your own and you can take about $50 off your taxes.”
Last year, lawmakers repealed the tax credit for teachers.
The private voucher program referred to as “opportunity scholarships” takes money out of the public schools and gives it to “completely unaccountable” private and religious academies, Fitzsimon said.
Paramount Christian Academy, located in Davidson County, is eligible to receive the taxpayers’ money, Fitzsimon said.
“There are three students there. They meet in a little utility room attached to a woman’s house,” Fitzsimon said. “The textbooks she uses teach that dinosaurs and adults walked on the Earth at the same time, slaves were generally content and that gay people are fundamentally flawed.”
In these schools, Fitzsimon said, students don’t have to take tests and teachers are not required to have a high school diploma, much less a college degree.
“This coming year, our tax money is going to 2,400 kids to take to those schools, and it is going to keep increasing as we go along,” Fitzsimon said. “Public schools are under a huge attack.”
Fitzsimon said Americans for Prosperity, which he calls “Americans for the Prosperous,” are running ads completely distorting what the Affordable Care Act does.
“The projection in North Carolina was that 200,000 people would sign up for health care under the Affordable Care Act – 340,000 signed up,” Fitzsimon said. “More than 400,000 people now have health insurance that didn’t have it last year. It could be twice as many if we had just expanded Medicaid.”
Fitzsimon said the Affordable Care Act, although it has some problems that need to be fixed, is working and Americans have recognized decent health care is a fundamental right.
Fitzsimon spared no mercy for Republicans regarding tax cuts.
“If you make $1 million in North Carolina, you have roughly a $12,000-a-year tax break,” Fitzsimon said. “There’s another tax cut that goes into effect January 1. The taxes on corporations and the personal income tax rate will go down again slightly in North Carolina. That tax cut that is in place, unless they do something about it, will cost about the same amount of money as the House is trying to raise through the lottery.”
In their respective budgets, the Senate chose to kick people off Medicaid and fire teacher assistants while the House chose to encourage people to buy more lottery tickets, Fitzsimon said.
“Neither one of them thought it might be a good idea to put one more tax cut off just a little bit so millionaires didn’t get another big tax break,” Fitzsimon said.

Helping Organize People Effectively, or HOPE, is kicking off a unique, two-hour meeting at 6 p.m. Thursday at First Baptist Church in Lexington to cover specific changes to election law as well as voter identification requirements.
At the meeting, voters who do not have an acceptable ID or those needing a birth certificate will learn what they will need to do to obtain the free documents.
Local and state election officials, the Davidson County Register of Deeds and representatives from the N.C. Division of Motor Vehicles will be on hand to field questions.
As of Friday, more than 50 people have pledged to attend with the expectations to hear how the changes impact them and their families as well as what they will need to do to be able to vote in future elections.
“Our hope is to deal directly with the changes to the law by creating a venue where all North Carolina citizens can access information so they will be able to exercise their right to vote,” said Connie Russell, organizer of HOPE.
Over the past three years, HOPE officials say the organization has played a critical role in bringing the topic of voter engagement to the forefront.
The group also launched an ambitious Get Out the Vote campaign to ensure that all citizens had an opportunity to participate in the democratic process.
In this upcoming meeting, HOPE seeks not to target one particular race or party, but rather those who don’t have an ID.

N.C. Sen. Gene McLaurin, D-Richmond, said the House and Senate continue to be divided on the state budget.
The budget proposals have major differences, McLaurin said, including pay raises for teachers, teacher assistants, and state employees as well as how much money is reimbursed to hospitals and health care providers for providing treatment and services to the poor, disabled and elderly.
“The state budget process continues and there will inevitably be rumors floating around for the next few weeks until the Senate and House conferees negotiate a final budget that will come before us for a final vote,” McLaurin said. “Until there is a conference report, the details are kept in private behind closed doors. I support a more open and transparent way of conducting the people’s business, especially when we’re talking about a $21 billion budget that impacts the lives of every North Carolina citizen.”
McLaurin said news reports this week covering the state’s economic competitiveness under the current administration were “troubling.”
“Over 1,000 jobs are leaving Charlotte to locate just across the line in South Carolina. A major tire company expected to hire about 1,700 employees announced their plans to locate in South Carolina, choosing the Palmetto state over North Carolina,” McLaurin said. “I had a conversation this week with (N.C. Commerce) Secretary Sharon Decker about my concerns and relayed the need to make sure our rural communities are not left out of the process when competing for these good jobs.”