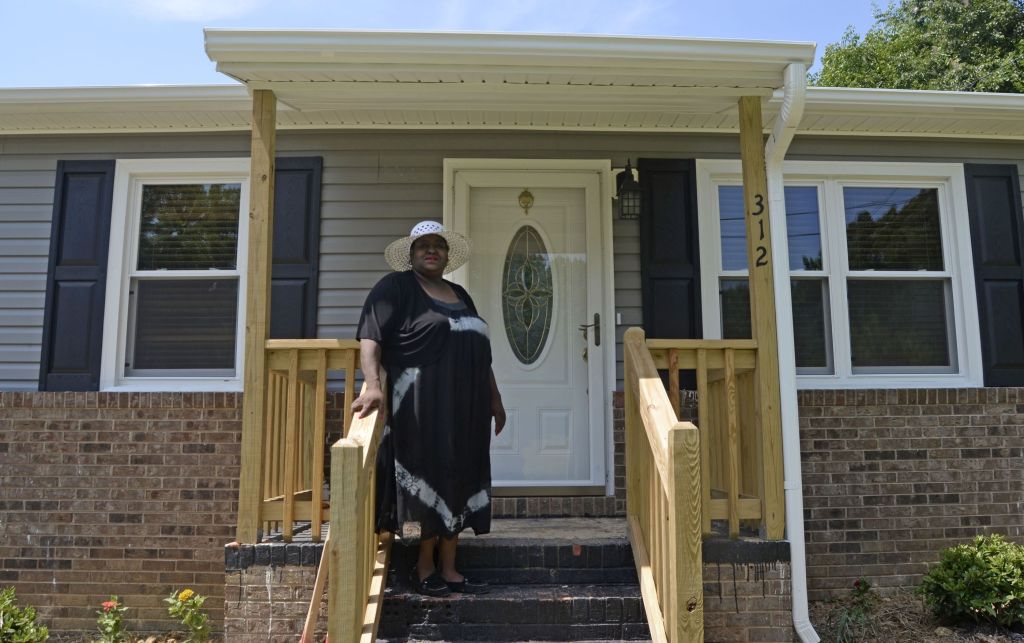 EAST SPENCER — Robbin Black has known the day would come when she couldn’t put off repairing her roof another year, but she never imagined the roof and other needed repairs around her home would be taken care of at no cost to her.
Black, who was born and raised in Rowan County, was one of the first recipients of a grant offered through the town to help low-to-moderate income families take care of repairs to their homes. The town acquired $500,000 from the NC Catalyst Grant and fixed nine homes. The grant, which required a $25,000 match from the town, is being offered through the state Department of Commerce.
“The goal and the purpose of the grant is to bring homes to code in the community,” said Alton Gaither, who is the project coordinator for Community Development Block grants.
The town turned to a grant to help them bring the homes into “presentable status,” Gaither said.
The grant called for residents to submit applications to the town and a committee chose the homes based on a set of criteria that included an emergency need for repairs, the age and income of the applicant. The home has to be one that needs emergency repairs or rehabilitation.
“I said, ‘I’m going to give it a shot,’ ” Black said of completing the application.
She didn’t immediately believe she’d been chosen from among other applicants because it was some time before she heard from the committee. She all but gave up hope until she received notification her name had been selected.
Black knew the roof was her biggest need along with some new siding and some electrical work. Black was able to get those items fixed and what she calls her extra bonus repairs.
It took construction crews 45 days to give Black a new roof, siding and to rework her wiring. Her bonus fixes included railing for her porch, new windows, new floor, new cabinets, new doors, a doorbell, shutters, a closet and a hot water heater.
Black said the repairs became overwhelming because she’s had some health issues and was not able to work for sometime.
“I didn’t know where to start,” she said.
She’s amazed at the work and very grateful to have been selected.
“It’s beautiful. I didn’t expect this much. I thank God,” she said.
She did have to pack up her home, but the grant provided a portable moving pod where she was able to store all of her belongings.
“Everyone was great — the town, advisory committee — the contractors were fabulous,” Black said.
Black joked that she was delayed in coming to the door for a Post reporter because she couldn’t hear the new doorbell in her mansion, she said with a chuckle. The home, which has two bedrooms and one bathroom, was a Habitat for Humanity home built in 1993 for Black and her family. She now lives at the home with her four pitbulls.
“I am just so happy,” she said.
The construction has been underway since late last year, but the project actually began in early 2011 with the town looking into acquiring the grant.
Town Administrator Macon Sammons knew of the grant and looked into seeing if the town qualified. Once the town determined it qualified, Gaither began collecting data.
Residents began the application process in March and April 2012 and at the same time Gaither set out to determine if some of the homes were historical.
Once the applicants were chosen it took two weeks to compile all of the approved applicants.
Town Administrator Macon Sammons and Mayor Barbara Mallett traveled to Raleigh for a presentation with state officials and were approved for the grant in late 2012, Gaither said.
In early 2013, the town created a project committee along with Gaither, a project management team and a project consultant. Throughout last year, Gaither had to contact attorneys to verify deeds to properties, find a new project administrator after the last person left and the first and second construction projects were completed by November.
So far the town has spent $125,000 of the grant and Gaither says they’ll continue repairing homes until the money is gone.
The list for homes that need repairs has already been chosen, he said, so no new applicants are being accepted.
The town partnered with Salisbury Community Development Corp., to help them manage the entire grant project.
There are currently three homes undergoing the bid process by contractors. Gaither said there have been as many as six contractors that have bid on a single home.
Gaither said an emergency repair is one that can include a leaking roof, dilapidated floors or bathroom that has moisture damage, while a home rehab is one that has no air conditioning or heat, needs a new roof, needs gutters, siding or floors.
Each home is considered one individual project and requires a new bid process. The town looks at the lowest bidder, but contractors must be state approved and have all the necessary licensing.
Of the homes that have been completed, Gaither said, the residents have all said they were satisfied with the work. Residents complete a survey at the close of their project.
The public is invited to a 10 a.m. open house and ribbon cutting at Robbin Black’s home, 312 Torbush Drive, on Wednesday.
Contact reporter Shavonne Potts at 704-797-4253.