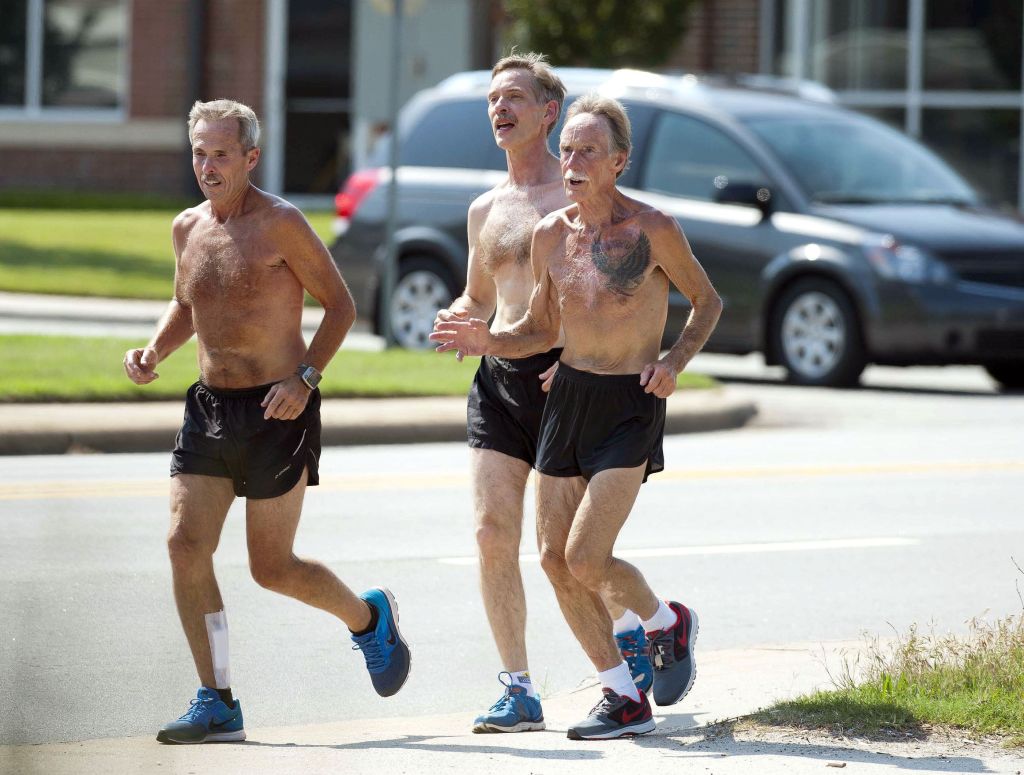 The other day, Richard Kelly was out for his afternoon run along Statesville Boulevard and Innes Street. Richard does this run almost every day, and many drivers are very familiar with him. That day, a cyclist pulled up beside him and started a conversation about his next bike ride and how much he had loved following the last one.
Problem is of course that it wasn’t Richard who did the bike ride. Richard has been told “I’m thinking of taking one of your running classes.” Another problem, Richard doesn’t teach those classes.
Dan Roseman has been fielding the same questions. He has heard comments (only good ones, I am sure) about his column and articles that he writes in the paper. One lady said, “I know you from your picture.”
Here is a little info on Richard: He lives in Salisbury with his wife Jane, and has two sons, Rick and Mike. Richard grew up in Salisbury and Charleston, S.C. He served in the U.S. Marine Corps from 1968 to 1970.
Richard made some bad lifestyle choices, including drugs, alcohol and a poor diet. When his youngest son, Mike, was born in 1979, Richard had a vision that the bad habits were going to end his life. He made an immediate decision to proceed with positive changes and headed for the Knox Middle School track to start running. Within a year, he was up to 8 miles daily and his weight had dropped considerably from 215 pounds.
Richard now runs 6 miles daily and regularly enjoys peanut butter straight from the jar (so do I) and Dairy Queen Peanut Butter Blizzards. Richard works for the city of Salisbury as the risk manager and is active at Landmark Church.
And here is Dan’s bio: He was also born and still lives in Rowan County. He is married to Pam, and his two kids are Alden and Raegan. Dan also has a shepherd named Rufus. He met Pam at the old Salisbury Y and they started running together.
Dan has worked as a tax accountant for Delhaize America for 26 years and has been running for about 30 years. His five marathons include two of the most challenging on the planet, Antarctica and Death Valley (done on his 10th wedding anniversary).
Dan has been an active member, officer and board member of the Salisbury Rowan Runners for the past 20 years. Dan is also active at Grace Lutheran Church. Pam says Dan has soft spots for sour cream, hot sauce and Yuengling beer.
All I am admitting about odd food habits is that I can’t pass up a brownie and occasionally eat cream cheese out of container.
Here are just a few more of the humorous times that Richard, Dan and I have been mixed up. Once, at least 10 to 12 years ago, my company had a Christmas dinner at the Warrior Golf Club. The waitress kept looking at me and smiling. Of course, I hoped she was flirting, but what she really wanted to know was how I had gotten dressed so quickly when she just saw me running in Salisbury on Statesville Boulevard.
Dan used to hear from folks all the time that they had seen him running earlier in Salisbury. Though Dan did run in Salisbury regularly, the timing wasn’t right and people were mistaking him for Richard. Dan has received comments about him being on the Novant (then called Rowan Regional Medical Center) billboards, that they recognize him from his picture on the columns in the paper, and he was even approached as me at one of my book signings.
A couple of years ago, Pam Roseman and I started to conjure up the idea of us all running together. We knew we had to run Richard’s course at about the time that he normally does it. We thought there would be lots of smiles, and hopefully no wrecks from confusion. (“How can there be three of them?”)
On Tuesday afternoon, much to the delight of the three of us and Dan’s wife Pam, an Ironman triathlete herself, the three of us went for a run together. I have known Dan for at least 20 years, but formally met Richard for the first time within the last couple of months.
Pam and Post photographer Jon Lakey (we had to pull him away from working on his new and wildly successful High Rock column) made a bunch of pictures by driving ahead of us. We all wore black running shorts and no shirt, because that is what Richard normally wears on his runs. The temperature was in the low to mid-90s and not much of a breeze was blowing, so there was plenty of sweating going on.
Quickly, people started blowing their horns and waving, and several hollered and waved from the sidewalks. One group of construction workers hollered “Hey Richard!” and we all laughed saying that we should have said, “Which one?” Another guy looked amazed and said, “Whoa, you all must be running buddies!” One of Richard’s friends called him that night and wanted to know about successful cloning of half-naked runners.
Besides all being long-time runners, we found that we have a good bit in common. We all believe in regular physical activity and a healthy diet except for a few oddities. We don’t take any regular medicines, and we are fortunate to have great overall health. Each of us buys our running shoes from Ed Frye at Phidippides and has for many years. We believe that running helps our mental acuity. Our faith and families are important, and we are all having a great time on life’s journey.
To sum all of this up, it was a fun and lighthearted afternoon, even though the sweat kept getting in our eyes. Dan has offered to sit in for either Richard or me if our schedules get too full for just one of us to keep up. I wonder if anyone will know the difference.