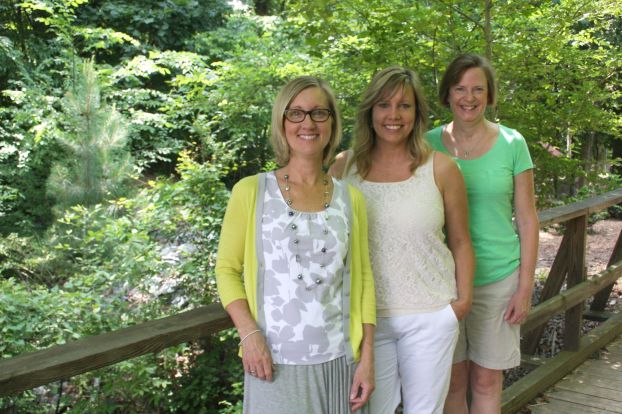 Building bridges out of poverty

CHINA GROVE — Three women in China Grove are building bridges.
The Rev. Alexis Coleman is pastor of First United Methodist Church in Landis. Anne Corriher is executive director of Main Street Mission. The mission is partnering with Coleman and other local churches to create a Bridge Builders program, designed to help families in poverty take steps toward a more stable life. Hope Oliphant, the third member of the trio, will serve as the new organization’s community outreach advocate.
This initiative is based on Bridges Out of Poverty, a program Coleman worked with when she pastored a Charlotte congregation.
Just after Coleman came to Landis last summer, MSM hosted a poverty meal. She soon met with Corriher about the possibility of bringing a similar Bridges initiative to the South Rowan area. It is meant to be an extension of Main Street Mission’s ministries.
In the meantime, Oliphant, a married mother of four, felt she was being called to foreign mission work. She and her husband, Steve, sold their house in preparation to move the family to Mexico. But those plans fell through, and Oliphant, who serves as youth director at First United Methodist Church through July, began looking for more ways to get involved in local charity work.
When she took the training for Bridges Out of Poverty, she says, “It all clicked.”
The group’s first brainstorming meeting took place in January.
“We just started inviting other people into the conversation,” Coleman says.
“People need food,” Corriher acknowledges, “but they need other things as well, other resources. We’ve helped families informally in the past, but it made more sense to go with a program.”
The mission gives people a helping hand, Coleman says. The Bridge Builders program, she says, represents a step forward, “moving from where you are to a more stable life, with more tools to help yourself.”
“It’s not about what we want,” Corriher says. “It’s about families setting their own goals.”
The three will work together to identify five families who have been served by the mission, and who are ready to take that step.
Families will be invited to participate in a 15-week workshop entitled, “Getting Ahead.” The class will meet on Mondays from 5:30 p.m. to 8 p.m. at the South Rowan Library. A meal and childcare will be provided, and parents will also receive a weekly stipend as an incentive to attend.
When families complete the course, they’ll be assigned a Hope Team to walk with them for the next year or two, to provide them additional support. Training for Bridge Builders volunteers is set for 5-8 p.m. Sept. 7 and 21, and Oct. 5 and 19. Participants are asked to bring finger foods to share.
The classes for families will focus on goal-setting and planning for the future, two skills virtually non-existent in the world of poverty, according to Coleman.
Corriher and Oliphant will be visiting local churches and writing grants to support the new ministry. Coleman estimates that the budget will be $45,000 for the first year, which would cover operating expenses and costs for meals, childcare and stipends for the class. The mission has committed to raise $10,000 of this amount.
Oliphant knows she’s about to take a job for which no salary is yet available.
“I think it’s so cutting edge for our little town,” she says of the Bridge Builders program. “I kinda took a leap of faith. I felt I had been called for mission work, but I thought it was for foreign missions.”
She later realized the mission work was in her own town. Since she and her husband ended up downsizing their home, there was no need for her to have a full-time salary.
“I could do whatever God was calling me to do,” she says. “It’s a calling when you feel like it’s a moral obligation.”
“The time is right for support from our churches,” Corriher says. “Some are ready to go that extra step.”
Coleman says that people grow weary of contributing to charities if they don’t see any changes. “We don’t want to enable people. We want to empower them. Empowerment is the key word.”
The Bridge Builder training for the Hope Teams, Oliphant says, helps volunteers understand why those in poverty sometimes make the choices they do.
“A bridge goes both ways,” Oliphant says. “You don’t just pull somebody up. We are working to create understanding. This is not the easy way. The messy things are relationships.”
“What better faith model can you get by building relationships?” Corriher asks. “Jesus was all about relationships.”
All three women see the Bridge Builders as a long-term process.
“It’s an investment in our community,” Corriher says.
“It will be a blessing and a stressing,” Coleman says. “There are definitely heartaches.”
For more information about the Bridge Builders program, call Anne Corriher at 704-855-2909.

SALISBURY — Hot weather has arrived and with its blunt heat, many home gardeners are phoning and sending e-mails with... read more