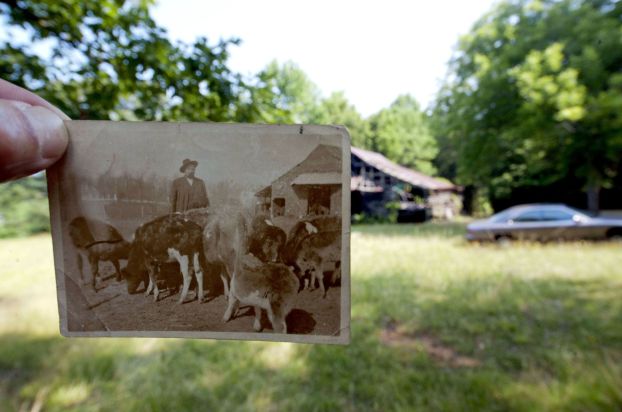 Tommy Schenck and Bob Blevins have their heads deep under the hood of a rusty 1972 Gran Torino.

Battery cables connect Schenck’s pickup to the car, and the men are confident the Gran Torino — the kind Clint Eastwood drove in the movie of the same name — will crank somehow, someday.

But ask the men, and they’ll tell you the real treasure is the vacant 1910 farmhouse sitting like a time capsule nearby.

“When you walk in this place,” Blevins says of the century-old home off Old Beatty Ford Road, “it’s like time stood still.”

Sure enough, some of the original light fixtures hang from the ceiling in the front hallway and parlor. Tommy thinks this was one of the first country houses in Rowan County to have electricity — at least that’s what he always heard as a kid.

The wood above a back-room mantle reveals the spot where a wall clock had been hung. In a closet just feet away rest clothes that look to be the styles of the 1940s.

The four-paned windows are functional. Each spindle in the staircase and upstairs bannister is still intact, and Schenck and Blevins can’t get over how solid the stairs are.

You don’t even hear a creak, Blevins says, trudging upstairs. He notes how many of the horizontal wooden boards comprising the walls — the interior was never plastered — are all one piece.

The oval, beveled glass door in front is original to the house, as is the wide, 42-inch door with glass in the back. Four downstairs mantles are still in place, and plenty of beaded ceiling survives, as does the original woodwork throughout the house.

But time and neglect have taken their toll, too. The back section of the house where the kitchen was has caved in. The upstairs is showing some gaps of light through the ceiling to the roof.

It’s a risk walking to the center of the room.

Dried-up leaves cover the downstairs hall. You have to be careful to step in the right place or otherwise risk pushing through the floor.

Blevins confesses he’s no expert, but he thinks the old Schenck House, built by Tommy’s great-grandfather in 1908-1910, probably should be dismantled by an architectural salvage company looking for some great wood and other period artifacts. What’s left could be pushed down or burned up for fire training.

Fate and circumstance brought this house into the worlds of both Schenck and Blevins.

But as these things go, the house eventually was sold out of the Schenck family to Keith Overcash, Bob’s son-in-law, and after 20 years, Keith died this past February, leaving everything to his mother, Bettie.

All of a sudden, Bettie had almost 9 acres of property, about six abandoned cars that Keith always meant to restore, a disintegrating barn, a granary, doublewide and the 1910 farmhouse.

“My wife wants to know, what are we going to do with it?” Bob says.

Bob Blevins can’t help but be enthralled by the house’s history, and 51-year-old Tommy Schenck is sort of his family’s historian. He went to high school with Overcash and knows he would never have some of the cherished documents and photographs from the house if anyone other than Keith had ended up with the house.

On the hood of an old Mazda truck — one of those vehicles Keith always intended to bring back to life — Schenck spreads out old confirmation, baptism and Sunday School attendance certificates from the Schenck family.

His great-grandmother Maggie was born in 1872, and he pulls out her baptism certificate from 1874. He also flattens out J.W. Schenck’s church confirmation paper from 1888.

“Pretty and frame-able,” Schenck says of all the documents on the truck’s hood. The Schencks had close ties to Ebenezer Lutheran Church, which is within full view, just down the road.

Tommy’s many black-and-white photographs include one of John Wesley Schenck in front of the farmhouse with everyone who helped him in building it. The front of the house in 1910 looks almost exactly as it does today.

J.W. Schenck was a farmer, boilermaker and operator of a government still — the legal kind before Prohibition. Growing up, Tommy Schenck says, he often was asked if he were kin to J.W. The people usually followed that question with an observation about how good J.W.’s liquor was.

“Another thing I heard was when Prohibition hit, it didn’t slow him down none,” Tommy says.

J.W. Schenck died in 1941. After Maggie passed away in December 1963, Joe Schenck took possession of the house and started storing stuff in it.

You could hardly walk through the house because of all the junk, Tommy says, and the grounds around it were filled with scrap metal.

“He called it merchandise,” Tommy added of all the items inside, acknowledging his grandfather also had an eye for unusual antiques.

“It was all stuff he thought he could make money off of, and he usually did.”

Joe Schenck could go to the junk sales in Rimertown, buy a box of miscellaneous stuff for $5 and make $200 by selling it later, Tommy says.

A longtime employee of Cannon Mills, Joe Schenck also dabbled with small engines and John Deere tractors. He had a love affair with hit-and-miss engines, and Tommy sometimes accompanied his grandfather to thresher reunions, where if you took a display engine you could get in free.

Joe Schenck died in 1991. Tommy’s Uncle Sonny inherited the place and soon sold it to Overcash. Blevins says Keith had hopes of restoring the house.

“But he spent 20 years cleaning stuff out and never did get it finished,” Blevins says.

Tommy and Bob look around and judge that 98 percent of the wood in the house is pine, probably cut off the land and made into boards at a local saw mill.

Schenck chastises himself for not learning more about his family’s history when the old-timers were still around to share it with him. It is tied closely, of course, to the German settlers who came to this part of Rowan County from Pennsylvania.

“I didn’t know better when I was younger to ask any questions,” he says.

At his own home, Tommy Schenck has a 1939 Chevy, a 1953 Ford, and he’s building an A model. He and Blevins are trying to work out a deal on the Gran Torino, which Tommy’s grandfather bought new more than 40 years ago.

When you think about it, the car is just one more time capsule.

SALISBURY — It all started 57 years ago when Charlie Walker and Frank Yardley began writing letters to each other.... read more