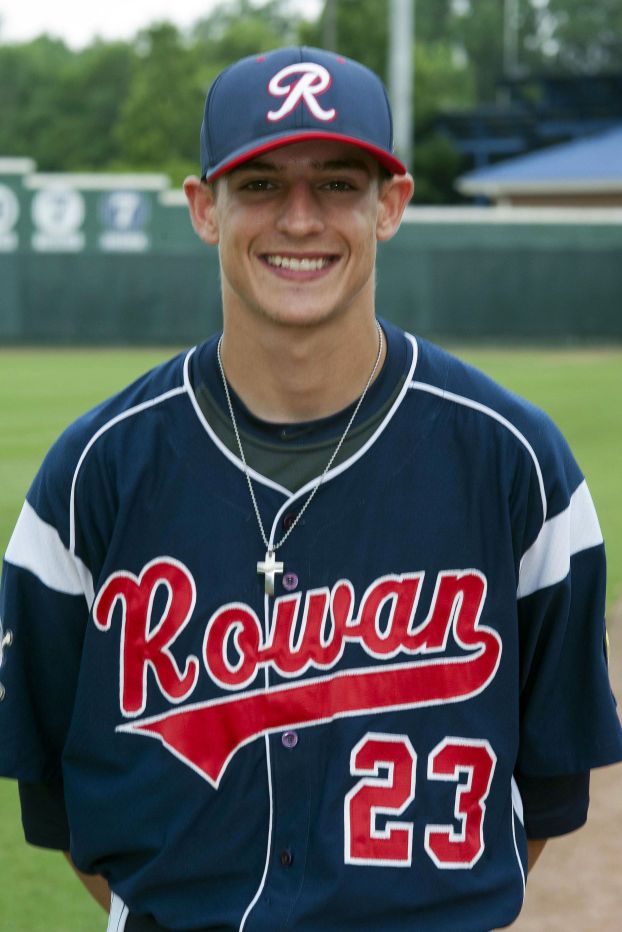 Rowan County used a committee of five pitchers, got three hits and two RBIs from Riley Myers and beat Kernersville 4-2 at East Forsyth High on Thursday night.
Michael Pinkston also had three hits for Rowan.
Starter and winner Hunter Shepherd, Ryan Jones, Brandon White, Heath Mitchem and Harrison Baucom, who made his season debut and earned a save, pitched for Rowan. Rowan hurlers held Post 36 to seven hits.
Shepherd threw five innings and fired 13 first-pitch strikes.
Stephen Hemrick had two hits for Kernersville.
Rowan had 11 hits and overcame three errors. Rowan’s three-run third proved decisive, and Rowan added another run in the seventh.
Kernersville scored both its runs in the third inning against Shepherd. Kernersville (14-6) had won three straight since losing to Rowan at Newman Park.
Rowan (11-4) returns home tonight for a divisional game against Southern Rowan, which has hasn’t played officially since June 6. Southern (3-7) had three straight games washed out, including one at Newman Park, and then had some scheduled time off for vacation trips.
The Mark Norris Memorial Award (Rowan Player of the Year) and Patrick Snider Memorial Award (Rowan Pitcher of the Year) will be presented before the game.
Rowan and Southern Rowan will be busy the rest of the way. The regular season ends June 26.
Rowan 003 000 100 — 4 11 3
Kernersville 002 000 0 00 — 2 7 4
WP — Shepherd (1-0). S — Baucom (1).

East Rowan’s Nick Lyerly has advanced to the semifinals of the N.C. Junior Open in Roaring Gap.
Players qualified through stroke play, with the top 64 moving on to match play.
Lyerly defeated Huntersville’s Blake Fiest 3 and 2 in the Round of 16 before winning in 19 holes against Charlotte’s Will Simmons in a Thursday quarterfinal.
South Rowan’s Davis Richards won 1-up over Asheville’s Chris Akers in the Round of 16 but lost to Huntersville’s Patrick Cover 1-up in a quarterfinal.
Lyerly is matched up with Wake Forest’s Alex Smalley in a semifinal today at 8 a.m., while Cover takes on Mooresville’s Andy Perrino.
• In the eGolf Tour’s Mimosa Hills Open in Morganton, Frank Adams III has shot 71-64 — 135 and is 5-under. Johnny Kyger is at 69-67— 136, and Will Collins has shot 69-70 — 139. Not all the golfers were able to complete the second round on Thursday.
• Bob Jones made a hole-in-one on No. 15 at The Club at Irish Creek.
Jones used a 6-iron on the 154-yard hole. Witnessing the feat were David Brackett, Ed Hopper and Melvin Fogg.
Harrison Smith pitched a one-hitter for Rowan Junior Legion in 6-0 win against South Rowan on Thursday.
Chandler Lippard had three RBIs. Jordan Wise and Tanner File had two hits each.
The Kannapolis Intimidators lost 10-7 at Charleston on Thursday despite three hits each by Carl Thomore and Jacob Morris.
Michael O’Neill hit two home runs for Charleston and drove in three.
• Nick Lomascolo (Catawba) pitched two scoreless and hitless innings in relief on Wednesday for the State College Spikes.
• Chris Dula (Catawba) had an eventful two-thirds of an inning in his season debut for Spokane.
Dula struck out two and walked two.

Comadoll may be a ‘goofball’ off field, but he’s all business on it