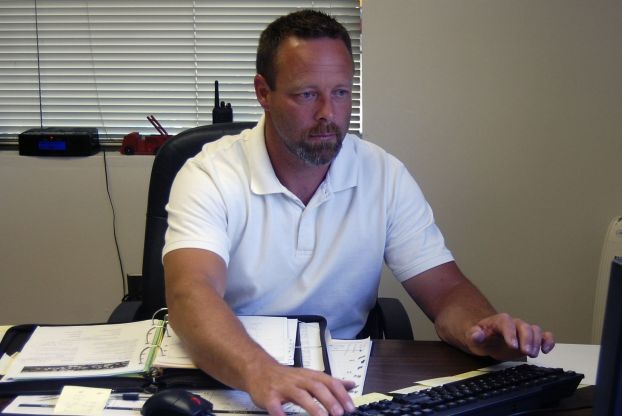 Tim Beck takes the ‘driver’s seat’ of the school system’s transportation department
In 1996, Tim Beck started a new job working as a janitor for the Rowan-Salisbury School System. Eighteen years later, he has become the district’s director of transportation.
“Transportation touches everyone’s lives,” he said, explaining that transportation doesn’t just deal with the yellow buses, but driver’s education, maintenance vehicles and activity buses.
“I really enjoy the logistics of making all this work,” he said.
Ten years after he began working in maintenance, Beck applied for a route coordinator position with the transportation department. Although he didn’t get the position, Beck’s interview made a lasting impression, and he was encouraged to apply for the next position that became available — parts manager.
He took that position in May 2006. As a parts manager, Beck ordered parts and supplies for the transportation department.
Two and a half years later, he became the department supervisor, where he oversaw day-to-day operations, evaluated employee performance and would step in for former Director of Transportation Judy Burris as needed.
When Burris went on medical leave in early March, Beck temporarily stepped into the director’s position.
Over the course of several months, school administrators “saw what this department could do with me in the driver’s seat,” Beck said, who beat out 19 applicants for the position.
As the director, Beck said he’s “swamped,” dealing with the district’s budget, maintaining compliance with North Carolina Department of Public Instruction policies and working with Superintendent Dr. Lynn Moody and Assistant Superintendent Anthony Vann.
“It’s not a day and night difference for me,” he said.
Beck said that the director position varies from director to director.
“We are making some changes,” he said. “A lot of what I did as a supervisor, I want to carry over as a director.”
He added that he wants to continue to be involved with the shop and drivers.
Beck supervises 23 employees in the shop, 40 drivers and monitors who specifically work on exceptional children buses, and 350 regular bus drivers.
Currently, he’s looking to fill a number of positions to complete his team.
Beck is currently finalizing details for his replacement as supervisor. He’s also looking for a lead mechanic, mechanic, route coordinator and a fueler.
Beck said he likes to look at the people he already has in position before hiring from the outside.
Beck’s official start date was June 2, and he will be making $68,800 annually.
Beck is a Rowan County native, and is a 1991 graduate of West Rowan High School.