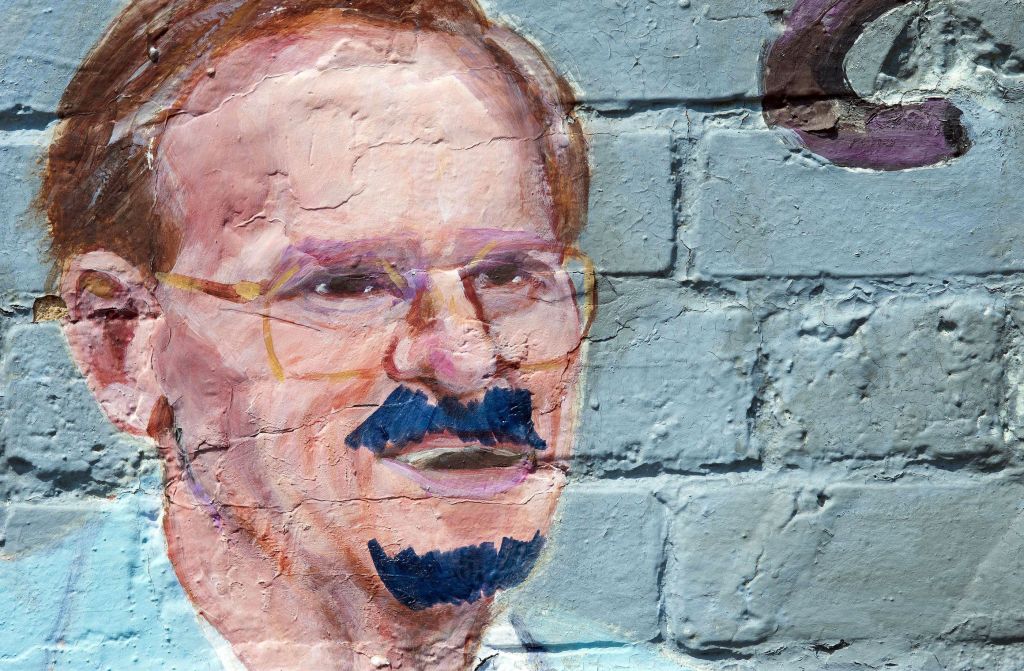 SALISBURY — Faces on Salisbury’s mural have been defaced.
Salisbury Post photographer Jon Lakey noticed Tuesday evening that 10 men portrayed in period costumes in the mural have been given goatees or, in one case, just a mustache.
The vandal or vandals used either a dark blue permanent marker or blue paint. Ralph Ketner, Ed Clement and the late Paul Bernhardt and Jim Hurley are among the men whose likenesses have been damaged.
The 1980 mural, officially titled “Crossroads — Past into Present,” is one of the city’s more notable pieces of art. The attraction was copyrighted long ago.
Located in the 100 block of West Fisher Street next to the Wells Fargo parking lot, the massive mural measures 127 feet wide by 48.5 feet high.
Salisbury native Cynvia Arthur Rankin painted the mural as part of the Third Century Artist program in 1980. It was commissioned by the Rowan Art Guild, and ownership eventually passed to a nonprofit group called Mural Preservation Inc., which pays for its periodic restorations and repairs.
Kaye Brown Hirst, an officer with Mural Preservation Inc. and executive director of Rowan Museum Inc., said she had not heard about the mural’s vandalism until being contacted by the Post Wednesday afternoon.
She promised the damage would be repaired. Hirst said she will stop by the mural soon to determine if there’s anything she can do to remove the markings.
“We have been very fortunate for there not to have been any major desecration to it” over the years, Hirst said.
More than 100 local citizens are depicted in the mural wearing period fashions from the early 20th century. The street scenes also show Salisbury buildings from that time period.
As a way to pay for the mural’s upkeep, local citizens have been added every now and then since the mural’s dedication.
Rankin, who lives in the Washington, D.C., area, has come back periodically to do restoration and repair work on the mural. She has been assisted on several occasions by artist Diane Monday.
Earle Kluttz and Raines Thompson also have done restoration work on the Salisbury mural, which has been featured numerous times in newspapers, magazines, brochures and televisions.
All of the portraits defaced were within reach from the parking lot.
Contact Mark Wineka at 704-797-4263.