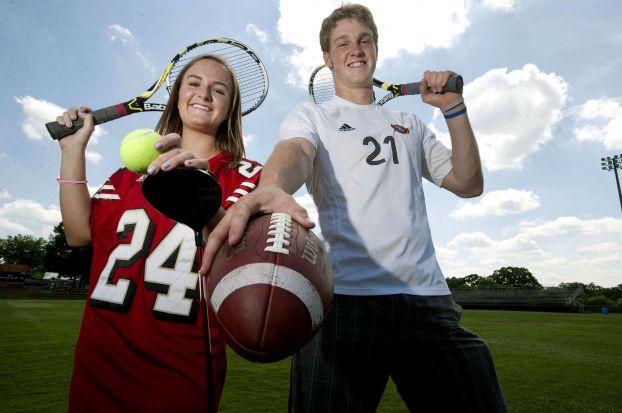 Comadoll may be a ‘goofball’ off field, but he’s all business on it

SALISBURY — A common entry for favorite animal of Salisbury High School athletes on “meet the players” forms is Clint Comadoll.
Comadoll is, of course, human. But he’s taken on a persona that’s made him a hit around campus at SHS. Many afternoons in the fall, Comadoll would rush to soccer practice then hit up football practice and do it again the next day. If comedy were a sport, he’d head to open mic night after that.
Comadoll’s own “meet the player” form included quips such as his biggest rival being “speling,” his hobby list that included “ballin, stackin’ fruit, counting the freckles on my face, and making lifesize statues out of peanut butter.”
Three words that describe him? “Really good at math.”
“I’ve always been a goofball, but more of an unsung goofball,” Comadoll said. “Now it’s more out there.”
But there’s a business side of Comadoll, too. This year he was all-county in football and soccer and all-state in tennis. A sizable presence at 6-foot-4 and 210 pounds, he also had the speed and athleticism to excel in all three.
“He harnessed his energy exceptionally well,” SHS soccer coach Matt Parrish said. “He was almost too amped up at times. If he got angry, you almost felt sorry for the other kid. He’s one of the top 5 percent of athletes I’ve coached at Salisbury.”
Comadoll’s strength reached scary levels on occasion. The Hornets had a tough year on the gridiron, but the highlight of the season came in their first win at Lexington. Comadoll had five sacks and six tackles for loss to get SHS out of its funk. One sack of Lexington quarterback Raekwon Byrd ended with Comadoll ripping a piece of Byrd’s jersey off, resulting in a stoppage in play. SHS hung on for a 25-21 victory.
Comadoll earned three championship rings during his time at SHS. He was on the roster as a freshman for the 2010 football team that won a state championship, making a sack in the title game. He was on the field for both of the soccer team’s state crowns in 2011 and 2013. The most memorable moment for Comadoll was winning the 2011 crown, which was a double-overtime thriller against Carrboro that ended on Emmy Turcios’ golden goal.
“A lot of people on the team I’ve been friends with my entire life,” Comadoll said. “I probably play soccer the most because it’s the easiest sport to just play a pickup game in.”
The soccer team went 27-1 this year, breaking a school record for victories and finished the season winning 25 consecutive games. Comadoll, one of 10 seniors on the team, was primarily a defender, but could score when needed. Comadoll netted the first goal of the game in the west final against Lake Norman Charter in the driving sleet to propel the Hornets to the state title match. In the championship against First Flight, he assisted Bobby Cardelle for the game-winner in a 2-1 victory.
“Clint was clearly offensive-minded,” Parrish said. “But when we needed him to stop people, he could be a handful.”
It could be said Comadoll is the male counterpart of Madeline Hoskins, the county Female Athlete of the Year. He’s balanced football and soccer each fall for the past three years, never asking for a break or putting himself above the team. Academics weren’t put on the back burner either. Comadoll’s GPA is above a 4.0.
“He’s been everything Salisbury High’s wanted him to be,” Salisbury football coach Ryan Crowder said. “He’s never been an over-the-top verbal guy. He’s a lead-by-example guy. He always has a positive attitude.”
On the tennis courts, the Hornets were a top 5 team in 2A thanks to the return of Michael Ogden. Comadoll teamed up with Spencer Storey to reach the state semifinal in doubles play. Comadoll only played tennis for three years, but progressed each season.
“The biggest difference in my tennis game is the second serve,” Comadoll said.
Comadoll won team MVP for football, the coaching award for tennis and the Ludwig Award, which is given to the SHS Male Athlete of the Year.
Clint’s dad played football for a year at Winona State in Winona, Minnesota, where a lot of his family lives. Clint had the same option to play at Winona but will go to Appalachian State and major in chemistry.
“I wanted to go to a school that I wanted to go to, not just to play football,” Comadoll said. “I was thinking about playing football in college a lot.”
Comadoll will go to App and probably be all-world at club sports.
“Clint’s got a great spirit about himself,” SHS tennis coach Milton Griffith said. “He’s always positive and an upbeat-type person.”
Not bad for a goofy kid from Salisbury.

‘Harriet the Spy’ — it’s all about being a writer

SALISBURY — It turns out “Harriet the Spy” is not just a simple children’s book about a nosy girl. It’s... read more