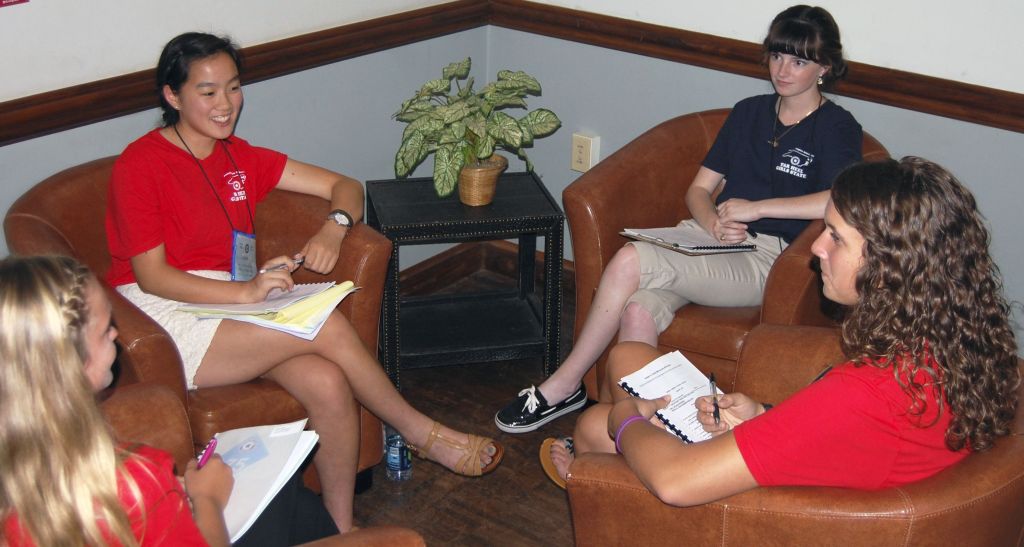 This week, Catawba isn’t a college – it’s Tar Heel Girls State.
Approximately 300 girls from across the state of North Carolina will be electing officials, drafting bills and approving laws during the 75th annual Girls State held at Catawba College.
Girls State is a weeklong workshop that gives rising high school seniors the hands-on opportunity to learn about state and local government though non-partisan mock legislative sessions.
“In school you don’t get the opportunity to actually do it, you just hear definitions,” said Abby Cozart, a Carson High School student.
Veronica Leasure said she decided to attend Girls State because she wanted to learn how government works.
“I didn’t really have a good knowledge of politics,” the North Rowan student said.
“I saw it as an amazing opportunity to see a whole new side of politics,” said Salisbury High School student Alexandra Warren.
Warren said she’s considering a possible future career in politics, so Girls State gives her the opportunity to experience government first hand.
Cozart is the third member of her family to attend Girls State.
Her mother attended in 1984, and her sister attended in 2011.
“There’s a lot of legacy here,” said Program Director Julie Cooper.
Cozart is a member of the American Legion Auxiliary, so she’s heard about Girls State for years.
“It intrigued me,” she said, adding that her interest, combined with her mother and sister’s glowing reviews of the program, made her want to attend.
They “had a blast” and “made friendships that would last a lifetime,” she said.
Cozart said participating in Girls State allows her to “see it unfolding and happening” in front of her.
The girls, who are called “citizens,” are divided into different cities and political parties.
There are six different cities — each one named after a different color. Each city writes a charter and elects a mayor and other city officials.
The girls are also divided into two political parties — the Federalists and the Nationalists.
From there, the girls are allowed to develop their parties based on their own passions and interests, Cooper explained.
Using planks suggested by each city, the girls debate and devise a platform for their political party.
Cozart is a citizen of Yellow City and a member of the Federalist Party.
During meetings, the citizens use parliamentary procedure, something she particularly enjoys.
“I love parliamentary procedure,” Cozart said. “It keeps things formal.”
She added that she enjoys being in a professional business environment.
Throughout the week, the cities create chants and have cheer-offs, creating a sense of community and camaraderie, as well as adding a healthy dose of competition.
The girls are also divided into three different groups — Senate, House of Representatives and lobbyists.
Those who are elected to local positions, such as mayor or city officials, are lobbyists. They write bills, and then try to get them passed through the legislative process.
The House of Representatives and Senate review, debate and vote on bills.
In addition to legislative sessions, the girls hear from speakers, including Catherine Johnson from Davidson County Family Services, Maj. Diana Stumpf from the National Guard Headquarters in Raleigh with the recruiting battalion, attorney and former Miss North Carolina Janet Ward Black and 2013 Tar Heel Girls State Governor Rachel Hamm.
The speakers will talk about patriotism, the American flag and “what it means to be an American and a citizen at the highest level,” Cooper said.
District Court Judge Beth Dixon of Rowan County swore the girls in as Girls State citizens Sunday.
Students will also attend a college fair, a financial aid workshop and practice their interviewing skills.
Tar Heels Girls State is the longest continuously running Girls State program in the nation and is sponsored by the North Carolina American Legion Auxiliary.
This year is the 13th year Girls State has been held at Catawba College. Participants stay in the school’s dorms and use its facilities throughout the week.
Next week, Boys State will be held at Catawba.