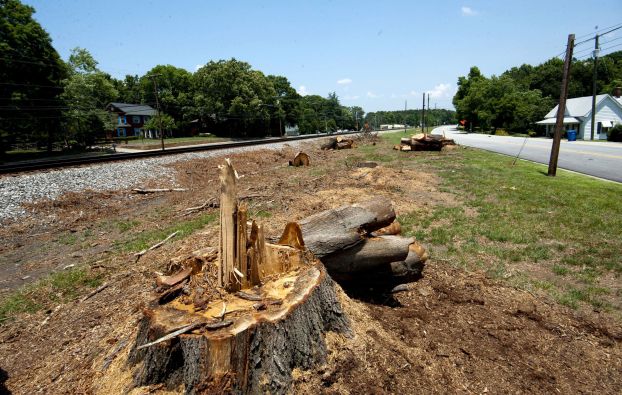 Poems are made by fools like me,
But only God can make a tree.
— Joyce Kilmer

By Susan Shinn
For the Salisbury Post
LANDIS — Residents here are furious after dozens of trees were cut down last week in preparation for the addition of a second railroad track through downtown.
The 10-mile expansion project stretches from 18th Street at Kannapolis to Fleming Candy Company near Airport Road in Salisbury. But the cutting of trees is most evident in Landis, where the railroad tracks run straight through the middle of town.
“They raped the town of Landis,” one resident said.
Town officials said they were aware of the plans, yet it was the timing that caught them by surprise.
The town had originally been told Landis was being skipped over on the clear-cutting process. But Mayor James Furr began receiving calls from residents beginning about 9:30 a.m. on Monday, June 9.
“In my 10 years in Landis government, this has been the No. 1 issue people have called me about,” Furr said Tuesday afternoon. “People in Landis are enraged. I’m not an engineer, but I don’t know why it had to be cut the way it was. It defies common sense. I personally feel deceived by it.”
He added, “There should have been some better coordination. We were told Thursday we were being skipped over, then the hammer falls on Monday.”
The damage was perhaps most heartbreaking near the intersection of East Taylor Street and North Central Avenue, where stumps the size of kitchen tables remained. The smell of fresh-cut wood permeated the concentric circles.
Town Manager Reed Linn estimated some of the trees at more than 150 years old.
“We try to keep our citizens informed about things so we don’t usually get a lot of calls when something happens,” he said. “If we get five phone calls, we consider that a lot. We got about 25 to 30 phone calls. This is a lot of calls.”
Kelly Seitz, resident engineer for NCDOT, is coordinating the construction project with his organization, the towns of Kannapolis, Landis and China Grove, NCDOT Rail, Norfolk-Southern Railroad, and the N.C. Railroad Co.
“The trees have always been scheduled to be cut down,” Seitz said Tuesday afternoon. “The plans have always showed taking those trees down. Those trees were located in the railroad’s right-of-way.”
Seitz said the stumps would not be removed until after erosion control is installed. He also said that a new track means improved safety standards and increased sight distance — thus the need for more clearance on either side of the tracks.
Meanwhile, the area on either side of the tracks is now naked.
“The railroad track comes right through Landis,” said Blair Phillips, owner of Blair Phillips Photography in downtown Landis. “There used to stand these enormous trees. It looked beautiful down through there. It’s now bare and not attractive. It’s gonna be a fiasco here for a little while.”
Linn said that low-growth trees such as dogwoods and Bradford pears had been planted downtown some 30 to 40 years ago. Those, too, are gone.
Furr said that the irony was that an economic stimulus package from the Obama administration — which promotes green initiatives — had created an “environmental disaster in downtown Landis.”
“Feel free to quote me on that,” he added.
Yet Furr, who was born and raised Landis, also said, “I underestimated the pride in our town. It is more than I ever dreamed of.”
For his part, Linn tried to make the best of a bad situation.
“When construction is complete, we will be able to replant and landscape downtown once again, which is a very positive outcome.”
Cutting continued farther north along the construction route. On Tuesday afternoon, trees were also being taken down in the south end of China Grove along Main Street. An employee at Town Hall said that she had not yet received phone calls complaining about the project — “but they’ll be coming.”
Freelance writer Susan Shinn lives in Salisbury.