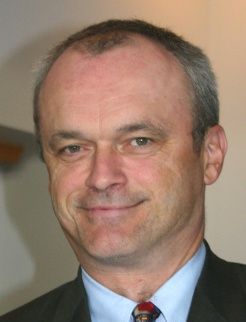 SALISBURY — As founder and director of NC Policy Watch, Chris Fitzsimon held nothing back Tuesday when ripping into Republican lawmakers at a meeting organized by the Rowan County Senior Democrats at Rowan Public Library.
Fitzsimon, the event’s keynote speaker, writes the daily Fitzsimon File and delivers a daily radio commentary broadcast statewide via North Carolina News Network.
His topic in front of about 30 seniors was “The Disaster in Raleigh.”
Not only did Fitzsimon blast Republicans for what he perceives to be regressive, detrimental decision-making in regard to voting rights, but the former spokesman of the Campaign to Protect America’s Lands also lambasted the GOP for policies regarding education, taxes, health care and environmental protection.
NC Policy Watch is the “antidote” to the John Locke Foundation, Fitzsimon said.
“Before this summer session began, there was a long list of reactionary decisions made by the N.C. General Assembly starting in 2013,” Fitzsimon said. “The defining, unconscionable vote was to refuse to expand Medicaid and provide health care coverage for 500,000 people under the Affordable Care Act or set up a health care exchange to make it easier for people to enroll in the Affordable Care Act.”
The budget the N.C. Senate passed this year “is the worst budget that has ever been passed in North Carolina since 1982,” Fitzsimon said.
The Senate budget, Fitzsimon said, kicks thousands of aged, blind and disabled people off Medicaid.
About 7,500 teacher assistants also are slated to be fired in the same budget, Fitzsimon said.
“The Senate budget, they say, gives teachers an 11 percent raise. I would actually say the Senate budget does not give teachers a raise at all,” Fitzsimon said. “It bribes them into giving up their career status projections. If they do, they get a raise.”
The Senate budget includes a 25 percent cut to technology systems in the courts, which Fitzsimon said is tragic seeing as how some of the courts in the state still use the MS-DOS operating system.
The N.C. House budget gives teachers a five percent raise that is not tied to giving up their career status, but Fitzsimon said they will pay for the raise by increasing the advertising budget of the state lottery.
“There are studies after studies. This afternoon, NC Policy Watch has a story going out on who plays the lottery in North Carolina per capita – $238 per capita in North Carolina for every adult 18 years or over,” Fitzsimon said. “In some counties in Eastern North Carolina, it’s over $500 per person per year. By no coincidence, those are the poorest counties in North Carolina.”
The House plan “is about cynical politics” while the Senate budget “is about hurting health and human services as well as education,” Fitzsimon said.
Americans for Prosperity, which Fitzsimon calls “Americans for the Prosperous,” is preparing to ramp up the “spin machine” to influence voters going into November.
Set to kick in 2016, the voter identification requirements legislators approved will make it more difficult for people to vote.
“It’s not just you have to have an ID when you go to the polls in 2016, it’s what kind of ID. In many states, you can use other documents. You can use utility bills, you can vote with a provisional ballot,” Fitzsimon said. “We used to have pre-registration for 16- and 17-year-olds in North Carolina to get them ready to vote when they were 18. We stopped that because (N.C.) Sen. Bob Rucho from Charlotte said his teenager was confused.”
The new requirement will make it harder on people who don’t have IDs, including “people of color, poor people, people in nursing homes, the aged, the blind and the disabled – the same people they are kicking off Medicaid.”
The state spent $500 million less this year on public education than before the recession, Fitzsimon said.
“They say we don’t have any money in North Carolina. We’re not using our money wisely,” Fitzsimon said. “The tax cut they passed last year in North Carolina, in this budget, will cost roughly $600 million. I don’t care what you heard from people, the majority of that tax cut goes to people who make more than a million dollars and goes to corporations.”

Fitzsimon to speak to Senior Democrats

Chris Fitzsimon, founder and director of North Carolina Policy Watch, will be the speaker at the Rowan County Senior Democrats... read more