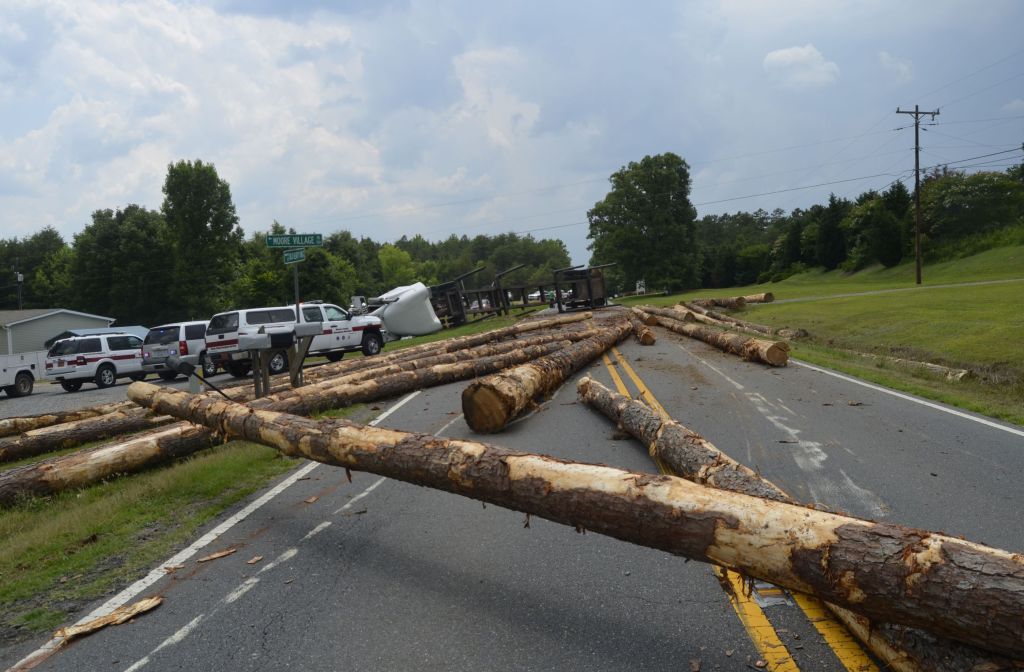 ROCKWELL — A truck driver was not seriously injured Monday when the load he was hauling overturned, spilling logs into the middle of the 7900 block of Old Beatty Ford Road near Moore Village Road. A trooper with the N.C. Highway Patrol charged John McRae, 59, of Richfield, with driving left of center following the single-vehicle crash.
Trooper J.P. Page said the driver dropped off the shoulder to the right, overcorrected and lost control of the rig, spilling a load of pine logs. He did have minor injuries, but refused medical care at the scene. Fire officials said he was pretty shaken.
McRae is a driver with T.W. Hathcock Logging Inc. of Locust. The incident occurred at 1:02 p.m., not far from Phaniels Church and Shuping Mill roads, where traffic had to be redirected. Bostian Heights Fire Department responded while Rockwell Rural Fire Department provided traffic control and redirected motorists around the wreckage.
Bostian Heights Fire Chief Mike Zimmerman said he expected two companies from New London with experience in picking up logs to clear the logs from the roadway.
There was some diesel fuel that leaked onto the ground, but Zimmerman said they won’t know to what extent until the cab of the truck is righted and they are able to see how much fuel was spilled. Fire officials estimated that all 75 gallons likely ran onto the ground. A haz mat team was en route to clean up the leakage. There was no major runoff of the fuel and there aren’t any nearby creeks or other water sources, but there is fuel leakage around the truck, he said.
Zimmerman said the fuel leak could be as minor as crews being able to sop it up or it may have soaked into the ground and could require that officials dig up the fuel-soaked dirt. The N.C. Department of Transportation was also called to the scene as a precaution, Zimmerman said, to determine if repairs needed to be made to the road.
Contact reporter Shavonne Potts at 704-797-4253.