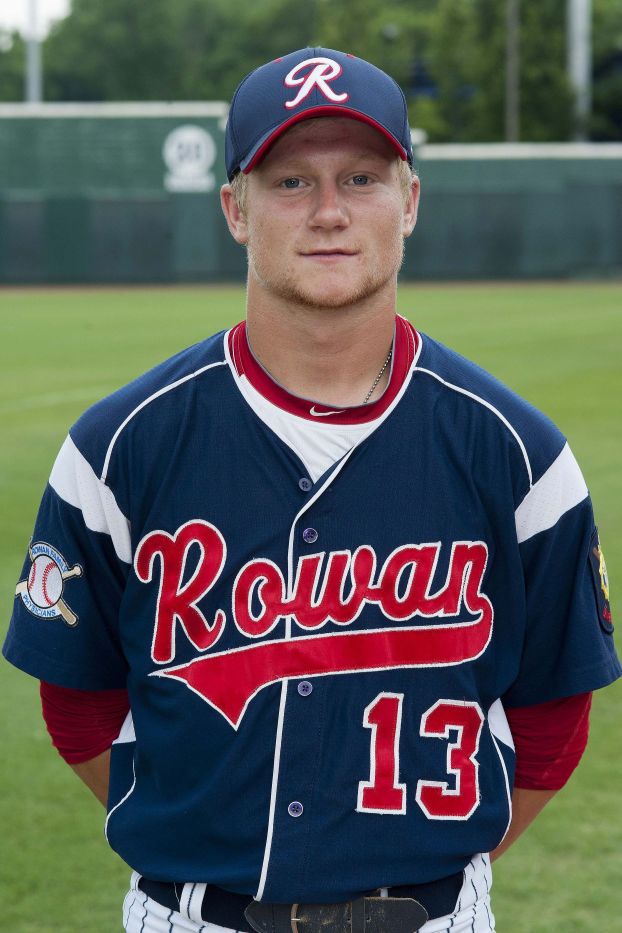 SALISBURY — Rowan County American Legion leadoff man Harrison Baucom went 4-for-4 and drove in four runs, but his most notable achievement was adding a new word to the English language.
Asked about Rowan weathering a lightning delay of more than an hour on Tuesday, Baucom declared, “We were mentally prepared, but then we had to re-prepare.”
Re-prepare?
Actually, that wasn’t a bad description of what Rowan did in a 12-2 victory over Stanly County in Rowan’s long-awaited divisional opener at soggy Newman Park.
All nine guys in the Rowan lineup scored or drove in a run, and Rowan took advantage of disastrous defense by Stanly.
The signature play of the game occurred in the bottom of the third — right after play resumed — when Rowan scored three runs without swinging a bat. Michael Caldwell scored on a wild pitch to start the frenzy, and Chance Bowden and Riley Myers steamed around the bases as Stanly (6-11, 1-1) threw the ball wildly twice. All three guys who scored on that crazy play reached base via walks.
“Tonight wasn’t really indicative of the kind of team Stanly has,” Rowan coach Jim Gantt said. “We shouldn’t get overly excited about it because we were able to score a lot of runs without doing a lot.”
What Rowan did best was play defense. Luke Setzer made a running catch in right. Dustin Ritchie called a fine game. Third baseman Riley Myers started an around-the-horn DP and speared a line drive. Shortstop Jeremy Simpson and second baseman Michael Caldwell were flawless, and Chance Bowden affected a game defensively as much as any first baseman in history. He made a diving catch of a bunt, a running catch of a foul pop fly and scooped balls out of the dirt.
On the play of the night, Bowden got his glove on a wicked shot headed toward right field and deflected it to Caldwell, who fired to relief pitcher Heath Mitchem, who covered the bag after a sprint from the mound.
“Hey, who says pitchers aren’t athletes,” quipped Mitchem.
Connor Johnson started on the mound for Rowan and put up zeroes, but when lightning halted the game with two men out in the Stanly third, Johnson didn’t return.
Cory Fries replaced Johnson and earned the win. He made it all the way through the seventh.
“With Connor pitching tonight, I didn’t think I’d be pitching early like that,” Fries said. “I just went out there and tried to throw strikes.”
He did that job well. He faced 17 batters and didn’t walk any of them.
“Cory has a chance to be good,” said Gantt of the North Rowan rising senior. “His cutter and two-seamer are coming along. He got a lot of groundballs and we turned a big double play for him.”
Stanly got its two runs off Fries on a sixth-inning bomb by Zach Almond.
“They were down eight runs, and it was a 3-0 count, so I wasn’t expecting him to be swinging,” Fries said. “He hit that ball good, but even after the homer, I still kept going after the hitters.”
Rowan was coming off an ugly road loss at Mocksville in which it didn’t do much right, but it bounced back with one of its better performances of the summer. Rowan added aggressive baserunning to its fielding gems, and usually that aggressiveness paid off.
“That Mocksville game left an awful taste in our mouths,” Baucom said. “We weren’t mentally focused at all up there, but tonight we stayed focused — even through that long delay. We were pretty good tonight, but we need to be more consistent.”
Rowan (10-4, 1-0) ended the game in the eighth when Ryan Jones hammered an opposite-field double that chased home Setzer for the mercy rule.
“I got a pitch that was low, but it was down the middle,” Jones said. “I didn’t think I’d hit it all that well, but then the outfielder just kept running and running.”
So did Setzer, and it was over.
“Baucom was going to make his pitching debut in the ninth,” Jones said with a grin. “I hated we didn’t get to see that, but it was a long night and I wanted to end it.”
Baucom will have to re-prepare himself to pitch at a later date.
ggg