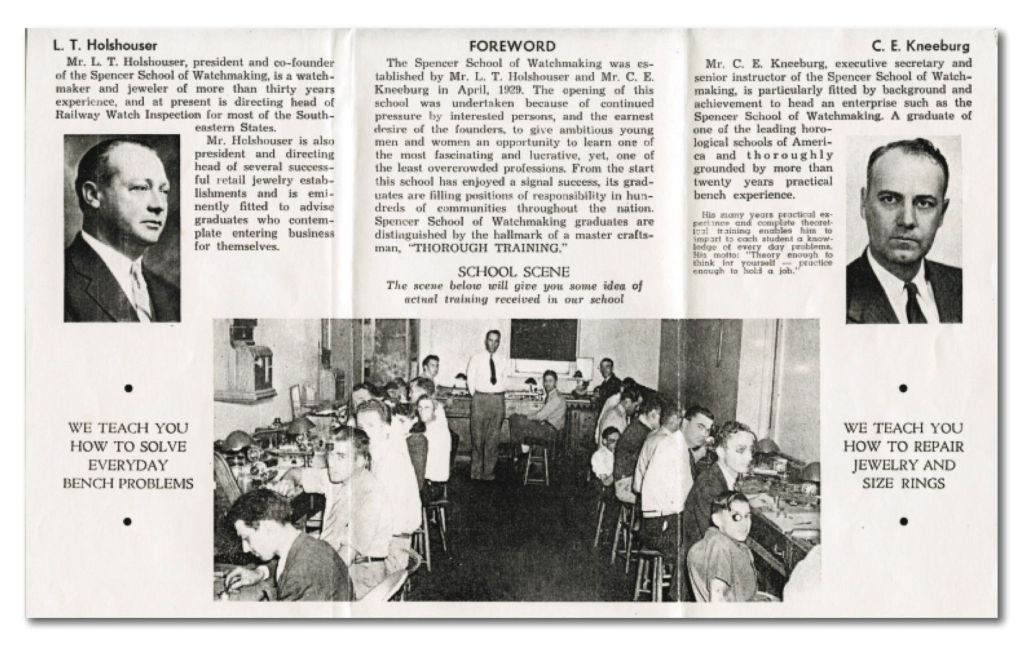 A recent story in the Post about the old Spencer School of Watchmaking led to local historian Betty Dan Spencer’s sharing more information about the school’s president and cofounder, Lon Tobias Holshouser. Pictured above is the inside contents of a brochure, given to Spencer by Eleanor Holshouser Manning — L.T. Holshouser’s daughter — which gives information on Holshouser (left) and cofounder C.E. Kneeburg (right), along with a description of the school. Holshouser, the brochure says, was a watchmaker and jeweler of more than 30 years experience and was at the time of the brochure’s printing directing head of Railway Watch Inspection for most of the Southeast. ‘Mr. Holshouser is also president and directing head of several successful retail jewelry establishments and is eminently fitted to advise graduates who contemplate entering business for themselves,’ the brochure adds. Spencer says Holshouser went into the jewelry business in 1910 with a partner named C.K. Howan. Their store was first located at 204 N. Main St., Salisbury, then moved to the Grubb Building (The Plaza today) after it was constructed. When the partnership with Howan dissolved, Holshouser continued in business on West Innes Street next to Spencer’s grandfather’s store, the Maynard Music Co. Holshouser died in 1959, and his business closed in 1960. Holshouser also owned Spencer Jewelry Co., according to Spencer.