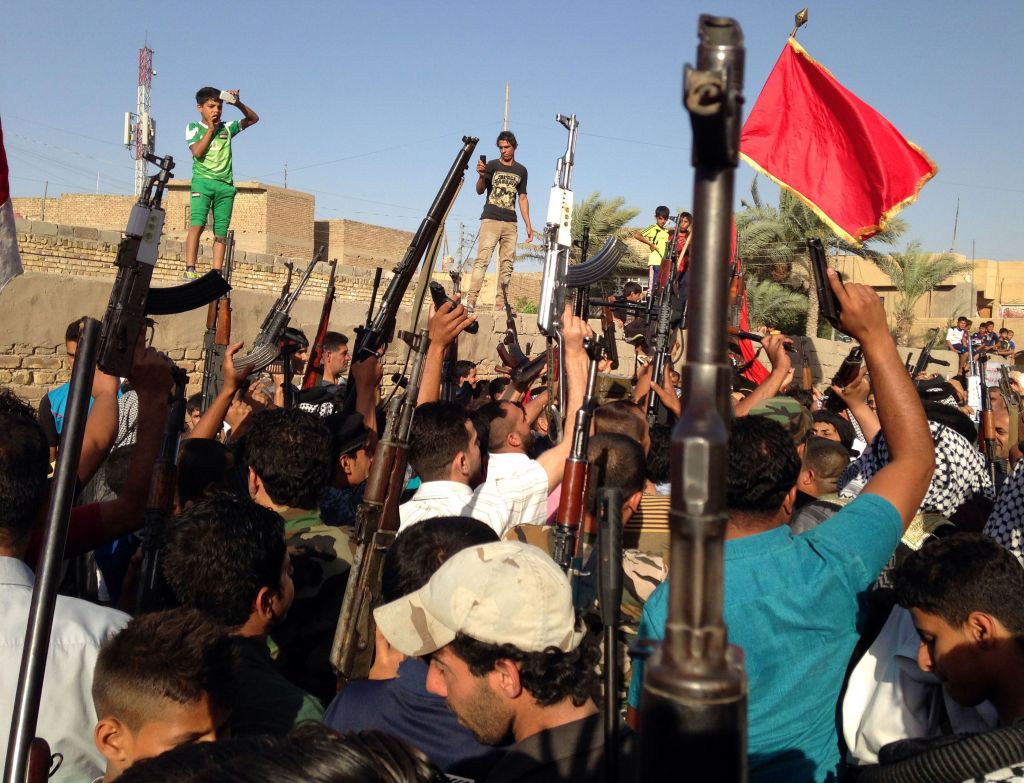 BAGHDAD (AP) — The Islamic militants who overran cities and towns in Iraq last week posted graphic photos that appeared to show their gunmen massacring scores of captured Iraqi soldiers, while the prime minister vowed Sunday to “liberate every inch” of captured territory.
The pictures on a militant website appear to show masked fighters of the Islamic State of Iraq and the Levant, or ISIL, loading the captives onto flatbed trucks before forcing them to lie face-down in a shallow ditch with their arms tied behind their backs.
The final images show the bodies of the captives soaked in blood after being shot at several locations.
Chief military spokesman Lt. Gen. Qassim al-Moussawi confirmed the photos’ authenticity and said he was aware of cases of mass murder of captured Iraqi soldiers in areas held by ISIL.
He told The Associated Press that an examination of the images by military experts showed that about 170 soldiers were shot to death by the militants after their capture.
Captions on the photos showing the soldiers after they were shot say “hundreds have been liquidated,” but the total could not immediately be verified.
U.S. State Department spokeswoman Jen Psaki said the ISIL militants’ claim of killing the Iraqi troops “is horrifying and a true depiction of the bloodlust that those terrorists represent.”
She added that a claim that 1,700 were killed could not be confirmed by the U.S.
On Friday, U.N. human rights chief Navi Pillay warned against “murder of all kinds” and other war crimes in Iraq, saying the number killed in recent days may run into the hundreds. She said in a statement that her office had received reports that militants rounded up and killed Iraqi soldiers as well as 17 civilians in a single street in Mosul.
Her office also heard of “summary executions and extrajudicial killings” after ISIL militants overran Iraqi cities and towns, she said.
The grisly images could sap the morale of Iraq’s security forces, but they could also heighten sectarian tensions.
Thousands of Shiites are already heeding a call from their most revered spiritual leader to take up arms against the Sunni militants who have swept across the north in the worst instability in Iraq since the U.S. withdrawal in 2011.
ISIL has vowed to take the battle to Baghdad and cities farther south housing revered Shiite shrines.
Although the government bolstered defenses around Baghdad, a series of explosions inside the capital killed at least 19 people and wounded more than 40, police and hospital officials said.
Security at the U.S. Embassy was strengthened and some staff members sent elsewhere in Iraq and to neighboring Jordan, the State Department said.
A military official said about 150 Marines have been sent to Baghdad to help with embassy security.
While the city of 7 million is not in any immediate danger of falling to the militants, food prices have risen — twofold in some cases — because of transportation disruptions on the main road heading north from the capital. The city is under a nighttime curfew that begins at 10 p.m.