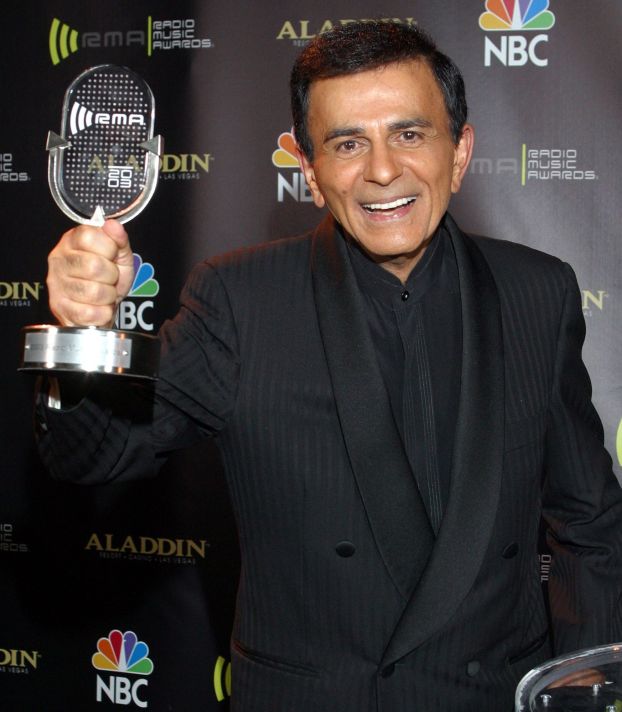 LOS ANGELES (AP) — In pop culture, Casey Kasem was as sweet and dependable as a glass of warm milk and a plate of chocolate chip cookies, which only made the ugliness of his last few years of life seem more bizarre and tragic.
The radio host of “American Top 40” and voice of animated television characters like Scooby-Doo’s sidekick Shaggy died Sunday morning at a hospital in Gig Harbor, Washington. He was 82. He suffered from a form of dementia, and his three adult children from his first wife fought a bitter legal battle with Kasem’s second wife, Jean, over control of his health care in his final months.
That made Kasem a fixture on news outlets that feed on the sleazier side of celebrity life at a time when it wasn’t clear he was aware of it or even able to understand.
This wouldn’t seem all that remarkable for a bad-behaving pop star or actor who shed spouses with the frequency of changing characters. But this was Casey Kasem, whose work epitomized the gentler, romantic side of pop culture, of a time when stars were admired for their celebrity and worshipped for their talent.
“American Top 40,” with Kasem’s soft, homey voice counting down the hits, was a refuge from shock jocks or the screaming big-city radio voices. It was dependable, broadcast on some 1,000 stations at its peak, so if you were driving in Connecticut or Kansas, California or Kentucky, you could always take a measure of the pop charts with Casey.
Kasem weaved stories around the songs, anecdotes about interactions with fans or gee-whiz tales about how stars got their starts. Seldom was heard a discouraging word, unless it was a starting point for a narrative about coming back from hardship, the darkness before the dawn.
Interspersed in the countdowns were the long-distance dedications, songs played for a long-lost or distant lover in the hope a heart would be stirred. You’d wince at some of the hokey song selections, but only the truly cynic would laugh at the emotion that spilled out of the letters Kasem read.
At the end of the show, always, would come Kasem’s signature words of advice: “Keep your feet on the ground, and keep reaching for the stars.”
On the first “American Top 40” in July 1970, Kasem counted down to Three Dog Night’s “Mama Told Me Not to Come” at the No. 1 spot. As the years went on, Kasem progressed through disco and punk, arena rock and rap. All were welcome under Casey’s big tent.
Kasem was of Lebanese descent, born in Detroit as Kemal Amin Kasem, and he spoke out on issues promoting greater understanding of Arab-Americans throughout his life. He made his name as a disc jockey, and when his career blossomed in the Los Angeles area, he took on other voice work. He was Robin in the animated “Batman” series. He once said his work on “Scooby-Doo” would outlast anything he did.
He was succeeded at “American Top 40” in 2004 by Ryan Seacrest, a fan who said he used to imitate Kasem counting down the hits when he was a boy.
“When decades later I took over his AT40 countdown show, it was a surreal moment,” Seacrest said in a statement. “Casey had a distinctive friendly on-air voice, and he was just as affable and nice if you had the privilege to be in his company. He’ll be greatly missed by all of us.”
“Scooby-Doo” may last longer, but we’ll bet Kasem will most be remembered for “American Top 40” and his place in the continuum of pop music accounting, from “American Bandstand” to “Soul Train,” ‘’Total Request Live” to Spotify playlists.
Hard feelings being what they are, it’s difficult to imagine the fight between the people Kasem is leaving behind will simply end with his death. Kasem, at least, is at peace.
And instead of thinking about squabbling, his fans can imagine what it would have sounded like to hear Casey Kasem counting down to John Legend, Pharrell Williams and Iggy Azalea.